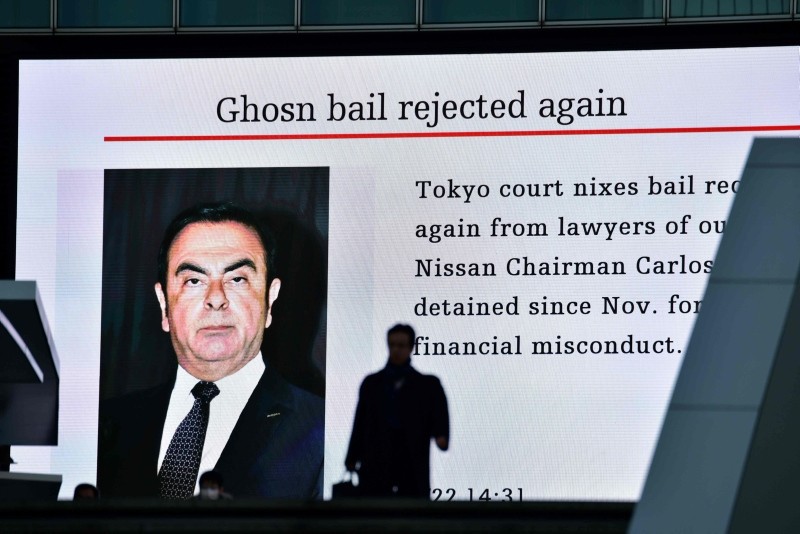 A pedestrian walks past an electric board showing a news program displaying a picture of former Nissan chief Carlos Ghosn in Tokyo on January 22, 2019 (AFP Photo)
by Jan 22, 2019 5:45 pm

Carlos Ghosn is likely to remain in Japanese custody for the foreseeable future after a Tokyo court denied him bail Tuesday despite a last-ditch personal appeal by the former Nissan boss, as Renault set a date to replace him.

The court's decision was expected as it had previously judged him to be a flight risk who could potentially tamper with evidence. Even Ghosn's own lawyer has said his client will likely remain in jail until his trial.

Ever since his arrest out of the blue on November 19 on allegations of financial misconduct, Ghosn's case has been a rollercoaster ride that has kept Japan and the business world gripped.

In the latest twist French firm Renault said it would hold a board meeting Thursday to name his replacement to run the company.

Earlier, a public pledge by the auto tycoon to stay in Japan and wear an electronic tag if necessary appears to have left the Tokyo District Court unmoved.

In a public statement on Monday, Ghosn had set out a series of steps he hoped would convince the court he was not about to flee Japan.

He vowed to hand over his three passports, wear an electronic tagging device and increased the amount of bail money offered.

Ghosn also promised to hire security guards approved by prosecutors to monitor him and said he would not contact anyone connected with the case.

"As the court considers my bail application, I want to emphasise that I will reside in Japan and respect any and all bail conditions the court concludes are warranted," Ghosn said in a statement released by his US-based representatives.

He vowed to attend any subsequent trial "not only because I am legally obligated to do so, but because I am eager to finally have the opportunity to defend myself".

"I am not guilty of the charges against me and I look forward to defending my reputation in the courtroom," concluded the statement.

However, an official at the Japanese justice ministry told AFP: "There is no system in Japan in which a person accused in a criminal case can be released with such a tracking bracelet."

"The court sets the bail sum and can also add appropriate conditions such as limitations on where the accused should stay," added the official.

Ghosn was technically in pre-trial detention after being slapped with three separate charges -- all of which he denies.

Prosecutors believe he under-declared his income in official statements to shareholders between 2010 and 2015 to the tune of some five billion yen ($46 million) in an apparent attempt to avoid accusations he was overpaid.

A second separate but very similar charge is that he continued to do this between 2015 and 2018, under-reporting his income by a further four billion yen.

He also faces a complex charge of seeking to shift personal investment losses onto Nissan's books and transferring company funds to a Saudi contact who allegedly stumped up collateral for him.

Since his arrest, he has been seen in public only once, in a dramatic court appearance where the much thinner executive pleaded his innocence in a packed courtroom.

His wife Carole has appealed to Human Rights Watch, claiming he is being held in "harsh" conditions and subjected to round-the-clock interrogations intended to extract a confession.

Ghosn's arrest has thrown into question the future of the auto alliance he forged, which has come under pressure in his absence.

Nissan immediately ousted him as chairman after the arrest, as did Mitsubishi Motors, the other Japanese firm in the three-way alliance with Renault.

The French government, Renault's biggest shareholder with a stake of more than 15 percent, is particularly keen to see the company appoint a new leader.

Late Sunday, Nissan held an inaugural meeting of a special committee designed to improve governance in the wake of the scandal.

The head of the committee, Seiichiro Nishioka, said the problem was "an excessive concentration of authority in the hands of a single person".

The committee is expected to meet three or four additional times before issuing a final report at the end of March.

French Economy Minister Bruno Le Maire on Sunday denied talk of a potential merger between Renault and Nissan, despite reports in the Japanese media that Paris was pushing for that outcome.