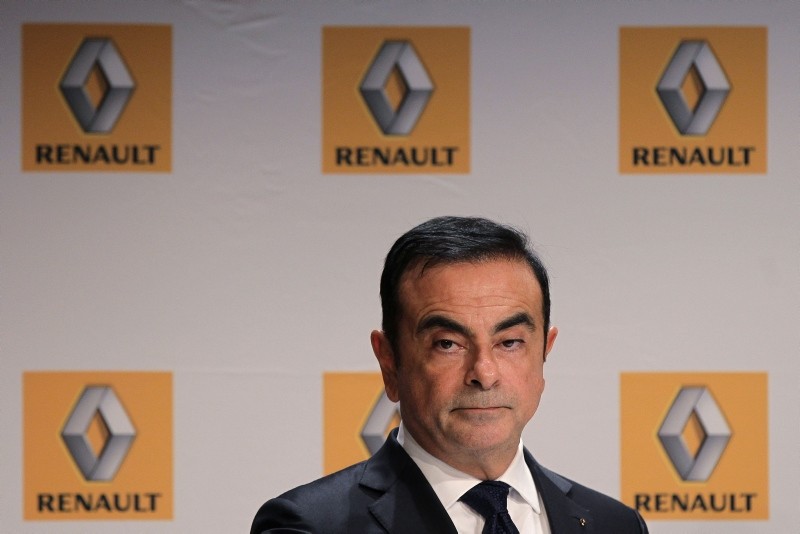 Arrested car boss Carlos Ghosn resigned his position as chief executive and chairman of Renault, ending his leadership roles in the auto industry and signaling the start of a new era for the French manufacturer.

Ghosn, the most powerful man in car-making until his sensational arrest in Japan last November on financial misconduct charges, had already been sacked as chairman of Japanese auto groups Nissan and Mitsubishi.

But the 64-year-old had held on to the top job at Renault, which has been run on an interim basis by one of his deputies while he languishes in a Japanese jail.

French Finance Minister Bruno Le Maire confirmed to AFP that Ghosn tendered his resignation late Wednesday -- ahead of a Renault board meeting in Paris that would have seen him replaced.

A senior director from the firm "received last night the letter of resignation from Carlos Ghosn," Le Maire said.

As head of Renault since 2005, Ghosn was the keystone of its alliance with Nissan and Mitsubishi, forging an industry powerhouse which together sold more cars than any of its rivals last year.

But his career came screeching to a halt when Tokyo police arrested him on suspicion of under-reporting millions of dollars in income over eight years.

Ghosn has denied the charges, but with his release from jail unlikely anytime soon -- his trial has yet to open -- Renault's board was preparing to name new directors.

The company's board is widely expected to name interim chief executive Thierry Bollore as CEO, and Michelin head Jean-Dominique Senard as its chairman -- both roles were previously held by Ghosn.

A board meeting is scheduled for 10:00 am (0900 GMT) at the company's headquarters outside Paris.

Nissan said separately that it would hold an extraordinary shareholders' meeting by mid-April to remove Ghosn from its board, having already stripped the Franco-Lebanese-Brazilian executive of the chairmanship.

"The agenda is to be limited to the discharge of directors Carlos Ghosn and (right-hand man) Greg Kelly, and the appointment of a new director to be nominated by Renault," it said.

The future of the Renault-Nissan-Mitsubishi alliance has been thrown into doubt with the arrest of Ghosn, who is widely credited with reviving Nissan and fusing together two vastly different corporate cultures.

Bollore, a 55-year-old at Renault since 2012, has held various positions in the car industry in Asia and is seen as someone who can maintain stability as the alliance enters a new era.

Media reports have suggested Nissan officials are bristling at suggestions of an even closer integration of their operations, though Le Maire denied such plans over the weekend.

Renault owns 43 percent of Nissan, which in turn has just a 15 percent stake in its French partner -- and no voting rights.

But Nissan's market value is nearly double that of Renault's, prompting some to expect the Japanese side will seek to rebalance the terms of their relationship.

It remains unclear, for example, who will replace Ghosn as head of the alliance. That role traditionally has been reserved for Renault's CEO, while Nissan chooses its vice president.

Senard, for his part, is understood to have the backing of the French state, which owns just over 15 percent of Renault and holds 22 percent of the voting rights.

With a ready smile and elegant attire, Senard has successfully negotiated sensitive labour agreements with trade union leaders in Michelin's French factories to preserve jobs in the face of cheaper imported Asian products.

Alliance 'not in danger'

Ghosn is expected to stay behind bars for several months after seeing a second bail request denied on Tuesday. His own lawyer has warned that a trial could take at least six months to organise given the complexity of the case.

He faces three separate charges: two of under-declaring his income by tens of millions of dollars over eight years and another of seeking to shift personal investment losses onto Nissan.

The 64-year-old executive has been seen in public only once since his arrest on November 19 stunned the business world -- in a dramatic courtroom appearance where he passionately denied the charges and declared his "genuine love" for Nissan.

Current Nissan CEO Hiroto Saikawa, who oversaw his former mentor's downfall, has stressed that the alliance is "absolutely not in danger".

But the Japanese firm now outperforms its French "superior" -- selling 5.81 million cars in 2017 compared with 3.76 million for Renault.

This has led to grumbling within Nissan that its weight is not properly represented and even to conspiracy theories that Ghosn's downfall was orchestrated by frustrated Nissan executives -- which Saikawa dismisses as "absurd".