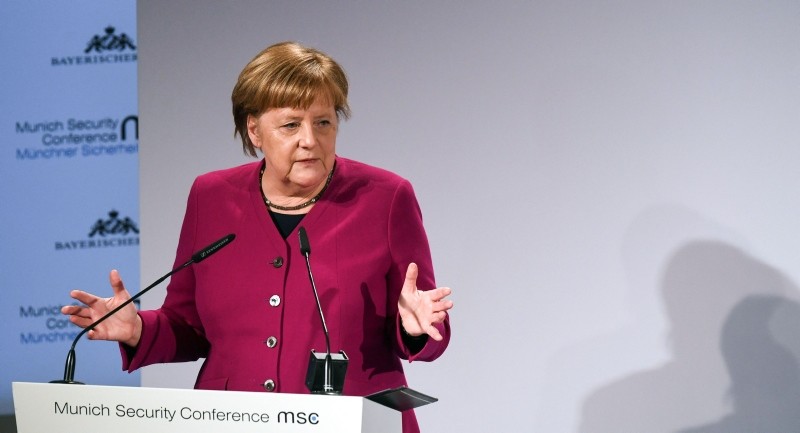 German Chancellor Angela Merkel said Saturday that she finds it frightening that the U.S. sees European car imports as a national security threat.

Merkel expressed her concern that U.S. President Donald Trump might introduce new special trade tariffs on German vehicles as the US Department of Commerce considers imports of European vehicles a national security threat.

Speaking at the Munich Security Conference on Saturday, Merkel said this was a source of alarm for Germany's key automotive sector.

Merkel pointed out that the biggest car plant of German luxury brand BMW was not in Bavaria but in South Carolina, from where it exports vehicles to China.

"All I can say is it would be good if we could resume proper talks with one another," she said at the Munich Security Conference.

A US Commerce Department report has concluded that auto imports threaten national security, setting the stage for possible tariffs by the White House, two people familiar with the matter said Thursday.

The investigation, ordered by President Donald Trump in May, is "positive" with respect to the central question of whether the imports "impair" US national security, said a European auto industry source.

"It's going to say that auto imports are a threat to national security," said an official with another auto company.

The report, which is expected to be delivered to the White House by a Sunday deadline, has been seen as a major risk for foreign automakers.

Trump has threatened to slap 25 percent duties on European autos, especially targeting Germany, which he says has harmed the American car industry.

After receiving the report, the US president will have 90 days to decide whether to move ahead with tariffs.

Trump in July reached a trade truce with European Commission President Jean-Claude Juncker, with the two pledging no new tariffs while the negotiations continued.

Brussels has already drawn up a list of 20 billion euros ($22.6 billion) in US exports for retaliatory tariffs should Washington press ahead, the commission's Director-General for Trade Jean-Luc Demarty told the European Parliament last month.