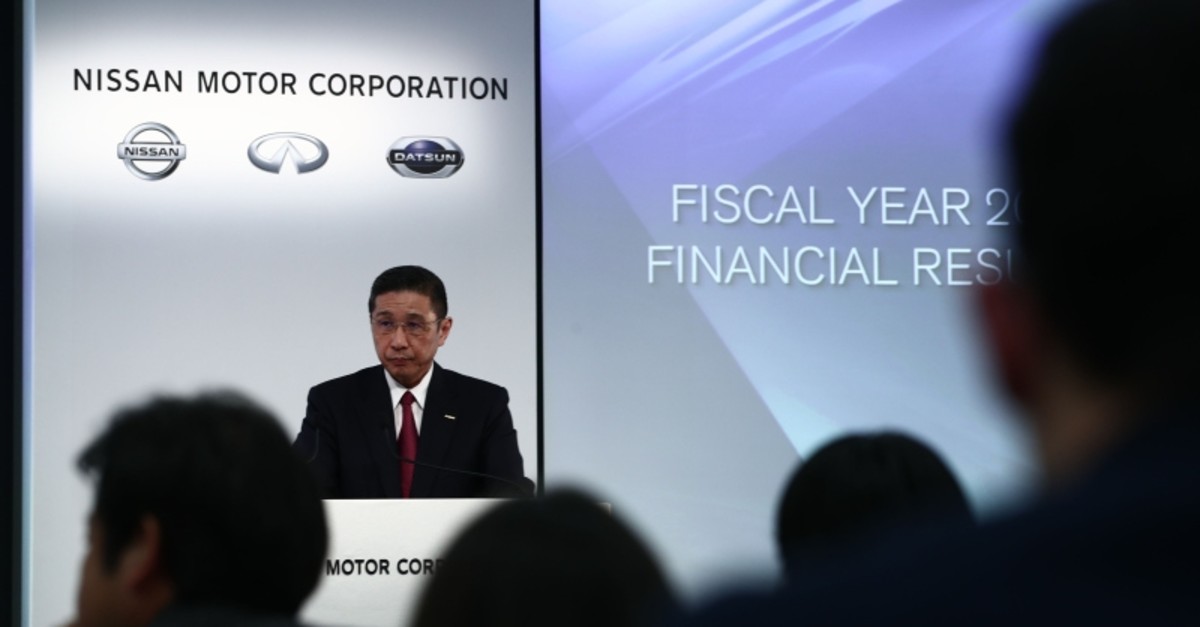 Nissan Motors president and CEO Hiroto Saikawa speaks during a press conference to announce the companyu2019s 2019 financial results at its headquarters in Yokohama on May 14, 2019. (AFP Photo)
by Associated Press May 14, 2019 3:59 pm

Japanese automaker Nissan, reeling from the arrest of its former chairman Carlos Ghosn, reported Tuesday that annual profit nose-dived to less than half of what it earned the previous year, and forecast even dimmer results going forward.

Nissan Motor Co.'s profit for the fiscal year ended March totaled 319.1 billion yen ($2.9 billion), down from 746.9 billion yen the previous fiscal year — the worst showing since the global financial crisis a decade ago.

Yokohama-based Nissan said profit for the fiscal year through March 2020 will drop to 170 billion yen ($1.5 billion), as its earnings are slammed by restructuring and product development expenses combined with currency-related losses and rising material costs.

"This is a very critical situation," Nissan's chief executive, Hiroto Saikawa, told reporters at its headquarters in Yokohama, calling the crisis "rock bottom."

He said efforts were underway to reshape Nissan's business, especially in North America, where profits have dropped because of incentives and over-production.

Saikawa promised that Nissan's business will be turned around over the next two or three years. He blamed what he called an overly aggressive sales growth strategy spearheaded by Ghosn, though Saikawa himself has faced criticism over his leadership since he became CEO in 2017.

Saikawa apologized to customers and shareholders for the shoddy results, giving a short bow rather than the usual deep bow held for nearly a minute by Japanese executives apologizing for corporate wrongdoing.

Ghosn, who led Nissan and its alliance with Renault SA of France for two decades, was arrested in November on financial misconduct charges. He has been accused of under-reporting retirement compensation, having Nissan shoulder investment losses and diverting Nissan money for personal gain.

On Tuesday, Tokyo prosecutors said they had amended one of their indictments against Ghosn to include an allegation that he received $20 million from a Saudi Arabian businessman in connection with a currency swap deal cited in a charge of breach of trust.

He says he is innocent. He says the compensation was never paid or agreed upon, the losses were never suffered and the payments were for legitimate services.

The scandal over Ghosn's arrest and dismissal added to Nissan's problems. It logged 9.2 billion ($83 million) in costs for the fiscal year through March from alleged underreporting of Ghosn's compensation. Some analysts say the brand has been tarnished.

It is unclear when Ghosn's trial will start, as preparations in Japan take months. Prosecutors wanted Ghosn kept incarcerated during the preparation, but he was released on bail in March, rearrested and then released again in April.

The latest release forbids Ghosn, a Brazilian-born Frenchman of Lebanese ancestry, from contact with his wife, a restriction that prosecutors have defended as necessary to prevent evidence tampering.

Saikawa brushed off speculation that Renault may be pushing for a merger, saying Renault Chairman Jean-Dominique Senard, who recently joined Nissan's board, agrees that fixing Nissan comes first.

Saikawa also brushed off a reporter's question about his resignation. He said he planned to hand over the reign to another leader "when the timing is right."

For now, he said, he needs to focus on a turnaround.