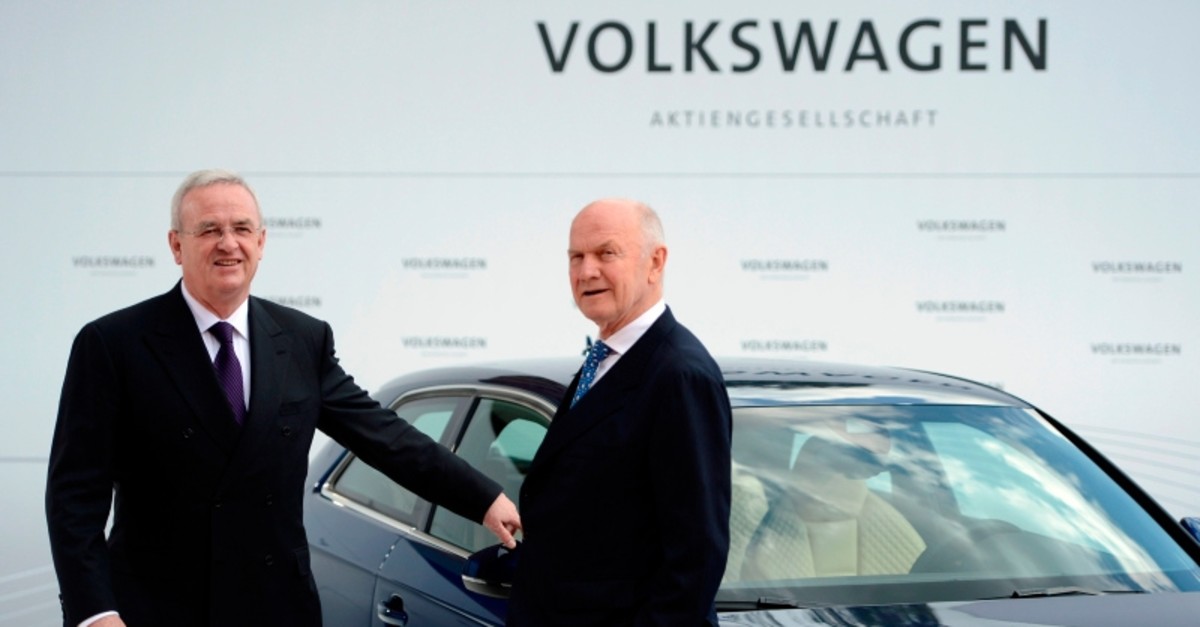 In this file photo taken on April 23, 2012, then Volkswagen CEO Martin Winterkorn (L) and then chairman of the supervisory board of Ferdinand Piech pose next to an Audi A3 electric car at the VW plant in Wolfsburg, Germany. (AFP Photo)
by Compiled from Wire Services Aug 27, 2019 12:28 pm

German auto industry power broker Ferdinand Piech, the longtime patriarch of Volkswagen AG and the key engineer of its takeover of Porsche, has died, his widow confirmed Monday. He was 82.

His wife, Ursula Piech, told the dpa news agency in a statement provided by their family lawyer that her husband died Sunday "suddenly and unexpectedly" but did not give a specific cause.

Piech collapsed while at a restaurant with Ursula in Rosenheim in the German state of Bavaria, she said in statement emailed to dpa by the family lawyer, Christian Schertz. The Bild newspaper initially reported his death.

"Ferdinand Piech's life was marked by his passion for the automobile and for the workers who built them," she wrote. "He was an enthusiastic engineer and car lover until the end."

Piech — a grandson of Ferdinand Porsche, who founded the company that bears his name and designed the first version of VW's signature Beetle — was an auto industry mainstay for more than four decades.

He was credited with turning around Volkswagen in the 1990s, leading it back to profit during a nine-year stint as chief executive. He then became the company's supervisory board chief — a post in which he wielded unusual influence.

He crowned his career with his starring role in a long-drawn-out drama in which luxury automaker Porsche first tried to take over Volkswagen, then had the tables turned on it by the mass-market giant.

However, he stepped down as board chairman after losing a power struggle with then-CEO Martin Winterkorn in 2015, a few months before a scandal over diesel emissions-rigging shook the company and prompted Winterkorn's resignation.

Piech was born in Vienna on April 17, 1937, the son of Louise Porsche and Anton Piech, an early manager of Volkswagen's main Wolfsburg plant.

He started work at Porsche in 1963 and gained responsibility for testing and development. While working as a 31-year-old development chief at Porsche in 1968, Piech invested two thirds of Porsche's annual budget to build 25 Porsche prototype racecars with an untested 600 horsepower air-cooled 12-cylinder engine design.

Family members accused Piech of misconduct due to his risk appetite and willingness to bet the company's budget on a single vehicle, but the Porsche 917 went on to become one of the most successful racecars in history, cementing his status as a visionary engineer.

Piech moved in 1972 to Audi, where he remained for two decades — although he retained an interest in Porsche via his family. He became Audi's chief executive in 1988, pushing through a cost-saving program that improved the luxury automaker's results. Piech introduced quattro four-wheel drive technology to Audi, and transformed it into a credible competitor to Mercedes-Benz and BMW.

Piech took over as chief executive of Audi parent Volkswagen in January 1993 at a time when the company was in crisis.

He was credited with leading it back into profit — cutting the work week from five days to four, negotiating firmly with suppliers, and overseeing the success of popular new Golf and Passat models.

Piech had a reputation for ramming through ideas in the face of internal resistance. He ignored doubters and re-created the 1960s Beetle as the New Beetle, a hit in the key North American market.

Volkswagen expanded its reach at both ends of the market during Piech's reign. At the lower end, it bought Czech carmaker Skoda after the collapse of communism; upmarket, it also took over the Bentley, Bugatti and Lamborghini brands and made its own venture into the luxury sector with the Phaeton sedan. Motorcycle brand Ducati and the MAN and Scania truck businesses were also among the brand included in the VW empire.

A brilliant engineer, Piech turned around VW after betting on a modular construction technique which allowed Audi, Skoda and VW brands to share up to 65% common parts, helping Volkswagen Group, the world's largest carmaker by sales, to attain greater economies of scale.

During his nine-year tenure as CEO, Piech turned a loss equivalent of 1 billion euros ($1.1 billion) into a 2.6 billion euro profit.

Piech stepped back from front-line management in 2002, when he was succeeded as CEO by Bernd Pischetsrieder. But he remained very much a power behind the scenes in his new role as chairman of the supervisory board, the German equivalent of a U.S. board of directors.

Together with Winterkorn, Piech steered the ever-widening VW empire with a strict hand, in a hierarchical and centralist manner.

The German news magazine Der Spiegel once described the atmosphere at Volkswagen under the duo as "North Korea without the labour camp."

Governance at VW was for decades marked by a cutthroat management style which did not tolerate failure, a culture that was later blamed for causing VW managers to lie about illegal emissions, rather than admitting that their cars could not meet clean air rules.

A corruption scandal that erupted in 2005 cast an unflattering light on practices at Volkswagen during Piech's reign, centering on privileges improperly received by employee representatives, among them trips abroad that involved prostitutes. But the company patriarch himself was untouched by the fallout from an affair that brought down his long-serving personnel chief, Peter Hartz, among others.

In March 2006, Piech asked to meet prosecutors as a witness and told them that he had known nothing of alleged improper spending. He was never a suspect in the case.

Piech was, however, central in a new bout of turbulence at Volkswagen in subsequent years as Porsche — controlled by members of the Piech and Porsche families — ramped up its holding in Volkswagen.

The move was first billed as protecting Volkswagen from any hostile takeover, then turned into a full-fledged takeover attempt that triggered a power struggle among the Piech and Porsche families.

Porsche and its ambitious CEO, Wendelin Wiedeking, overreached — building up a 51% stake in Volkswagen, but loading Porsche with debt just as the economy turned sour in 2008.

VW and Piech then pushed for a deal to fold the lucrative luxury-car business into VW's portfolio, widening its range in anticipation of a recovery in the luxury market.

They got their way in a 2009 deal that saw Wiedeking ousted.

"Piech saw Wiedeking as an impetuous risk-taker who had designs on grabbing a disproportionate amount of power for himself," IHS Global Insight analyst Tim Urquhart said at the time.

Piech abruptly stepped down as board chairman in April 2015 after failing to get his way on the future of Winterkorn, who had been at the helm for eight years. A few weeks earlier, he had said in an interview with Der Spiegel that he was distancing himself from the CEO — but gave no public reason for the remark, which led to a clash with other board members.

His colleagues said he hadn't consulted with them and pushed back, and the board backed Winterkorn. Eventually, the company said top board members had decided that "the necessary mutual trust necessary for successful cooperation does not exist."

That upheaval was overshadowed in September 2015 when news broke that Volkswagen had installed software designed to defeat tests for nitrogen oxide emissions in diesel engines in the U.S. and, the company then said, in 11 million cars worldwide. The scandal rocked the company and cost it 30 billion euros in fines and legal settlements.

Winterkorn resigned and was replaced by Matthias Mueller. As the scandal raged, longtime chief financial officer Hans Dieter Poetsch was chosen to head the supervisory board, filling the position vacated months earlier by Piech.

Piech angered members of his family at the height of the emissions scandal when he claimed he had alerted key VW directors in February 2015 to the affair. He agreed in 2017 to sell a large share of his holding in his family's firm Porsche SE, which controls VW, to younger members of the dynasty.

Piech had 13 children from several relationships and twice as many grandchildren. He married his second wife, Ursula, in 1984, and the couple moved to Salzburg, Austria after Piech gave up the CEO job at Volkswagen. Ursula Piech was elected to Volkswagen's supervisory board in 2012, but resigned her seat along with her husband.