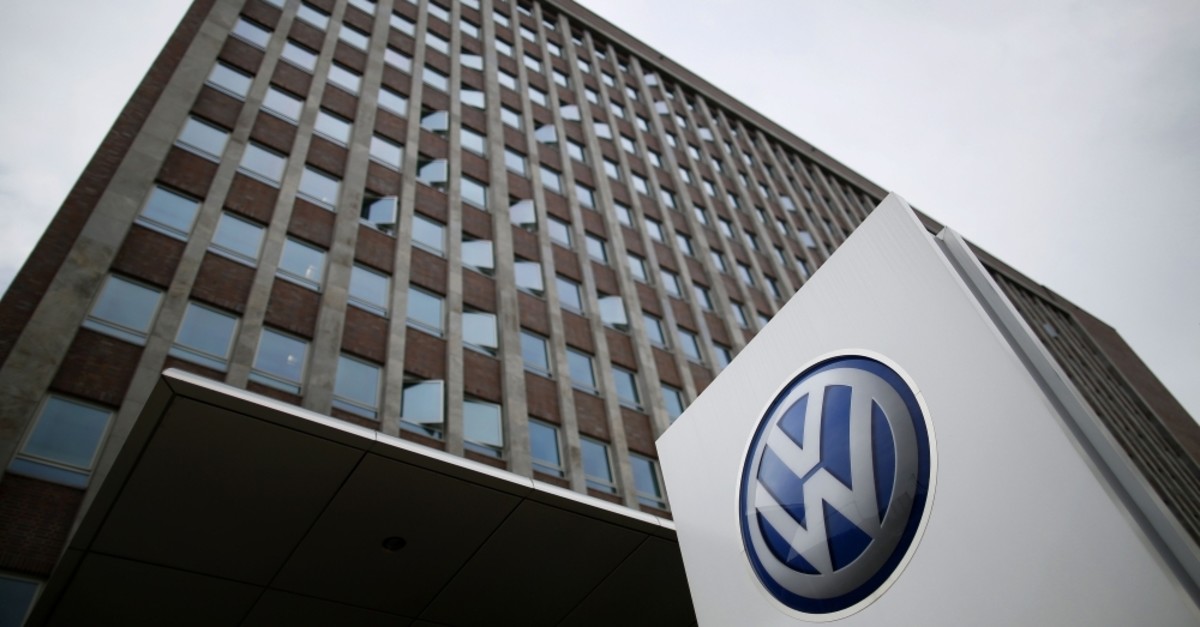 The logo of German carmaker Volkswagen (VW) outside the main administrative building of the Volkswagen brand at the VW plant in Wolfsburg. (AFP Photo)
by Daily Sabah Oct 17, 2019 6:26 pm
German car manufacturer Volkswagen has not stopped its investment in Turkey, Deputy Trade Minister Rıza Tuna Turagay said Thursday.
Volkswagen on Tuesday announced it has postponed the final decision on whether to build a car plant in Turkey, amid international criticism of Ankara’s military operation in northern Syria.
On a question regarding a delay or even cancellation of a VW investment on the sidelines of an event in Istanbul, Turagay stressed it is not the case at the moment.
“Let us put it clearly. VW’s investment will continue. It is currently ‘on hold,’ which is something originating from the current conjuncture. Continuous speculation about this is also not pleasant. Ultimately the company’s board has taken a decision. The company was established within the framework of that decision, and necessary steps will be taken in this scope. I do not see any negativity there,” he emphasized.
Turgay’s remarks come after the carmaker was reported on Tuesday to have decided to postpone the final decision on whether to build a car plant in Turkey as a result of the country’s military offensive in northern Syria.
Turkey launched Operation Peace Spring, the third in a series of cross-border anti-terror operations in northern Syria targeting terrorists affiliated with Daesh and the PKK’s Syrian offshoot the People’s Protection Units (YPG), on Oct. 9.
Turkey’s military offensive, conducted in line with the country’s right to self-defense borne out of international law and U.N. Security Council resolutions, aims to establish a terror-free safe zone for Syrians return in the area east of the Euphrates River controlled by the U.S.-backed Syrian Democratic Forces (SDF), which is dominated by YPG terrorists.
Turkey has long decried the threat from terrorists east of the Euphrates in northern Syria, pledging military action to prevent the formation of a "terrorist corridor" there. Since 2016, Turkey's Euphrates Shield and Olive Branch operations in northwestern Syria have liberated the region from YPG/PKK and Daesh terrorists, making it possible for nearly 400,000 Syrians who fled the violence to return home.
“The decision for the new plant was adjourned by the board of management of Volkswagen AG,” the company was cited as saying in a statement on Tuesday. “We are monitoring the situation carefully and are worried about the current developments.”
The German carmaker has not announced the cancellation of the project, but only declared a delay in its announcement that was previously planned to be made by President Recep Tayyip Erdoğan and German Chancellor Angela Merkel. Since the ties between the two countries which have soured due to the operation in the recent period do not currently allow a meeting between the two leaders, the plan for the announcement has been put off.
Earlier this month, the carmaker established a subsidiary in Turkey’s western Manisa province.
The unit plans to carry out a wide range of production processes at the new plant, particularly the design, manufacture and assembly of automobiles, trucks and other vehicles, as well as their parts and components. The sale, import and export of these products will also be managed from the Manisa location.
Some officials had also said late last month the company was nearing a decision on building a new plant in Turkey.
Giving more details on the plans, sources close to the company said the multi-brand factory would cost more than 1 billion euros ($1.11 billion). Sources said the plant would likely produce 300,000 cars a year, the VW Passat and nearly identical Skoda Superb models, for export to Eastern Europe.
It would employ near 4,000 in Manisa near İzmir in western Anatolia and construction could start at the end of 2020 with production starting in 2022, they said.
In November 2018, the carmaker had announced intentions to build a new industrial factory in Eastern Europe.
As time went on, multiple rumors concerning who would host VW’s new plant hit the headlines. Initially, the company’s list of potential hosts included five countries, but the list has since narrowed the choice down to Turkey and Bulgaria as the most likely locations.
Last Update: Dec 20, 2019 1:06 am
RELATED TOPICS