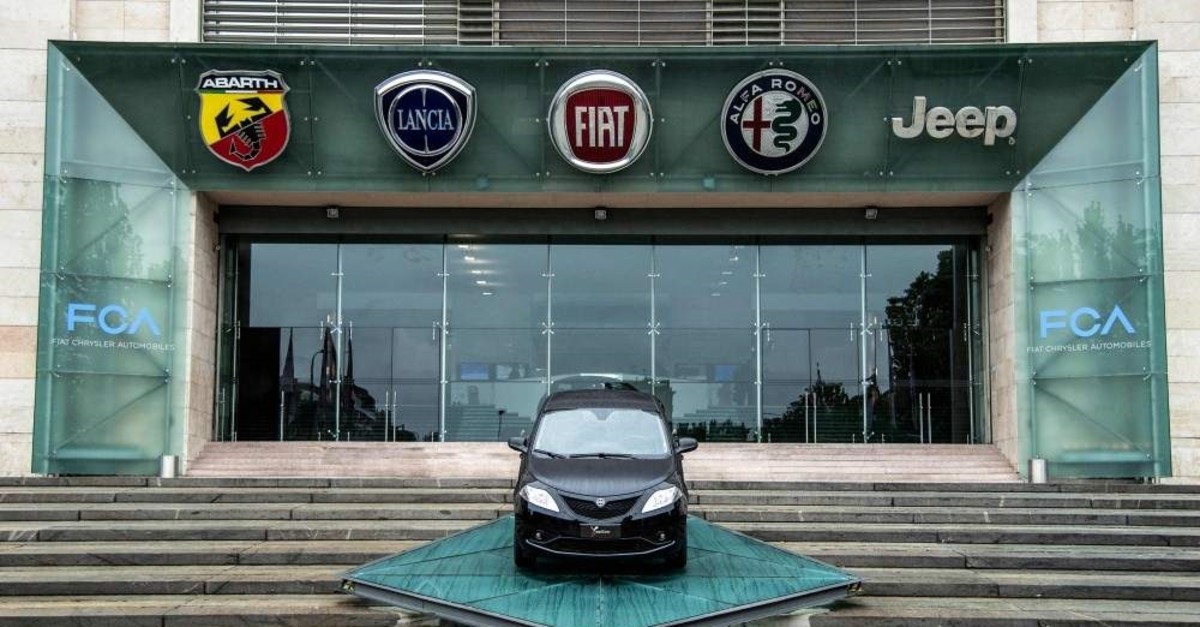 In this file photo taken on May 27, 2019, the logos of automobile companies (L-R) Abarth, Lancia, Fiat, Alfa Romeo and Jeep are pictured at the entrance to the Fiat Chrysler Automobiles (FCA) at the Fiat Mirafiori car plant in Turin, Italy. (AFP Photo)
by Nov 21, 2019 1:26 am

General Motors filed a federal lawsuit against Fiat Chrysler on Wednesday, alleging its rival bribed auto union officials to secure an unfair advantage in labor talks and to force it to agree to a merger.

The lawsuit points a finger at the late Sergio Marchionne, FCA's former chief executive, accusing him of being a central player in a conspiracy with corrupt United Auto Workers officials to support a tough contract on GM that would then force GM into a merger with FCA.

It references guilty pleas by former FCA executives, who bribed former UAW officials, in a long-running case involving a UAW employee training program at both FCA and GM, that has tarnished the union's image.

The suit comes only weeks after the UAW ended a lengthy strike at GM. The union is currently immersed in labor talks with FCA, the last of Detroit's "Big Three" to negotiate after workers ratified contracts with GM and Ford.

"FCA was the clear sponsor of pervasive wrongdoing, paying millions of dollars in bribes to obtain benefits, concessions, and advantages in the negotiation, implementation, and administration of labor agreements over time," GM said in its announcement.

The suit also implicates Marchionne, who died in 2018 and is depicted as an architect of a scheme to pressure GM into a merger with his company, in part by manipulating labor contract talks in a way that benefited FCA and harmed GM.

Marchionne "schemed to use the collective bargaining process to harm GM by becoming the lead in negotiations and attempting to force a merger of the companies," the GM lawsuit said.

"For years, Marchionne had made clear to GM his desire to merge companies, voluntarily or through force."

After GM rejected the pitch, Marchionne and others at FCA schemed with corrupt UAW leaders to tilt the labor negotiations in a way "that could impose unanticipated costs on GM in order to force a merger," according to the claim.

FCA dismissed the lawsuit as "meritless" and said it was timed to disrupt its own proposed merger with French automaker PSA, as well as ongoing talks with the UAW.

"We are astonished by this filing, both its content and its timing," FCA said in a statement that also alluded to the company's ongoing labor talks with the UAW.

"We can only assume this was intended to disrupt our proposed merger with PSA as well as our negotiations with the UAW."

GM did not name the UAW or any of its officials as defendant.

A spokesman for the UAW said the union contracts were not affected by the bribery scandal but it was "regrettable" the scandal had cast doubt on the process and that the union was committed to cleaning itself up.

Iacobelli went on to work at GM for more than a year after leaving FCA in 2015.

A GM spokesman said the company hired Iacobelli "without knowledge of the bad acts that he had committed on FCA's behalf" and is "not aware of any misconduct by Mr. Iacobelli while he worked for GM."

Those charged include a couple of UAW officials who worked in the GM department and have pleaded guilty in the probe.

About a dozen current and former UAW officials and auto industry executives have been charged in the probe, which centers on revelations that they enriched themselves through the Center for Human Resources, a joint body run by the auto companies and the union that was meant to train workers.

The Justice Department also has brought criminal charges against former UAW vice president Joe Ashton, who also served on the GM board.

The union took another step Wednesday to move past the scandal, announcing that its executive board had filed to remove Gary Jones as president, and Vance Pearson as UAW regional director, and to expel them from the union after they submitted false expense records to the UAW.

Jones' home was raided in connection with the probe, while Pearson was charged criminally in September.

"This is a somber day, but our UAW Constitution has provided the necessary tools to deal with these charges," UAW Acting President Rory Gamble said in a statement Wednesday.

"We are committed at the UAW to take all necessary steps including continuing to implement ethics reforms and greater financial controls to prevent these type of charges from ever happening again."

The UAW last week unveiled tighter controls on financial accounting and plans to establish an ethics hotline, among other reforms.

Shares of both GM and FCA suffered bigger losses than the broader market following news of the lawsuit. GM fell 3.1 percent at $35.26, while FCA shed 3.7 percent to $15.