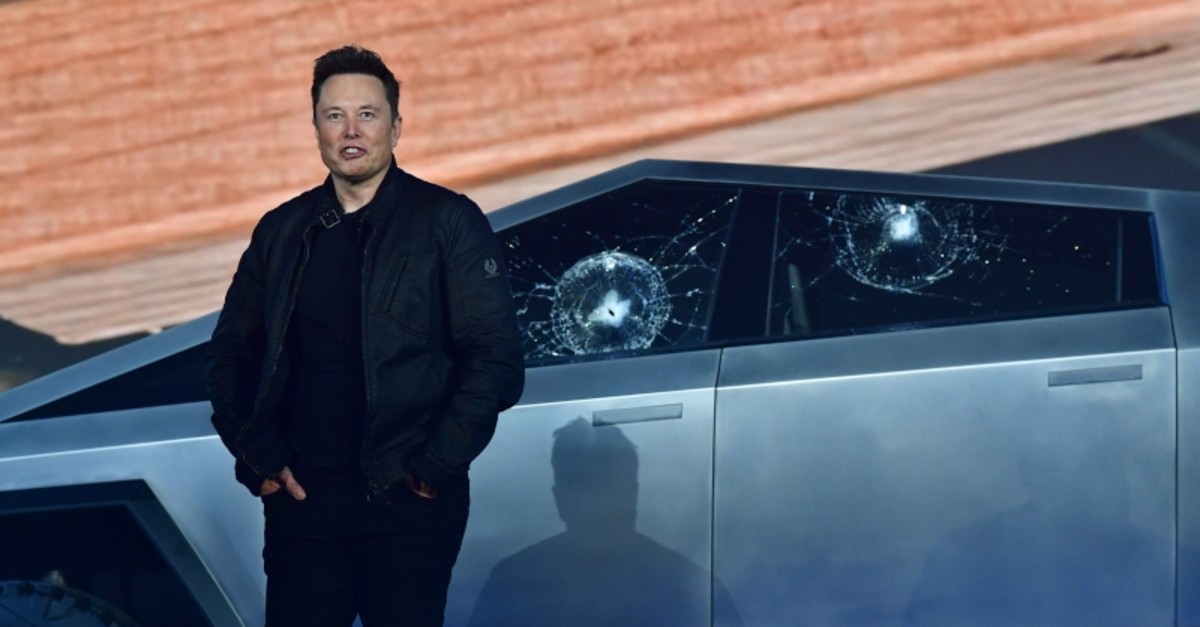 Tesla co-founder and CEO Elon Musk stands in front of the shattered windows of the newly unveiled all-electric battery-powered Tesla's Cybertruck at Tesla Design Center in Hawthorne, California on November 21, 2019.(AFP Photo)
by Compiled from Wire Services Nov 22, 2019 10:45 am

The big reveal of Tesla's electric pickup went embarrassingly wrong when the supposedly impact-proof windows smashed, leaving a flustered Elon Musk to flounder through the rest of his presentation in front of a badly damaged vehicle.

The Tesla co-founder unveiled the all-electric battery-powered Tesla Cybertruck in California on Thursday, daring staff to hit the vehicle with sledgehammers and showing a video of it withstanding bullets shot from a 9mm gun.

But the demonstration of the vehicle's indestructible windows didn't appear to go entirely to plan after one assistant threw a steel ball bearing at the truck – only to see the armored glass smash.

An expletive could be heard at the Tesla Design Center and as his assistant laughed nervously, Musk said: "Well, maybe that was a little too hard."

A second attempt fared little better however, and another window was left badly damaged.

"It didn't go through," said a clearly uncomfortable Musk, who was forced to push on through the remainder of the chaotic launch with the two smashed windows in full view.

The industrial-looking Cybertruck – covered in the same steel alloy Musk plans to use for his SpaceX rocket – will have a starting price of $39,900 and can go from 0 to 100 kilometers (62 miles) per hour in about three seconds, the Tesla chief executive claimed.

No date has been given for its release but analysts said it would not be ready before the end of 2021 at the earliest.

Tesla dominates the global electric car market and has an especially firm grip on the United States.

FORD, GM GEAR UP TOO

Tesla's focus on the high-performance end of the market is only natural given the success of Ford's 450-horsepower F-150 Raptor truck, which launched in 2009 and whose sales have since risen annually, according to Ford spokesman Mike Levine.

While Ford does not disclose Raptor sales, Levine said annual demand is well above 19,000 vehicles and the No. 2 U.S. automaker has never had to offer incentives on the model, which costs in the high $60,000 range. Ford also offers the more expensive F-150 Limited, its most powerful and luxurious pickup.

Ford and GM are also gearing up to challenge Tesla more directly with new offerings like the Ford Mustang Mach E electric SUV as well as electric pickups.

Electric pickups and SUVs could help Ford and GM generate the significant EV sales they will need to meet tougher emission standards and EV mandates in California and other states.

The Trump administration is moving to roll back those standards, but electric trucks are a hedge if California prevails.

Demand for full-size electric pickup trucks in the near term may not be huge, however.

Industry tracking firm IHS Markit estimates the electric truck segment – both full- and mid-sized models – will account for about 75,000 sales in 2026, compared with an expected 3 million light trucks overall. The Tesla truck is not part of that estimate.

Ford aims to sell an electric F-series in late 2021, sources familiar with the plans said. It also will offer the Mach E next year as part of its plan to invest $11.5 billion by 2022 to electrify its vehicles.

In April, Ford invested $500 million in startup Rivian, which plans to build its own electric pickup beginning in fall 2020.

GM plans to build a family of premium electric pickup trucks and SUVs, with the first pickup due to go on sale in the fall of 2021. It plans to invest $8 billion by 2023 to develop electric and self-driving vehicles.