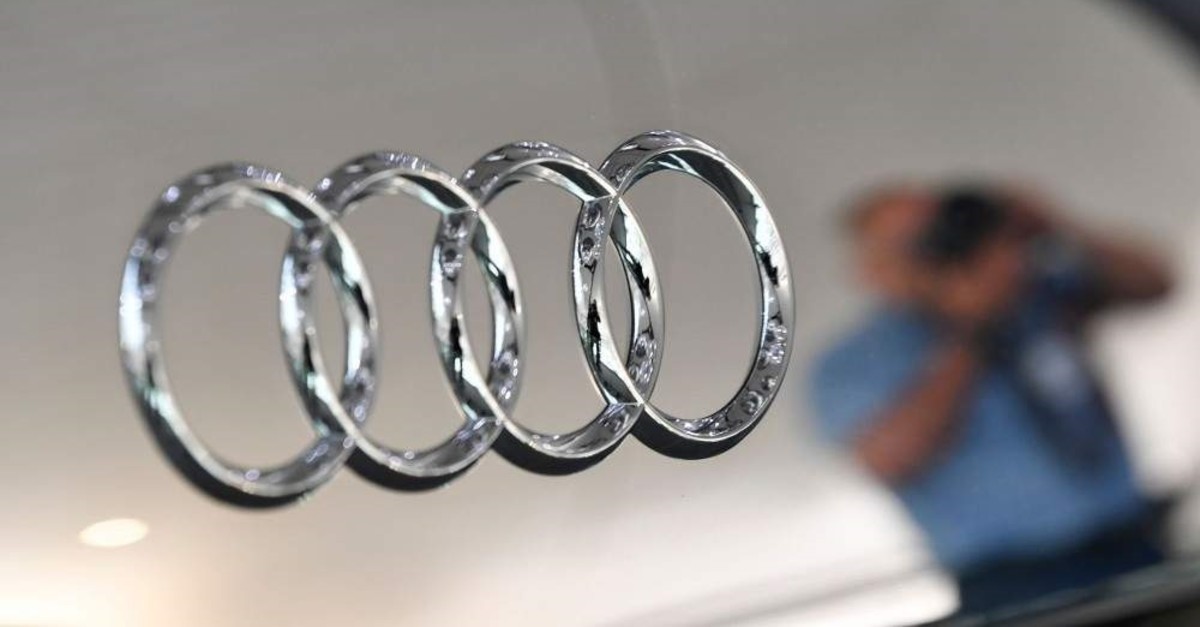 A photographer is reflected next to the logo of German carmaker Audi at the company's annual shareholders' meeting in Neckarsulm, Germany, May 23, 2019. (AFP Photo)
by Compiled from Wire Services Nov 26, 2019 8:15 pm
Volkswagen subsidiary Audi says it’s cutting 9,500 jobs in Germany through 2025 as part of a transformation plan to make the company “lean and sustainable.”
The Ingolstadt-based automaker said Tuesday that at the same time, it expects to add 2,000 new positions for a net job loss of 7,500 jobs.
Audi currently employs some 90,000 people around the world, including 60,000 in Germany, but has been struggling to keep up with domestic rivals BMW and Daimler in recent years.
Some of its cars have also been part of the diesel emissions cheating scandal, which has centered on parent company Volkswagen.
Part of Audi’s plan includes ensuring that new electric cars will be built at its plants in Ingolstadt and Neckarsulm in Germany.
Audi said the reorganization would help boost earnings by 6 billion euros ($6.6 billion) by 2029, keeping the premium brand on track to reach a profit margin of nine to 11%.
New CEO
The job losses come after Audi was hit by falling sales, revenues and operating profits over the first nine months of 2019.
But the company is far from alone in feeling the pain from an industry in the throes of transformation and buffeted by the knock-on effects from U.S.-China trade tensions and Brexit uncertainty.
German car parts suppliers Bosch and Continental have themselves announced thousands of job cuts to slash costs, while Mercedes-Benz maker Daimler is reportedly planning to axe 1,100 managerial roles.
Hoping to turn the tide at Audi, the Volkswagen group earlier this month said it had picked former BMW purchasing chief Markus Duesmann to replace Schot as the brand's chief executive from April.
Under Schot, Audi suffered more than other German manufacturers from the introduction last year of strict new emissions testing standards in the European Union, which led to expensive production bottlenecks.
And like its rivals, Audi is spending billions on new technologies, including battery-electric and hybrid vehicles, connectivity and autonomous driving.
But the firm last year also had to pay an 800 million euro fine over its role in the "dieselgate" scandal.
The saga erupted in 2015 when the Volkswagen group admitted to installing cheating devices in 11 million diesel cars worldwide to dupe regulatory emissions tests.
Audi's engineers are suspected of having helped developed the software used to make cars emit less pollutants under lab testing conditions than on the road.
Last Update: Dec 20, 2019 1:57 am
RELATED TOPICS