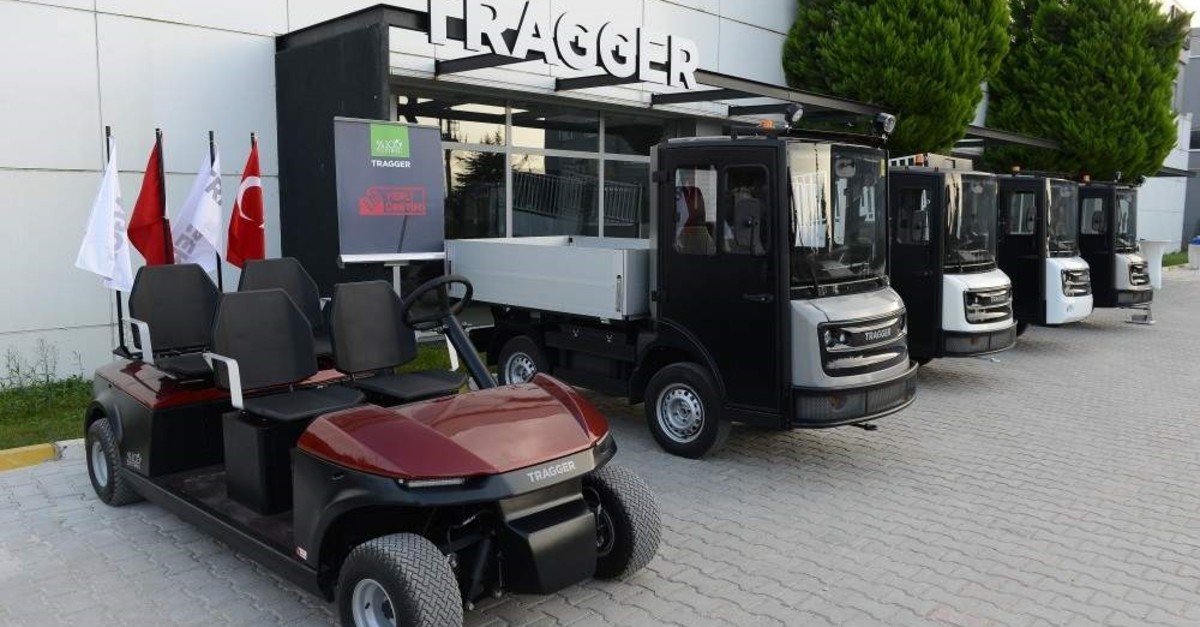 Some of the electric utility vehicles produced domestically by Turkish manufacturer TRAGGER in Bursa. (AA Photo)
by Daily Sabah with AA Dec 02, 2019 6:45 pm
Electric utility vehicles produced entirely with domestic means in the northwestern province of Bursa have started being exported to Germany and Australia.
Vehicles manufactured by TRAGGER under the same name have attracted attention for their 85% fuel efficiency, fewer parts than internal combustion engines and advantages in maintenance costs.
Electric utility vehicles are heavily used in touristic facilities, hotels, holiday resorts, university campuses, city hospitals, ports, airports, factories and indoor areas. While they are being exported with the slogan “domestic and national” currently, the objective is to increase the number of overseas markets they are exported to.
Ali Serdar Emre, one of the founders of TRAGGER which operates in the Hasanağa Organized Industrial Zone, said they came together in 1998 to transfer technology to Turkey, and later started working on parts and vehicle design.
Emre told Anadolu Agency (AA) that they started in the automotive industry from scratch.
“We set out entirely for exports but in order to sell a product abroad, you must be successful in your own country first. In order to produce a successful product in your country, you need to achieve technical excellence,” he said.
Pointing out that they aimed to be successful in Turkey with vehicles that have been in mass production for almost two years and then with other vehicles to be produced at the beginning of next year, Emre said: “We think we have come a long way with this. We started exporting our first vehicles abroad (Germany and Australia). These are vehicles with certain functionality added to them.”
He added that they have pickup utility trucks in their professional line, noting that these vehicles are produced at an advanced level of engineering. “Technical teams coming from abroad to take the franchise of our vehicles and carry out inspections tell us that these vehicles are much stronger than their counterparts. There is much demand. We want to grow the export target in 2022. We work in areas such as virtual reality, and we aim to make a difference by integrating them into vehicles,” he said.
CONVENIENCE FOR WASTE COLLECTION IN CITIES WITH NARROW STREETS
Saffet Çakmak, one of the founding partners, said he has been friends with Emre since university, underlining that they started working as two idealistic young men and that they have produced and exported electric utility vehicles backed by years of experience.
Highlighting that they named the company “TRAGGER” with the aim of becoming a global company, Çakmak continued: “We are a local company, but we are also a company that develops design and software. We wanted to be able to sell products all over the world without transferring too much technology from abroad and without being too dependent. Turkey is quite good in commercial vehicles, one of the world's leading countries.”
Emphasizing that the automotive sector has reached a point of change with electric vehicles, he remarked that this is an opportunity for them. “There is a competition in the world about building small vehicles. We have entered the electric utility vehicle sector to show that such products can be designed and produced in our country as well,” he said.
Pointing out that they first put emphasis on a design that attracts people, Çakmak said the vehicle has a lean design compared to its counterparts, reduced maintenance costs and shorter repair durations. Providing information about the particulars of the vehicle, he added: “Since it is quite small in size, it can maneuver around a tight space, allowing it to get in and out of places like factories. Equivalent vehicles cannot maneuver in such a tight space. There is a need for small vehicles in cities with narrow roads, for instance, old cities and historic sites.”
Çakmak pointed out that the vehicle they have produced is convenient for the collection of waste, especially in cities with narrow streets, saying that they cater to a market that expects good vehicles. He further noted that the electric utility vehicle's costs for businesses are very low.
Indicating that they are working on dealers and after-sales services, he stated that they have opened an office in Germany and introduced TRAGGER as EU countries are an export target for them.
Expressing that Turkey's leading engineers in the field of electric vehicles are crucial, Çakmak noted: “Young engineers should return to Turkey after getting experience abroad. The biggest capital in this country is the young population, and there is a need for them.”
Last Update: Dec 20, 2019 2:05 am
RELATED TOPICS