Davutoğlu: We will improve transport lines with Bulgaria 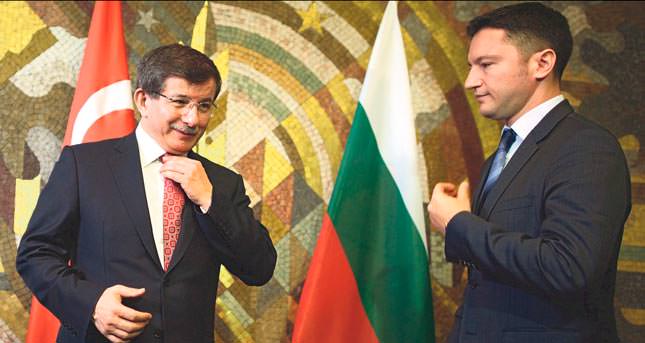 With the first day of his visit to Bulgaria winding down, Turkish Foreign Minister Ahmet Davutoğlu spoke with the press in Sophia after meeting with Bulgarian Foreign Minster Kristian Vigenin. Davutoğlu said that his frequent visits to Bulgaria are aimed at accelerating efforts to sow stronger relations between the two countries and emphasized that a joint commission meeting as well as border commission meeting, involving Bulgaria's and Turkey's interior ministers, would convene soon.

Regarding a planned upgrade in transport lines between Turkey and Bulgaria, including freight, airlines and railroads, the Turkish Foreign Minister said, "We discussed with the Bulgarian President Rosen Plevneliev and other authorities the launch of Marmaray and a high-speed train to run right here."

Davutoğlu stressed that both sides are intending to increase the volume of trade to 5 billion euros from 3 million euros and said that a 2 billion-euro increase of investments in Bulgaria depended on further liberalization of the Bulgarian economy and broader cooperation opportunities.

He also stated that Thursday's meetings also touched on issues considered to be "problematic" in the meetings and expressed his concern over problems which Turks living in Bulgaria have faced. "On the issue of the attack on the mosque in Plovdiv (Muradiye Mosque), the attempt to change Turkish names of 123 residential areas by the Varna Municipality's initiatives, issues of teaching Turkish and other matters, we called a spade a spade. All Bulgarian authorities including the president condemn the attack on the Muradiye Mosque. Plevneliev participated in an iftar meal with the deputy prime minister last year. We are looking [at this from] the same perspective," the foreign minister said.

Davutoğlu also emphasized that he supported the struggle of Muslim Denomination, a religious organization which represents Muslims in Bulgaria, concerning the return of the foundations' properties. "We returned $1 billion worth of property and precious places to the Bulgarian foundation [in Turkey]," said Davutoğlu, adding that it was "normal" to return the related properties in Bulgaria to the Islam Foundation. "When returning (the property), it is not something that can be taken to Turkey. These properties are in Bulgaria."

Regarding the ongoing case to return the foundation's property, Davutoğlu said: "We hope that they will make a decision in harmony with human rights. The decision does not change with the oppression of marginal groups. However, I saw that the Muslim Denomination is undeterred. If [they are not successful] in Bulgaria, the Grand Mufti of Bulgaria (Mustafa Aliş Hacı) said that they would take every type of legal action, including going to the European Court of Human Rights and I replied, 'It is your incontestable right.'" Davutoğlu also commented on the issue of Bulgaria's new electoral law, which suspends "foreign" languages including Turkish. "Turkish is the language that belongs to here, the language of your citizens. Turkish is not a foreign language. I also gave an example.

There were also bans on Kurdish in Turkey, but making propaganda in Kurdish was allowed and that never caused any harm. It is being so easily implemented in Turkey. It did not cause any loss. The citizens' awareness of belonging was strengthened."

Meanwhile, Turkish Foreign Minister Ahmet Davutoğlu is expected to visit Ukraine within a few days. Diplomatic sources noted that any news in Ukraine is being followed almost simultaneously, "We are closely pursuing any news. We are observing the process in Ukraine at close range."