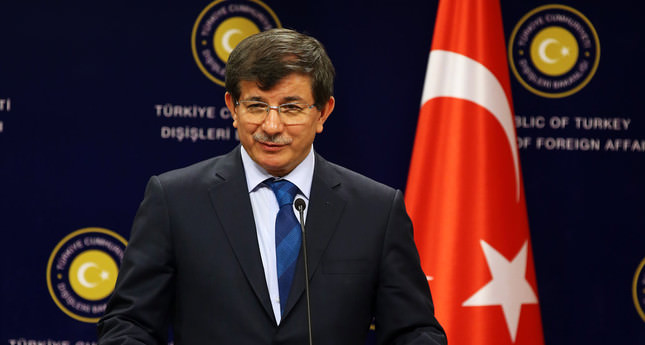 Minister of Foreign Affairs Ahmet Davutoğlu said yesterday he found the decision by the pro-Russian regional Crimean parliament's to hold a referendum in order to secede from Ukraine and join Russia worrisome. "Any disputes about territorial integrity would cause huge instability in the Black Sea basin and the larger Eurasia region," warned the minister.

Davutoğlu made the statement about the Ukraine and Crimea crisis in a joint press conference yesterday in Ankara with Raşid Meredow, Turkmenistan's minister of foreign affairs who was visiting Turkey at the time

"A participatory political structure is important for the formation of a participatory government. Externalization of any groups will lead to unrest. Turkey's attitude in this matter is quite clear: Crimea should be an ethnically peaceful peninsula, while preserving its autonomy as part of Ukraine. This is our target and vision. Within this framework, we are worried about the decision to conduct an early referendum taken by the parliament of the Crimea Autonomous Republic," said Davutoğlu.

The minister described Ukraine and Russia as "two important and strategic partners and two friendly countries for Turkey." He noted that Turkey would do its part to alleviate the tension.

Davutoğlu stressed that the future of Crimean Tatars has the utmost priority for Turkey. He indicated that they are always in touch and added that the Turkish consulate general left Odessa and went to Crimea to meet Tatars and Crimean authorities. He also noted that a council from Ankara would go to the region.

He also conducted multilateral diplomacy in Rome on Thursday concerning the Ukraine crisis. He commented on the decision of the Crimean parliament to join Russia: "It is a prematurely made decision that will not serve stability."

He was in Rome to participate in the second International Ministerial Conference organized to support Libya. He met his American colleague John Kerry and Russian counterpart Sergey Lavrov, after which he responded to questions by Turkish journalists.

Davutoğlu was asked about the attitude of Turkey towards the recent incidents in Ukraine. "We have adopted a principled attitude about Ukraine since the very beginning.

Ukraine's territorial integrity and political unity is crucial to us. We also highlighted this in the meeting of our Prime Minister Recep Tayyip Erdoğan with Vladimir Putin. I expressed our opinion to Lavrov once more today. My contacts in Kiev are also in this direction. Certainly, formation of a political structure and government in Kiev to represent all factions of Ukraine has the utmost importance," said Davutoğlu.

The minister stated that they know of the close contact of Russia with the people of Ukraine and the historical bonds between them. He added that Turkey also has historical bonds, and they closely monitor the incidents as a neighbor of both Russia and Ukraine.

Davutoğlu indicated that Crimea should become a peaceful peninsula as part of Ukraine in the Black Sea. "Russian, Ukrainian and Tatar communities should live in peace and set a good example in the region. Thus, we suggested to all parties we met with to refrain from any fait accompli and respect the basic principles of international law and territorial integrity in Crimea and Ukraine."

During his meeting with Turkish journalists in Rome, Davutoğlu discussed the Crimean parliament's decision to join Russia. "To make a decision in a very short time would influence not only Crimea but also Ukraine. These kinds of decisions should be refrained from. Diplomacy should be given a chance. I believe that these troubles can be solved through diplomacy. As I stressed in the meeting with Mr. Lavrov and Mr. Kerry, there are two main principles here. First is the territorial integrity of Ukraine and the second is the formation of an inclusive government that embraces everyone in Kiev and that does not externalize the eastern and southern Ukraine. This government should lead the country to an election as soon as possible. A solution can be created within this framework. We hope Ukraine will not be a land where different interests conflict; rather, we wish it to be where visions come together. Thus, Crimea would benefit from that common vision," said Davutoğlu.

When it was pointed out that U.S. naval ships had set out for the Black Sea, the minister said, "The principles of the Montreux Convention are clear about ships that may go through the straits." He continued: "We observe the Montreux principles. Everyone witnessed this in the Georgia war. We have always been respectful of international law. Especially when the straits and the sovereignty of Turkey are at stake, we never make concessions. We apply the conventions we are part of and act in accordance with these conventions."

In response to a question about the recent intelligence flights of Russia in the Black Sea parallel to the Turkish coast, Davutoğlu said, "Turkish Armed Forces and Air Forces take measures when necessary, and this is not against any country."

Noting that the Black Sea has long been a sea of peace and stability, the minister stated: "Within this context, I think that all countries on the coasts of the Black Sea should - and already do - pay attention to that point. Some flights are usual as part of normal military practice. These should stay within the boundaries of respect for mutual borders and sovereignty areas. We do not foresee any crisis for the time being.

There is not any extraordinary situation in the Black Sea. We are making efforts in this direction. Turkey does not ever wish any conflicts either between Ukraine and Russia nor between NATO and Russia and
among any combination of countries."