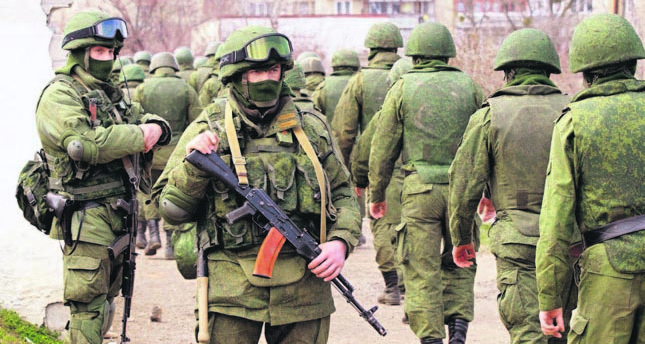 Crimea will hold referendum under Russian occupation on March 16, what will be a historic day for the region. Unmarked but widely believed to be Russian troops moved in three weeks ago after former president removed

ISTANBUL – After the Russian military intervention in Crimea, new pro-Russian Crimean authorities decided to hold the referendum on the status of Ukraine's autonomous republic.

The referendum will be held on March 16. A Crimean Tatar leader says the vote was called "under the barrels of pointed guns."

As Russian troops increase their presence in Crimea, bearded men in camouflage uniforms and black fur hats, armed with knives were checking traffic on Thursday along the busy road linking Crimea's regional capital of Simferopol and the naval port of Sevastopol.
A black flag with a skull, the standard of Serbian nationalists, and a Serbian national flag fluttered in the wind alongside the Russian tricolor, bringing back images of the turbulent events of the 1990s in the Balkans.

Russia is Serbia's traditional ally, as the two nations share the same Slav origins, Orthodox Christian faith and similar languages. Serbia is also heavily dependent on Russia's energy, and the cash-strapped government in Belgrade has turned to the Kremlin to underpin its budget.

World leaders also argue that Russia should withdraw its troops from Crimea.

Ahead of the referendum, U.S. Secretary of State John Kerry met with his Russian counterpart Sergei Lavrov in London, hoping to ease the situation in Crimea. Prior to the upcoming Crimean referendum, the meeting between the two ministers is considered the most important final step.

Lavrov says the crisis in Ukraine's Crimea region has left both the United States and Russia in a difficult position. "This is a difficult situation we are in, many events have happened, and a lot of time has been lost, so now we have to see what can be done," Lavrov told reporters at the U.S. ambassador's residence in London before the start of a meeting with his counterpart, Kerry.

Kerry hoped that the two diplomats would find ways to "move forward together and to resolve some of the differences between us."

There will be two questions on the referendum ballots, and the voters will decide whether to join Russia or restore the current constitution.

The expected participation rate is low.

On condition that more than 50 percent of the voters are in favor of joining Russia, the Russian Assembly, Duma, will come together on March 21 and take the resolution that Crimea has joined the Russian territories.

Timur Berk, the Turkish editor of the Crimean New Agency, says: "The Turkish Tatars and Ukrainians do not want to live in Russia under Putin's government. The people also do not want to live in a country without freedom of expression and where television networks are used as a means of propaganda. In the 1800s, a French writer described Russia as 'the prison of nations.' There is a worrying fear of Russia because of the previous examples observed in Tatarstan and the Chechen Republic. Turkish Tatars are afraid of joining Russia."
Turkish journalist Timuçin Mercanoğlu stated that the expected participation rate is low. Mercanoğlu continued as follows: "The Crimean Tatar National Assembly has declared its intention to boycott the referendum because of its illegitimacy. Composing 13 percent of Crimea's population, Tatars will not vote in Sunday's referendum.

Further, nearly all Ukrainians will not participate; 24 percent of Crimea's population comes from Ukraine. Russia's occupation also drew the attention of democratic Russians.

They criticize Russia for its indifference to democratic Russians in Crimea.

They do not want to go to the poll, either.

When looking at the present figures, there are 13 percent Tatars, 24 percent Ukrainians and 20 percent democratic Russians.

The most optimistic signs indicate that the participation rate will be 50 percent or below.

There will be two questions on the Crimean referendum ballots:

1- Are you in favor of Crimea becoming a constituent territory of the Russian Federation?

2- Are you in favor of restoring Crimea's 1992 constitution?

The results of the referendum will be released on March 17.