More than 8000 still missing in Bosnia 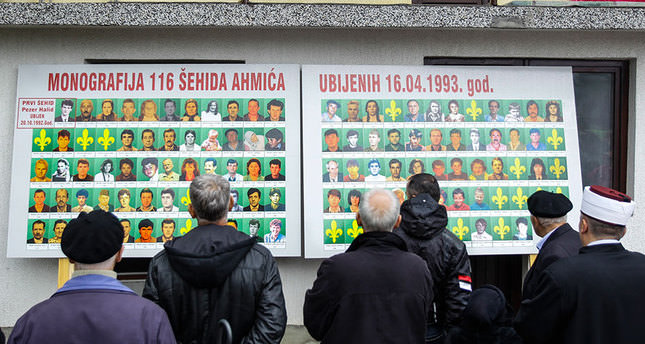 by AA
Apr 17, 2014 12:00 am
SARAJEVO, Bosnia and Herzegovina — The silence descended on the village of Ahmici in central Bosnia on Wednesday which marked the 21st anniversary of the massacre of 116 Bosniak civilians which was perpetrated by members of the Croatian Defense Council on April 16 1993.

The massacre in Ahmici, where Bosnian Croats turned against Bosnian Muslims, has been defined as the single most savage example of ethnic cleansing in the Balkans. One year before, Bosniak Croats and Muslims fought together against Serb army and military forces. The massacre is honored every year by families of the victims in Ahmici on 16 April.

During the past 20 years, 86 people out of 116 killed were found and identified while 30 still remain missing, according to Elvedin Kermo, President of the "April 16 - Ahmici" association.

Kermo said that each passing anniversary is still heart-breaking, as hundreds of family members gather at the local cemetery to lay flowers on the graves and honor the victims. These families cannot take any comfort that the perpetrators of the crime have been brought to justice.

"As the direct perpetrators of the crimes in Ahmici court were prosecuted, only two - Drago Josipovic, who is already on the loose and Miroslav Cicko Bralo were sentenced to 20 years in prison. They were convicted for the death of three people. Who killed the other 113 people?" asks Kermo.

Members of the Croatian Defense Council (CDC) at dawn on April 16 1993 committed war crimes against civilians in this village killing 11 minors, 32 women and 73 men. The youngest victim was a three-month-old baby and the oldest, an 81-year-old woman.

International Criminal Tribunal of the Former Yugoslavia (ICTY) ruled that the murders in Ahmici were crimes against humanity.

Zivko Budimir, President of the Federation entity of Bosnia and Herzegovina was present in Ahmici at the ceremony marking the anniversary of the massacre.

Budimir commented that in Bosnia there are many who "are trying to stop the prosecution of those responsible for the war crimes."

"Unfortunately, it is often the case that all three nations are trying to portray these people as heroes. They are not heroes. They are people who committed a crime, who were in the service of evil, and need to appear before the court for what they have done," added Budimir.

Abdulah Ahmic (50) told the the Anadolu Agency that he came to honor his mother, three sisters, father and brother who were killed on April 16. He has also lost one more brother who was killed as a soldier on the front line.
"Of eight members of my family, I am the only one alive. I survived the shooting, the bullet went through my cheeks. I survived the concentration camp too," said Abdulah.

Recalling that fateful day, he said that shooting woke them up.

"It was a general attack. Houses were torched. Our house was surrounded very quickly. They broke into the house, took me and my father out of the house where my brother was already killed. One of the soldiers cocked his rifle and killed my father. He did not shoot at me precisely, the bullet passed lower, so I remained lying, I pretended that I was dead," he said.

Huso Ahmic lost his parents that day. Showing the house in which the murder happened he said:

"United Nations Protection Force took nine corpses out of this house. Seven neighbors came here to hide before that. There were all killed, including a woman with three daughters," said Huso.

In 1992, in the northwestern Bosnian town of Prijedor and the surrounding area, the Serbian army and military forces committed mass killings of inhabitants and detained Bosnian Croats and Muslims together in notorious concentration camps Omarska, Keraterm and Trnopolje.

In September 2013, the extent of the mass killings at the camps are still coming to light since the mass graves in Tomascia were discovered by former member of the Army of Republika Srpska. These graves are now considered to be the biggest in Europe after the second world war. It is assumed that it hides the bodies of nearly 1000 missing civilians who were detained in the camps.

During the past seven months, nearly 500 bodies were found whose identification is currently ongoing and based on DNA analysis, 49 victims have been identified so far.

The Anadolu Agency team on Wednesday visited the Sejkovaca Center for Autopsy and Identification in the town of Sanski. Most are families who come to see the bones of their loved ones who have been identified.

The wife of victim Said Visic told the AA about her fate: "I was with my husband in the back yard in July 20 1992, when our neighbors came, took him out on the road and killed him," said Ismeta Visic.

"Today I am here with my son who was three-years-old when his father was killed. He came to see his bones. Bones do not speak, but it's time to witness, speak and acknowledge what happened," she added.

"This is a difficult day for me. But I have to stand it," said Abaz Hergic who came to see the bones of his two sons who were 23 and 24 when they were killed."

"This is so difficult but also a relief for me because I will bury them finally," said Asim Hupovac, also father of two sons Jasin and Husein.

According to the information in the Center, most of the victims were killed with a bullet in the nape of the neck.

The bodies were hidden below artificial embankments under several meters of soil.

Lejla Cengic, a spokeswoman for the Institute for Missing Persons in Bosnia and Herzegovina also found and identified bodies of her three uncles. Lejla hopes to identify one more uncle.
"They were killed in front of their houses, and then they were moved. After 22 years, their bodies were found in the Tomasica mass grave. Based on DNA analysis, three were identified and we are awaiting the confirmation of the DNA analysis for the fourth uncle," said Lejla.

She added it is difficult to be 'on the other side' when you need to inform your family. The bodies of Lejla's relatives were found during the excavations which are ongoing since Tomasica was discovered. This week families are coming to the Center for the autopsy to identify them officially. Lejla is among them.

"It is difficult now as it was in the moment when they were killed. Exhumation and identification means facing the past. It is very painful and traumatic," Lejla concluded.

Identification of bodies found takes place in the Sejkovaca Center from April 16 to 23 and the exact number of those identified will be known after the end of this takes place.

In the area of northwestern Bosnia, since the end of the war, 131 mass graves have been found.

According to the IMP, 8,400 people still remain missing after the war.