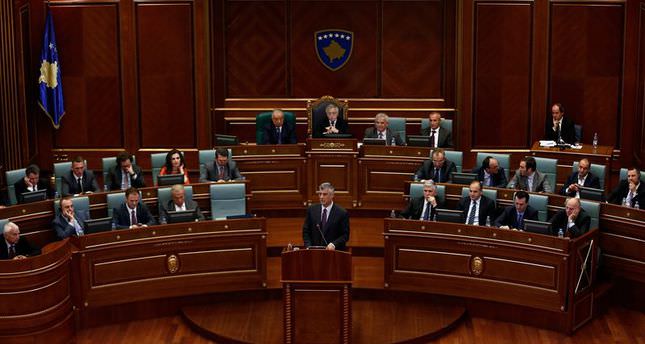 by AA May 08, 2014 12:00 am
PRISTINA — Kosovan members of parliament decided Wednesday to dissolve the assembly and sent the country into early elections after they failed to adopt a law to create a national army.

90 members of the 115 seat Parliament adopted the move to dissolve the assembly one day after the country's political leaders agreed to go to early elections during a meeting with President Atifete Jahjaga. Four members voted against while three abstained.

Kosovo's parliament was due to hold a vote to transform the Kosovo Security Forces into the 'Kosovo Armed Forces', but minority members of parliament, mainly ethnic Serbs, did not take part.

According to Kosovo's constitution, the armed forces law has to be adopted by two-thirds of lawmakers and two-thirds of the minority-community members.

Thaci, during a joint press conference with EU Enlargement Commissioner Stefan Fule in Pristina on Tuesday said that: "A parliament that cannot vote to create its own army is nonsense".

Kosovo has international support to form an army while Belgrade opposes the move.

The former Yugoslav province, which unilaterally declared independence from Serbia in 2008, is recognized by more than 100 states, including the U.S., Great Britain, France, Germany and Turkey.
Last Update: May 08, 2014 10:45 am
RELATED TOPICS