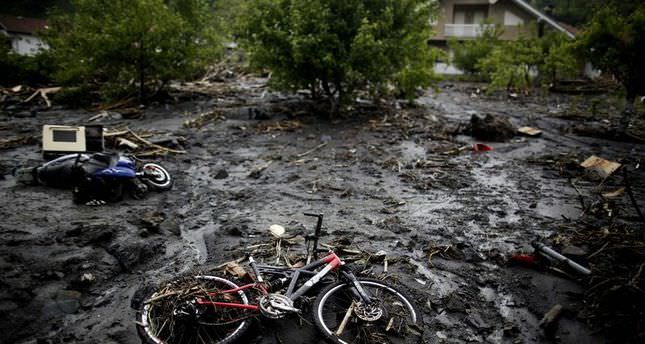 by May 19, 2014 12:00 am
MAGLAJ, Bosnia/KRUPANJ, Serbia — More than a quarter of Bosnia's four million people have been affected by the worst floods to hit the Balkans in more than a century, the government said on Monday, warning of "terrifying" destruction comparable to the country's 1992-95 war.

The floods extended across Serbia and Bosnia, where receding waters in some of the worst-hit areas are now revealing the extent of the devastation. Homes have been toppled or submerged in mud, trees felled and villages strewn with the rotting corpses of livestock.

"The consequences of the floods are terrifying," Bosnian Foreign Minister Zlatko Lagumdzija told a news conference. "The physical destruction is not less than the destruction caused by the war." He said more than 100,000 houses and other buildings were no longer usable. "During the war, many people lost everything," he said. "Today, again they have nothing."

More than a million people in Bosnia were been cut off from clean water supplies, Lagumdzija said, after torrential rains caused rivers to burst their banks and triggered more than 2,000 landslides.

The discovery of a body in northern Bosnia on Monday raised the regional death toll to at least 38, but the figure was likely to rise further.

Even as the crisis eased in some areas, a new flood wave from the swollen River Sava threatened others, notably Serbia's largest power plant, the Nikola Tesla complex, 30 km (18 miles) southwest of the capital, Belgrade.

In Bosnia, one official said as many as 500,000 people had been evacuated or left their homes, the kind of human displacement not seen since more than a million were driven out by ethnic cleansing in the Bosnian war two decades ago. At least 25,000 people have been evacuated in Serbia.

"We have some indications that a half a million Bosnians have either been evacuated or have left their homes because of flooding or landslides," said Fahrudin Solak, the acting head of the civil defense service in Bosnia's autonomous Federation.

Communities in both countries continued to stack sandbags and dig trenches to protect towns from flooding triggered by the heaviest rainfall in the Balkans since records began 120 years ago.