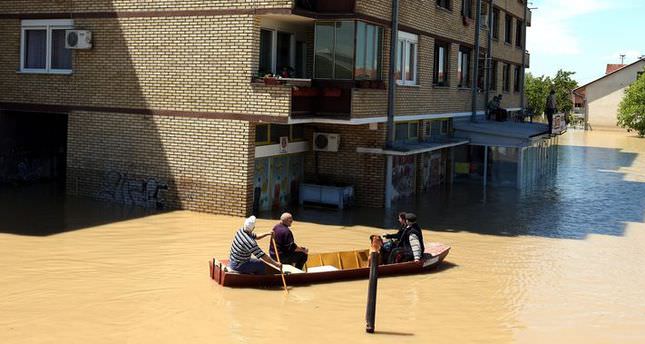 by AA May 20, 2014 12:00 am
SARAJEVO, Bosnia — Bosnia-Herzegovina has declared a day of mourning after the death toll from the Balkans flood disaster rose to 20.

Thousands of people still lack electricity and drinking water supplies across the region and government officials are working to try and prevent a possible spread of infectious diseases.

Neighboring Serbia has begun evacuating the town of Obrenovac near the capital, Belgrade, following an alarming rise in water levels on the Sava river which flows through the city.

At least 15 people have reportedly died in Serbia and nearly 300,000 others have been cut off from power and tap water.

All foreign aid currently flowing into Serbia is reportedly being channeled to the city of Sabac, which nestles alongside the Sava and where more than 800 people have been evacuated over the last four days.

The floods, which killed at least 35 people as they swept across the Balkans, are considered the worst ever in the region in 120 years.

Aid has poured in from around the world, with several Turkish agencies and organizations shipping truckloads of relief items.

The UN emergency relief coordinator Monday urged the international community to provide assistance after devastating flooding in the Balkans which has claimed at least 36 lives.