Mine explodes in Bosnia as flood clear-up begins 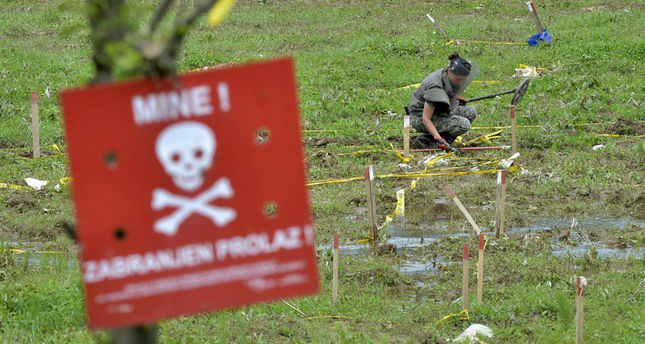 Deadly floods in Bosnia have devastated the countryside and some of the 120,000 landmines that were left from the Bosnian War in the 1990s have been dug up. One landmine in the Brcko district of northern Bosnia blew up yesterday but did not cause any casualties

BELGRADE — A landmine dislodged by devastating floods in the Balkans exploded in Bosnia, officials said yesterday, hurting no one but highlighting the dangers of a huge cleanup operation as governments began counting the costs.

The device, one of an estimated 120,000 mines left over from the 1990s Yugoslav wars, went off on late on Tuesday in the Brcko district of northern Bosnia, the national Mine Action Centre (MAC) said.

A fridge containing nine explosive devices was also found in a flooded garden, it said. Other dangerous finds included a rocket launcher and a large plastic bin full of bombs and ammunition, also thought to date from the 1992-95 war.

"Some mines are made of plastic and they float like plastic plates," said Fikret Smajis from the MAC. "But even those made of iron can be easily washed away."

Water from the worst floods in more than a century, which have killed 49 people and caused the evacuation of almost 150,000 people in Serbia, Bosnia and Croatia, was meanwhile receding in some areas.

But the situation remained tense in the Serbian capital Belgrade and in northeast Bosnia in the wake of days of torrential rain in southeast Europe last week that caused the river Sava and its tributaries to burst their banks.

"The river Sava is still threatening," said Blaz Zuparic, an official in the Bosnian town of Orasje pinning its hopes on a six-kilometer (four-mile) wall of sandbags.

"The damage is so huge that the region will take more than 10 years to recover," he said.

"Only God can help us to hold on."

In Belgrade, where the Sava flows into the Danube, volunteers have been working around the clock to erect a wall of sandbags 12 kilometers (seven miles) long.

"We are expecting a peak this Wednesday, and again on Friday. If that passes we will be able to say that we have protected Belgrade," mayor Sinisa Mali said.

More than 1.6 million people in the region have been affected. In Bosnia, a quarter of the 3.8 million population is without safe drinking water.

Vast tracts of farmland are still under water, large areas are without power and many towns and villages remain deluged and difficult to access. The death toll may yet rise as more bodies are found. Authorities have warned of a risk of epidemics as drowned farm animals rot, and efforts by health experts and the army to recover the bloated carcasses have been hampered.
Last Update: May 22, 2014 5:32 am
RELATED TOPICS