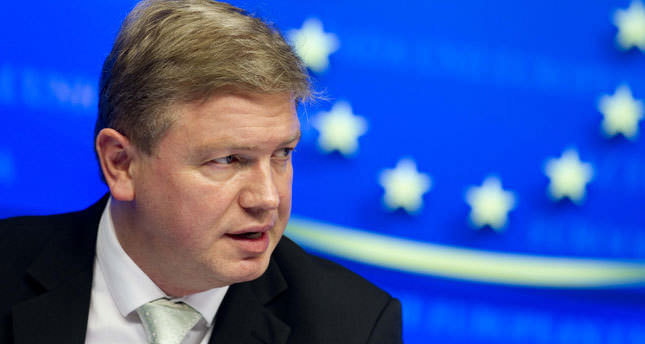 The 2014 Enlargement Package presented by Štefan Füle, the Commissioner for Enlargement and the European Neighborhood Policy, on Wednesday underscores that each western Balkan country was not able to make satisfactory progress in key areas related to the rule of law and fundamental rights compiled under Chapters 23 and 24. As a key priority condition for accession into the European Union, the rule of law is now at the heart of accession negotiations for each candidate country.

Increasing the relevance of the rule of law and fundamental rights in the EU has made Chapters 23 and 24 core issues as each country has to tackle many challenges in relation to judiciary and fundamental rights reforms. The elements under Chapter 23 "Judiciary and Fundamental Rights" are closely linked to the political criterion that needs to be met in order to start accession negotiations. Chapter 24 "Justice, Freedom and Security" includes the fight against organized crime, terrorism and corruption, border control and visa regulations covering migration and asylum. Considering these general principles and standards imposed by the EU, western Balkan countries wishing to join the EU; Albania, Kosovo, Serbia, Montenegro, the former Yugoslav Republic of Macedonia (FYROM), Bosnia- Herzegovina seems to have a long way to go in becoming a member of the European Union, as progress reports on each country indicates.

Albania's progress in reforming institutions to meet EU standards and general principles indicates that the country still faces challenges in its justice system and highly politicized parliament. In a number of legislative measures relevant to EU accession negotiations, mainly in the areas that fight against corruption and organized crime, Albania has showed significant progress over the last year, as the progress reports states that the country has "made further progress toward fulfilling the Copenhagen political criteria for membership in the EU." Yet, despite some progress, the EU urged Albania to form a sustainable political dialogue, thereby doing more to tackle challenges in the core issues. The country applied for membership in 2009 and got candidate status in 2014. The Stabilization and Association Agreement (SAA) was signed as the first step toward membership in June 2006.

The progress report shows little progress made so far to fight against corruption and organized crime. The political instability and ethnic divisions still lack a political dialogue which needs to be established between groups. "Bosnia and Herzegovina has not overcome the standstill in the European integration process," the report says. Considering the "regrettable situation" going on in the country, the EU urged Bosnia-Herzegovina to improve "the functioning of the political institutions at all levels of government. Due to the political environment surrounded by deadlocks and chaos, protests and the socio-economic needs of its citizens.

Considering the backward steps over the last year, the 2014 progress report indicates that the "accession process is at an impasse." It applied for full membership in 2014 and has been a candidate country since 2005. FYROM is the first country to sign the Stabilization and Association Agreement. Due to increasingly divisive political culture in the country, the EU's concerns over FYROM's achievements regarding the country's fundamental rights have been gradually increased over the last year. Despite some reforms in the judicial system, the country has long been suffering from serious challenges over the politicization in state institutions and governmental instability.

Montenegro has made significant gains since it adopted the action plan last year. After applying for membership in 2008, the country's accession talks started on June 29, 2012. Since then, ten negotiating chapters were opened, including Chapter 23 and 24 on the basis of Action Plans. Two negotiating chapters were provisionally closed. Despite some progress in core issues, the progress report stated, "Delays have been, however, noted on a number of measures, especially on legislative reforms. In other areas, legislative measures adopted have not yielded results in practice."

With regard to the new Serbian government's aspiration to join the EU, the progress report noted that the country "needs to continue to focus on the fundamentals first, in particular on the rule of law, including the full exercise of freedom of expression, public administration reform, together with economic governance." Serbia was granted candidate status at a Brussels summit in March 2012 and the accession negotiations were opened in January 2014. The normalization of relations with Kosovo through sustainable dialogue and building regional cooperation are seen as an important steps for Serbia to continue negotiations.

The progress report on Kosovo shows that the country has "demonstrated a good capacity to coordinate their European integration agenda, notably with regard to the Stabilization and Association Agreement (SAA) negotiations," which was initialed at the end of July 2014. The report also addresses "the necessary changes to key legislation" while urging Kosovo to "ensure a continued functioning of the courts and council, judges and members of the judicial council." After the 2008 declaration of independence, Kosovo has been on the European integration path. There has been a split over Kosovo independence among EU countries. Nevertheless, the EU considers Kosovo as a potential candidate for EU membership.