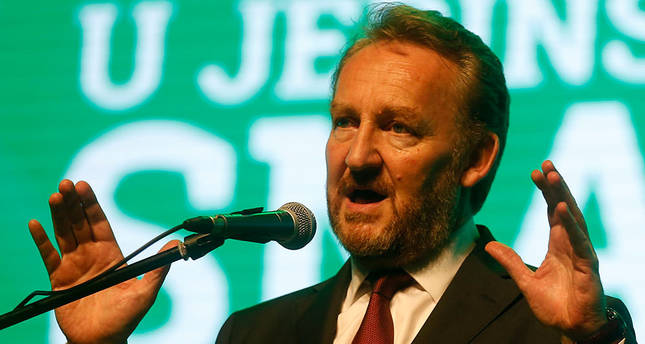 by AA Oct 13, 2014 12:00 am
Presidential candidate and deputy chairman of the conservative Party of Democratic Action, Bakir Izetbegovic, declared victory in the Bosnian presidential elections. Izetbegovic declared from his party's headquarters that, with 75 percent of votes counted, he is ahead in the race to become the Bosniak member of the tripartite Presidency of Bosnia and Herzegovina. Izetbegovic said that the elections were held in a fair and democratic atmosphere and that he was around 55,000 votes ahead of the next closest candidate. "I can declare my victory for the Bosniak membership of the tripartite Presidency of the Council," Izetbegovic announced. Izetbegovic also said that, having received 34 percent of the vote, his party will be the leading force at both national and state levels. He expressed his gratitude to voters and said that "they did a good job."

After the polls closed, members of the Party for Democratic Action began to gather outside their headquarters where they celebrated their candidate's re-election by burning torches. Meanwhile, Dragan Covic, the leader of the country's largest Croat party, the Croatian Democratic Union party, declared victory in the race to become the Croat member of the presidential council.

Bosnia and Herzegovina's seventh presidential and parliamentary elections since the end of the Bosnian War, which ended nearly 20 years ago, ended at 8:00 p.m. local time. Bosnia's 3,278,908 registered voters started to line up outside polling stations early in the morning to elect the three members of the tripartite Presidency of the Council. Voters went to the polls to elect one Bosniak and one Croat from the Federation of Bosnia and Herzegovina and one Serb from the Republika Srpska. Together, the elected members will serve one four-year term. The member with the most votes becomes the chairman, but the chairmanship rotates every eight months to ensure equality.

The president of the Bosnia and Herzegovina Central Election Commission, Styep Mikic, said that voter turnout for the presidential and parliamentary elections stood at 50.1 percent of registered voters. "A total number of 1,616,960 people out of a possible 3,278,000 voters went to the polls during the elections," Mikic said.