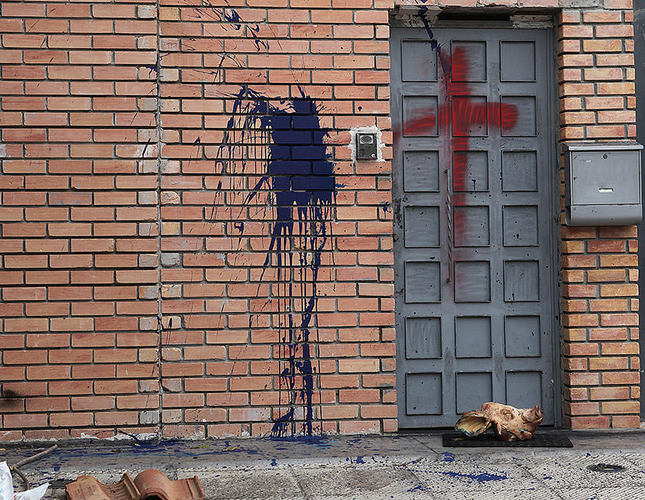 by Anadolu Agency Oct 17, 2014 12:00 am
Unknown attackers have placed a severed pig's head and painted swears and anti-Muslim slogans outside Greek-Arab Education and Culture Center of Greek capital Athens on early Friday.

Attackers also painted a cross over the entrance gate of the building, which serves as the largest masjid of Athens.

Greek police announced that none of the attackers were captured so far.

The attack was discovered by worshipers going to Friday prayers.

Bigotry targeting Jews and Muslims has increased in Greece in recent years, which also saw the meteoric rise of a Nazi-inspired far-right party. Golden Dawn entered Parliament in 2012, but all its lawmakers now face trial for running a criminal organization that used violence to spread and impose its beliefs.

Athens is the only European capital without a functioning mosque.

A mosque in Alexandropouli, known as Dedeağaç to Western Thracian Turkish minority of Eastern Greece, was also attacked with a pig's head in April 2014.
Last Update: Oct 19, 2014 2:51 pm
RELATED TOPICS