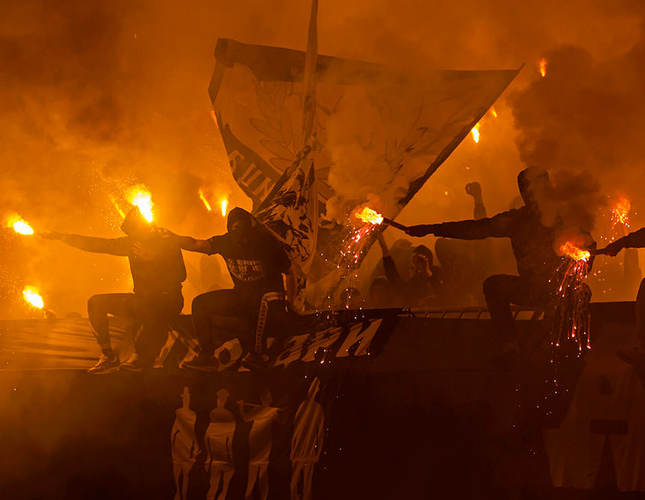 by Oct 19, 2014 12:00 am
Albania on Sunday condemned the burning of its flag during a football match in Serbia, the latest in a series of incidents aggravating political tensions between Belgrade and Tirana.

The Albanian foreign ministry urged Serbian authorities to bring the perpetrators to justice and called on "Serbian politicians to distance themselves from those acts that are... harmful for the future and stability of the Balkans."

The incident took place during the match between Serbian first division sides Partizan Belgrade and Red Star Belgrade on Saturday, when Red Star fans were photographed setting fire to an Albanian flag.

The incident further threw into doubt the forthcoming historic visit of Prime Minister Edi Rama to Belgrade, the first by an Albanian prime minister in 68 years.

Rama was due in Belgrade on Wednesday, but there were already questions over whether the visit would go ahead after the violent end of a Serbia-Albania football match on October 14.

The Euro 2016 qualifying tie in the Serbian capital had to be abandoned after a drone carried a pro-Albanian flag over the stadium, sparking a brawl on the pitch.

European football's governing body UEFA has opened a formal probe into both Serbia and Albania over the violence.

Rama said on Friday he had decided to travel to Belgrade, but his Serbian counterpart Aleksandar Vucic was still undecided whether to allow the visit.

Belgrade accused Rama's brother of controlling the drone from his seat in the stadium's executive box. But Olsi Rama, who later returned to Tirana with the Albanian team to a hero's welcome, denied the claims.

Following the incident, hooligans attacked several ethnic-Albanian owned shops in Serbia, notably in the northern town of Novi Sad. A Molotov cocktail was thrown into one bakery, while several others had their windows broken, local media reported.

Rama's visit was made possible by improved ties between Serbia and its former province of Kosovo, populated mostly by ethnic Albanians.

The 2013 deal between Belgrade and Pristina on normalization of ties was brokered by the European Union that the former foes, as well as Albania, hope to join.

Kosovo unilaterally declared independence in 2008 despite opposition from Belgrade.

Relations between Tirana and Belgrade have been sensitive over Kosovo and the ethnic Albanian minority in southern Serbia, which often demands more autonomy.

Turkey's Beşiktaş will play against Partizan in Belgrade on October 23, some Serbian newspapers and Partizan fans groups issued threats against Beşiktaş fans to not to come to Belgrade.