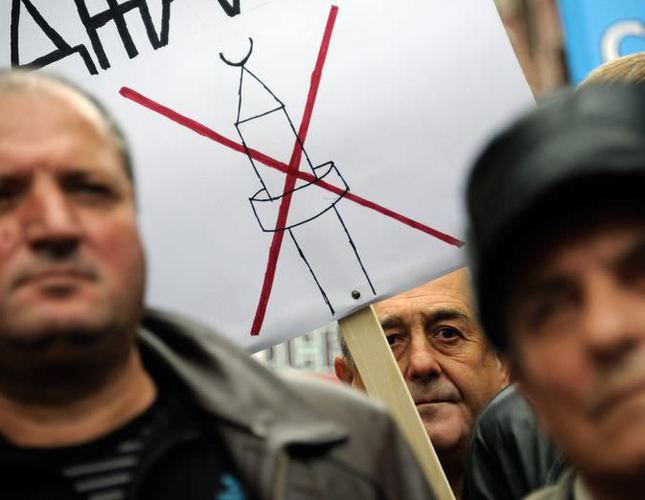 by AA
Nov 23, 2014 12:00 am
A demand by a Bulgarian nationalist party for a 10-minute Turkish-language news program to be withdrawn from Bulgarian state television has drawn criticism in the country.

The reaction came on Wednesday after the ultranationalist Patriotic Front, or PF, reiterated a call for the state-run BTN 1 Turkish-language news bulletin, which is broadcasted daily at 4.10 p.m. (1410GMT), to be removed from the airwaves, saying it was an affront to Bulgarians who were not of Turkish origin.

PF leader Valeri Simeonov told The Anadolu Agency: "To us, only the Bulgarian language can be broadcast on television as the country's constitution defines it as the official language.

He claimed those who did not speak Turkish felt irritated by the bulletin which threatened to "divide the nation" and had led to some people developing negative attitudes towards Turkish-speaking citizens.

"We are calling for the removal of the broadcast to eliminate the problem and are seeking support from other parties for our proposal," he said, adding that his party was demanding the bulletin's removal in return for supporting the coalition government.
But the PF's demand drew criticism across the European Union-member country - where more than 10 percent of the population speaks Turkish - which is struggling with high unemployment, economic instability, a banking crisis, high energy prices and xenophobia.

The Movement for Rights and Freedoms party, which first established the news bulletin 14 years ago and is comprised mostly of people of Turkish origin, said the Turkish-language news output was an indispensable right for Turks.

Party lawmaker Çetin Kazak said: "Our attitude is clear and this bulletin is a basic need of the minorities in Bulgaria."

He said the bulletin was a right which had been achieved under the country's Framework Convention for the Protection of National Minorities.

"The Bulgarian laws also back these acquired rights," he said, adding the program should be extended in length and made more inclusive.

Bulgaria's Minister of Education and Science, Todor Tanev, accused the PF of harboring an "inferiority complex" and said the party's call could harm the country's development.

He said: "It shows an inferiority complex and is not a good foundation on which to build the future.

"We are not a nation standing side-by-side, but a nation living in unity and we know how to do that."

He continued: "I want to see a peaceful world and this is only possible when we remove the political barriers and open the doors of our joint cultures and future.

"We use many Turkish phrases in the Bulgarian language which are hardly translated into English, but easily understood by us. God protect Turkish nationals."

Meanwhile, Culture Minister Vezhdi Rashidov, who is of Turkish descent, told Bulgaria's state-run National Radio that there was no need to re-broadcast the program in another language, but he did not give a clear reaction to the demand for its removal, which disappointed many citizens of Turkish origin.

Mariya Stoyanova, a member of the Council for Electronic Media (CEM), described the calls for the program's removal as "an old song" that was continuously being repeated by some politicians.
Stoyanova said the format of the program should have been the subject of discussion, adding: "This issue should not be discussed by politicians, but by professional experts like us."

She said the content, prepared by the Bulgarian news office, was presented via an automated Turkish translation system but ran contrary to its news mission.

"Turkish society is not represented in BNT 1's news output and the journalists working on the Turkish news desk should be integrated into the general news office so they can take a more active role in news production," she added.

Stonyanova said neither Bulgarians nor Turks wanted the controversy.

"We can lower the tension and discuss the issue in a civilized way. The issue of Turkish news should not divide our nation," she said.
Bulgaria's nationalist Ataka (Attack) party, which is losing popularity amid controversial policies, has proposed a draft law which includes a ban on Turkish news after managing to enter the parliament with a narrow vote in the last election.

Korman Ismailov, the leader of People's Party of Freedom and Honor - the right-wing partner of the coalition government Reformist Bloc - said the PF's proposal was not clearly explained and said they would oppose it.

The withdrawal demand also received reactions from Turkey, which received thousands of refugees of Turkish origin from Bulgaria due to the oppressive policies of communist Jivkov regime in the late 1980's. Balkan Turks' Association Chairman Bayram Çolakoğlu criticized the fact that such a demand can still be made in a European Union member country, and gave the example of Turkish state broadcaster TRT, was operates a channel which broadcasts solely in Kurdish.

Although the country's laws allow minorities to broadcast in their languages in Bulgaria, which became a member of the European Union in 2007, there are no news broadcasts apart from Bulgarian and Turkish.

Bulgaria has held two early parliamentary elections over the past one-and-a-half years amid protests over economic instability, a high cost of living, poverty and poor governance.

The support of at least 121 lawmakers out of 240 is needed for it to remain in office.

The ultranationalist PF's 19 lawmakers play a key role in the coalition, which has 118 members of parliament.

Political observers say the Reformist Bloc, which has been dogged by internal problems, could collapse, giving the PF greater prominence in the eyes of the coalition government.