Bodies exhumed from mass grave in Bosnia and Herzegovina 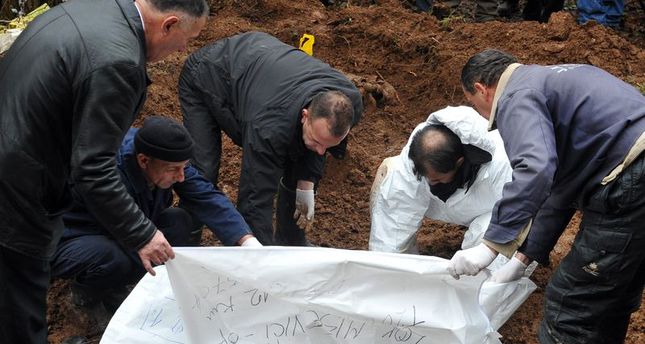 by AA Dec 13, 2014 12:00 am
The search for more bodies at what is believed to be a new mass grave site in Bosnia and Herzegovina was called off on Saturday.

The excavation at the latest site lies in the Hadzici near the Bosnian capital of Sarajevo, where five bodies were unearthed on Dec. 9.

Hadzici Association of Missing Families Secretary Farida Nisic said in a statement that bodies found at the mass grave were fully clothed and wrapped in blankets.

Out of the five bodies recovered, two bodies were remains of women and three were of men. The bodies were then transported to a memorial service center in Visoko city for identification.

"The excavation has ended, but according to our list, three more people are missing and we believe that they are in this region," she said.

Around 250 people are listed as missing in the municipality of Hadzici.

"We found most of the victims, but 90 are still missing. The victims' relatives are still trying to find the remains of their loved ones by using all opportunities they can."

Nisic recalled her own harrowing experience of discovering her dead relatives at a similar mass grave site.

"Once, I got a phone call from an unknown man, who said he wanted to meet to tell me a location of a mass grave, where 10 of my own relatives, including my brother were found buried," she said.

"I think, he was the man who killed them. We gave him money in exchange for the information," Nisic said.