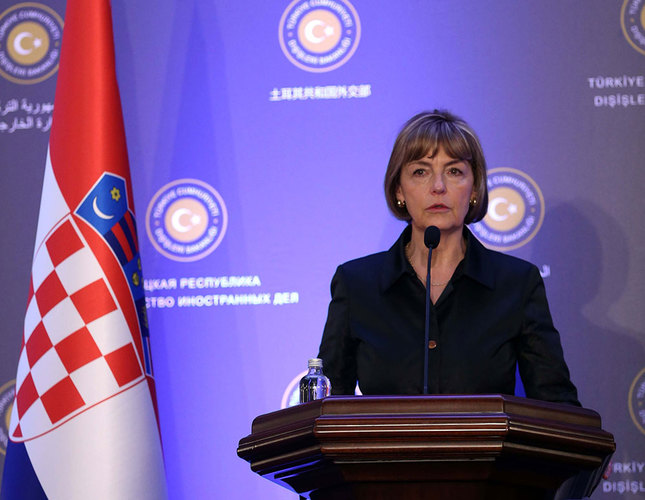 Croatian Foreign Minister Vesna Pusic said that the prosecution of suspected war criminals suspects in Serbia, commanders of the Yugoslav People’s Army, is a benchmark test for EU membership

Croatia may block Serbia's accession process with the European Union if Belgrade would not prosecute those accused of war crimes during the breakup of Yugoslavia, Croatian foreign minister Vesna Pusic told Anadolu Agency. "Croatia will apply, only and exclusively, the absolute same criteria to Serbia that were applied to Croatia while joining the European Union," Pusic said, who is also the country's EU affairs minister and the first deputy prime minister, and added, "Nothing more, but also nothing less."

Croatia wants Belgrade to persecute the Yugoslav People's Army commanders and political leaders accused of war crimes during the war in the 1990s. During the breakup of Yugoslavia between 1991 and 1995, the Serbian-controlled Yugoslav Army fought a war against Croatia's independence. A large number of former Serbian commanders and leaders have been imprisoned or are currently standing trial in the Hague for war crimes, but 19 years after the bloody conflict come to an end, many others who were accused are still free. Pusic said that prosecuting those accused for war crimes was part of the EU-mandated requirements for Croatia and also for Bosnia and Herzegovina, even in the earlier stages. "Prosecuting war crimes was specifically something that was a benchmark for us [Croatia] in chapters 23 and 24," Pusic said, referring to the policy areas Zagreb negotiated with the EU in order to become a member. She also said that Croatia required from Serbia to do the same.

Pusic said that Serbian-Croatian relations are good, but they are now influenced by the temporary release of the "indicted war criminal [Vojislav] Seselj," a Serbian politician who was released in November by the International Criminal Tribunal for the former Yugoslavia in the Hague after more than a decade of court proceedings for war crimes. He was released on humanitarian grounds to have treatment after being diagnosed with cancer last year. "Nobody in Croatia thinks that it was Serbia's responsibility because it was not Serbia who released him. However, after he was released, he started with his warmongering and hate speech towards both Croatia and Bosnia and Herzegovina," she said.

On the day that Croatians commemorated the fall of the town of Vukovar to Serbian forces in 1991, Seselj sent a press release to the Croatian media that was titled "The day of Vukovar's liberation." He also said that he still supports the ideology of "Greater Serbia," which means territorial aspirations at the expense of Bosnia, Croatia and Kosovo. "It would have been enough to hear just one sentence from the Serbian government saying that the Serbian government distances itself from and finds everything that this person is saying completely unacceptable, especially regarding territorial and other aspirations of our country," Pusic said. The expected statement from Serbia has yet to come, however. "And this is the reason why [the Croatian] prime minister cancelled his visit to the 16+1 summit with the Chinese in Belgrade," Pusic added.

Prime ministers from Central and Eastern European countries held a summit with the Chinese premier in Belgrade last week. The Croatian government decided that Pusic, not Prime Minister Zoran Milanovic, should head the Croatian delegation at the summit. The new president of the European Commission, Jean-Claude Juncker, has said that no further EU enlargement will take place over the next five years, but ongoing negotiations will continue. "The EU needs to take a break from enlargement so that we can consolidate what has been achieved among the 28," Juncker said. In response, Pusic emphasized, "Some countries took [this] to be a negative massage, but in my opinion, it is a simple statement of a fact. It is simply not technically feasible for any country, in the life of this commission, to complete the process of negotiations in the coming five years."

Pusic said that Turkey should be treated as a separate case from Balkan countries aspiring to join the EU "for the simple reason that there is a huge difference in size." Pusic said that while EU integration makes a big difference for Balkan countries, including Croatia, it does not make such a big difference for the EU itself. "On the other hand, when a country the size of Turkey joins, it does influence the nature and the character of the European Union. So, this is a huge step, not only for Turkey, but also for the EU," she said, adding that Croatia supports the EU enlargement policy "as this will be a positive step for both sides."

Balkan countries are small in terms of population and economic potential compared to Turkey. All Western Balkan countries, including Serbia, Montenegro, Macedonia, Bosnia and Herzegovina, Albania and Kosovo, seek to become part of the Union. The smallest of these is Montenegro with an estimated population of around 700,000, and the biggest is Serbia with over 7 million. Turkey, on the other hand, has a population of over 76 million and begun the negotiations to join the EU in 2005, the year when Croatia started its own; yet, Ankara's talks still continue.