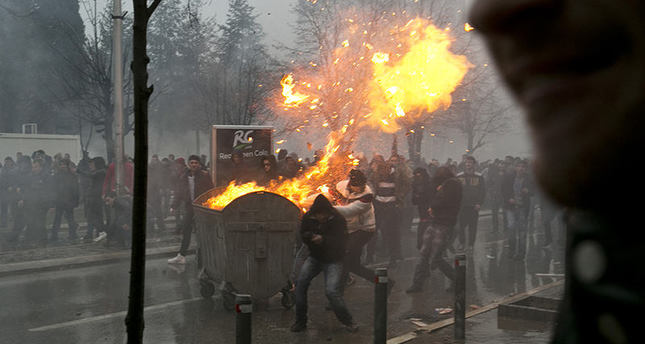 by Jan 27, 2015 12:00 am
At least 37 people, including 22 police officers, were injured on Tuesday, when Kosovo police clashed with thousands of violent protesters demanding the dismissal of a Serb minister accused of insulting the ethnic-Albanian majority.

Police fired tear gas and deployed a water cannon in scuffles with protesters after a few thousand supporters of the nationalist Self-Determination opposition party tried to break into the government building in the centre of the capital Pristina.

Demonstrators threw stones against a cordon of at least a hundred riot police, before reinforcements arrived.

Ambulances were seen driving away people who had been injured. Two police officers suffered serious injuries, according to a police statement.
Police said there had been 27 arrests so far. Pristina mayor Shpend Ahmeti, who took part in the protest as a member of Self-Determination party, was briefly detained.

Crowds chanted "Jablanovic out" and "Down with the government".

It was the latest in a series of protests in the last two weeks calling for the sacking of Labour and Social Welfare Minister Aleksandar Jablanovic, one of three Serb ministers in Prime Minister Isa Mustafa's cabinet.

Jablanovic sparked outrage two weeks ago when he called a group of ethnic Albanians "savages" for trying to prevent Serb pilgrims from visiting a monastery in western Kosovo on Orthodox Christmas. The group had claimed "war criminals" were among the pilgrims.

The minister later publicly apologised for his comments but angry crowds have continued to rally against him across the breakaway territory.
"We are continuing with protests and we will not stop until Jablanovic is dismissed from the government," the Self-Determination leader Albin Kurti told reporters.

Serbia and its former province fought a war in 1998-1999 which ended when a NATO air campaign ousted Belgrade-controlled troops from Kosovo.

Mustafa included three Serb ministers in his 21-member cabinet in a bid to improve relations with Kosovo's largest minority group, as well as with Serbia, which does not recognise the territory's independence.