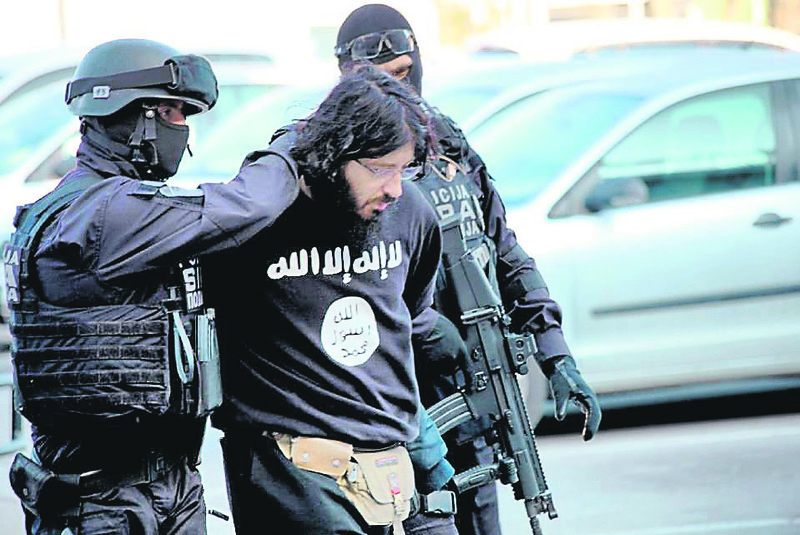 Bosnian police arrested dozens of militants linked to ISIS and al-Qaida.
by Yusuf Selman İnanç May 07, 2015 12:00 am

An Agence France Presse (AFP) report last week in reference to the increasing extremism in the country, such as the man who opened fire on a police station in a Bosnian town shouting "Allahu akbar" (God is great), killing one officer and wounding two others before being killed in a shootout, described the country as "[a] magnet for foreign militants during its 1990s war," and that "Bosnia is now grappling with the threat from home-grown extremists wooed by the conflicts in Iraq and Syria." The assailant, identified as 24-year-old Nerdin Ibric from a village near the northeastern town of Zvornik, was suspected of links to radical groups, and another man, said to have traveled to Syria, was arrested, AFP reported.

After the attack, Bosnian police were on alert and launched a major counterterrorism operation against suspected militants who are believed to have ties with extremist groups like al-Qaida or the Islamic State of Iraq and al-Sham (ISIS). "Police have been raiding locations throughout the Bosnian Serb part of the country on Wednesday, also confiscating weapons, ammunition and propaganda material aimed to encourage Bosnian citizens to join fighters in Syria," the Associated Press (AP) reported. "Some of the raided homes belong to people who are already fighting there, police said. They didn't give a number of how many people have been detained so far," the AP report said.

In January, a Bosnian imam, Selvedin Beganovic, was attacked in Trnovi by a long-bearded man who burst into the mosque's courtyard and pinned him down. According to residents, the attack was not random as the imam was telling people to stay away from the militant recruiters. Salafis were reportedly attacking him because he told people who come to the mosque that the war in Syria is not theirs, and that their war is to fight unemployment and poverty.

Dozens of Bosnians recruited by Salafi centers in Bosnia have reportedly joined the war in Syria, and some of them have returned to the country. Some 150 Bosnians are believed to have joined militant groups in Iraq and Syria, while some 50 others have already been and returned from the battlefield, according to the intelligence services, AFP reported.

The strict and ultra-conservative interpretation of the Quran and Islam, which is typical of Salafism and Wahhabism that is practically the official interpretation in Saudi Arabia, is not rooted in Bosnia's traditional practices of Islam. The majority of Bosnian Muslims are Sunnis of the Hanafi school, which is regarded as progressive and open since it gives an important role to "reason" in practicing religion. Sufism, which aims to show a way for Muslims to progress their spiritual abilities through love and tolerance to all, is ubiquitous in the country, and there are dozens of Sufi orders that embrace humanity. Under Ottoman rule, Bosnians lived with Sephardic Jews and Orthodox Christians in peace with few exceptions.

However, the war at the beginning of the 1990s changed the understanding of Islam for some in the country and paved the way for Salafi groups who came to Bosnia to wage "jihad" against the infidels with the support of some foreign governments – allegedly Saudi Arabia. It is estimated that a total of 2,000 fighters came to Bosnia. Some Bosnians who were motivated to destroy the enemy began the process of "Salafization" and radicalization. After the General Framework Agreement for Peace in Bosnia and Herzegovina, also known as the Dayton Agreement, which was signed in the winter of 1995, and after the Cold War had ended some radicals stayed in the country and obtained Bosnian passports. They started establishing their own mosques and foundations to recruit young people, which have led to a cultural change in society, as religion is much more present in everyday life. The clothing style of women has changed as Salafis see traditional clothing as wrong and incompatible with Islam.

"Salaf" as a word means "predecessor" or "ancestor," and as an Islamic term, means "those who lived either in the era of Prophet Mohammad or immediately after his death or in the third generation." Terminologically, those who say that the Quran and the sayings of the Prophet are the only ultimate valid sources of Islam and that to follow as-Salaf as-Saleh – the pious forefathers, i.e., the companions of the Prophet, are called Salafists. Salafist doctrine is basically anchored in two principles. First is "al-wala" which means "love, support, help or follow," in the sense that Muslims take the prophet and his companions as examples of how to live. Second is the term "al-bara," which means to purify Islam by excluding the "bidah" – innovation, novelty, heretical doctrine, heresy – and "khurafa" – superstition. The main ideas of Salafism generated the idea that the type of Islam in Bosnia, including Sufism, is full of mistakes and must be corrected, according to Salafists. Salafi groups claim on their webpages and YouTube videos that Bosnians have been dragged into an incorrect understanding of Islam and must be taught what "true" Islam is.

As Salafi groups are backed by powerful governments, the Bosnian government cannot prevent their activities, but passed a bill that makes it illegal to participate in or recruit others for war abroad.
Last Update: May 07, 2015 11:15 pm
RELATED TOPICS