Bosnia: Healing the lingering wounds of the Srebrenica massacre 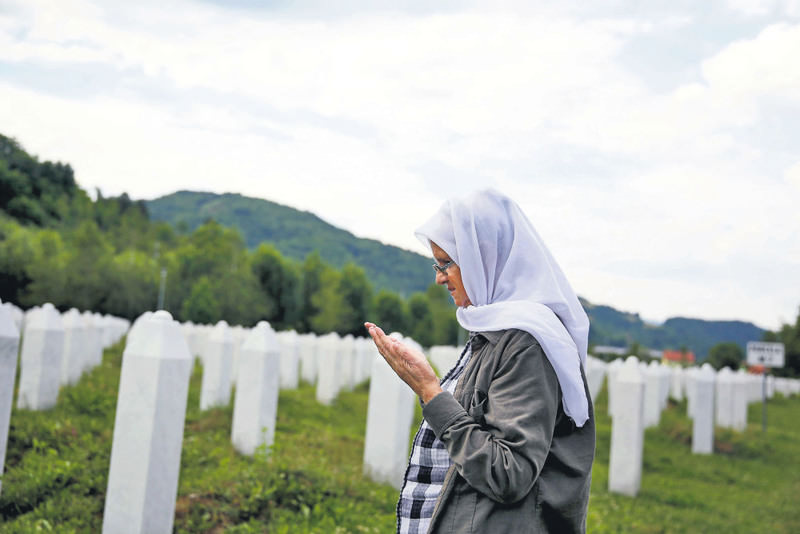 A woman reads prayers in a graveyard where unnamed victims were buried.
by Daily Sabah with Wires Jul 09, 2015 12:00 am

Twenty years after Europe's worst massacre since World War II in which some 8,000 Muslim men and boys were slaughtered by Serbian forces in 1995, Srebrenica still looks for ways to heal its wounds

Two decades after Europe's worst mass killing since World War II – which witnessed the slaughter of some 8,000 Muslim men and boys by Bosnian Serb forces from July 6-11, 1995, in Srebrenica – the town remains an open wound. Moreover, the lack of closure casts a dark shadow over Bosnia-Hercegovina, where many Serbs still dispute what happened.

Thousands have already begun a three-day march in Nezuk, a town in Bosnia-Herzegovina, to commemorate the 20th anniversary of the massacre and to pay tribute to the Srebrenica victims. Many have lined Sarajevo's main street as a huge truck bearing 136 coffins passed on its way to Srebrenica, where newly identified victims will be buried. As the truck covered with a huge Bosnian flag and with hundreds of flowers tucked into the canvas rolled down the street covered with white rose petals on Thursday, the sobbing of mothers, sisters and wives of the victims broke the silence. It stopped in front of Bosnia's presidential building where the weeping crowd tucked more flowers into the canvas. On Wednesday, survivors of the Srebrenica massacre set out with thousands of others on a solemn 105-kilometer march near the U.N.-protected enclave. Some marching at the front of the column carried wartime-era Bosnian flags and many wore white T-shirts that read "I survived." The marchers were walking in the opposite direction taken by the fleeing Muslims, who arrived in Nezuk after escaping Srebrenica. "It took me seven days to reach Nezuk. It was horrible … dead people and blood were everywhere. I saw my neighbors, friends and relatives, but they couldn't be helped," one participant, Nedzad Mujic, 46, told Agence France-Presse (AFP).

Efforts have been made to heal the wounds left by the 1995 massacre. In June, a mixed choir of Serb and Muslim children welcomed Pope Francis during a visit to Srebrenica aimed at bolstering the reconciliation efforts. But every July, as Srebrenica prepares to mark another year since some 8,000 Muslim men and boys were rounded up and shot dead by Bosnian Serb forces under General Ratko Mladic, any outward signs of progress become overshadowed by memories of the massacre. "We [the people of Srebrenica] become visible only in July," said the town's mayor Camil Durakovic, himself a Muslim.

Even now, the forests and farmland around Srebrenica are yielding bones; more than 1,000 victims are missing, tossed into pits then dug up months later and scattered in smaller graves by Bosnian Serb forces trying to conceal the crime. So far, the remains of more than 6,000 Srebrenica victims have been found, painstakingly identified and reburied. Although the massacre occurred two decades ago, Bosnian Serb and Serbian leaders have persistently refused to describe it as genocide as defined by international courts. On Wednesday, Russia vetoed a draft resolution recognizing the massacre as genocide at the U.N. Amnesty International slammed Russia over its Srebrenica veto, saying that the move is an "insult to the memory of the dead." The human rights group described Russia's act as "affront" to the families of the victims. "Russia's veto of a U.N. Security Council resolution on the Srebrenica genocide is an affront to the families of the victims of the massacre and will hinder attempts at reconciliation between the communities of Bosnia-Herzegovina," said John Dalhuisen, Amnesty International's Director for Europe and Central Asia. "This resolution was about much more than just recognizing Srebrenica as a genocide. It was also about acknowledging the urgent need to provide justice to the victims and long-term support to survivors, including of sexual violence, and clarifying the fate and whereabouts of the over 8,000 still missing from the war," Dalhuisen said.

For Muslim Bosniaks, Srebrenica has become a symbol of collective suffering. Serbs see it as a stick for the world to beat them with; many dispute the death toll and deny it was genocide, as the U.N. tribunal has ruled. Srebrenica was besieged by Serb forces between 1992 and 1995 during the Bosnian War. Back then, Serb militias were trying to wrest territory from Bosnian Muslims and Croats to form their own state. The U.N. Security Council had declared Srebrenica a "safe area" in the spring of 1993. However, Serb troops led by Mladic – who now faces genocide charges at The Hague – overran the U.N. zone despite the presence of around 450 Dutch soldiers tasked with protecting innocent civilians as U.N. peacekeepers. The Dutch troops failed to act as Serb forces occupied the area, killing about 2,000 men and boys on July 11 alone. Some 15,000 Srebrenica men fled into the surrounding mountains, but Serb troops hunted down and slaughtered 6,000 of them in the forests. A total of 6,166 victims have been buried at a memorial center; another 230 victims were laid to rest outside of the village of Potocari in July last year.
Last Update: Jul 09, 2015 8:08 pm
RELATED TOPICS