Migrants in the heart of Belgrade face trying conditions 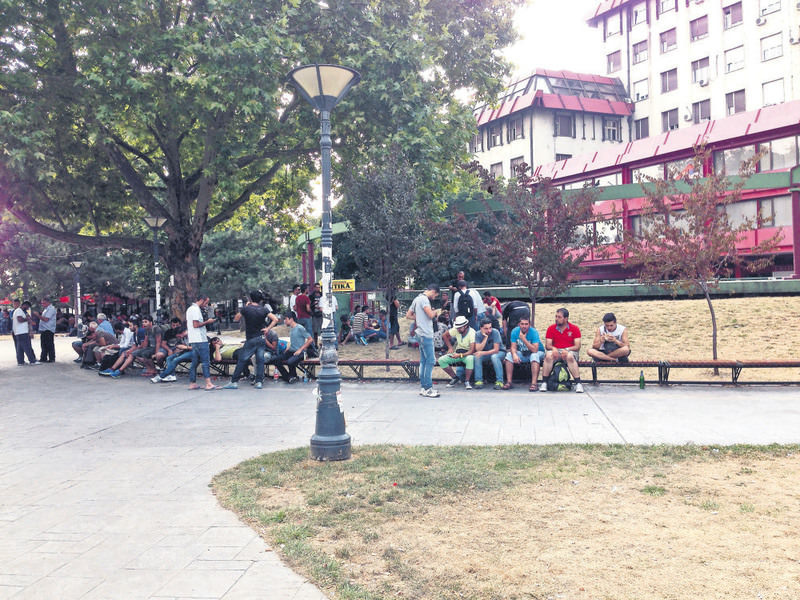 The Serbian capital Belgrade has thousands of migrants who have to spend weeks in terrible conditions in hope of reaching Western Europe, but Serbia is unable to deal with the growing problem

The five-year Syrian war, conflicts in Iraq and Afghanistan as well as the chaotic situation in several African countries continue to affect the whole region from Jordan to Turkey, from Libya to Iraq and even to the Balkans. Serbia is one of the Balkan countries that are compelled to deal with a growing migrant problem as thousands of citizens of war-torn countries flee to Serbia to find a gateway to Europe. Migrants who have been forced from their homelands due to varying reasons make a long trip to reach Serbia by hopping on human traffickers' vessels to cross the Mediterranean and Aegean seas, walking for hundreds of kilometers and, if lucky, traveling by buses. The migrants generally spend as many as three months trying to reach Belgrade from Afghanistan, Iraq or Syria. Men, women, children, youths and old people are subjected to the same conditions to survive as their homelands are either plagued with violence or have become battlefields. Afghan asylum seekers flee Taliban extortion and arbitrary killings while Iraqis say their towns have become uninhabitable due to the Islamic State of Iraq and al-Sham (ISIS). Syrians also suffer from ISIS's presence and bombing by the regime of Syrian President Bashar Assad regime. Libyans, who face death everyday due to the ongoing conflicts between warring factions, and other Africans, find ways to access Belgrade in the hope of a chance of entering an EU member state.

The effects of the migrant crisis are visible at the airport. Airport security there asked the Daily Sabah team what our motivation was to visit Serbia, how many days and where we were going to stay. Turkish citizens do not need a visa to visit Serbia and no migrant arrives in Serbia by plane. Convincing the police that we are not migrants and did not want to stay in Belgrade illegally or use the country as a transit point was difficult because of the lack of English, causing us problems to explain ourselves properly. Belgrade has been at the center of many wars as the Ottoman Empire, which governed the city for more than four centuries, and the Austro-Hungarian Empire battled for the city many times as well as Russians and Germans fighting over its control. The recent conflict in the Balkans that led to an unprecedented massacre in Srebrenica, Bosnia and the bombing of Belgrade by NATO forces also tired the country, especially Belgrade.

After finally leaving the airport and finding a taxi for 15 euros as we were warned before not to pay more than that to take us to the city center, we arrived in the center where the effects of war and poverty were evidently visible. Contrary to the treatment by airport security at the airport, the people on the streets were very positive to Turks and helpful. One Belgrade resident, Sofija, who was working for a tourism company, told us migrants have been becoming a bigger problem day by day as the poor country, which has serious financial problems, has been unable to tackle with the problem. Underlining the fact that these people were not leaving their homelands and coming to Belgrade eagerly, Sofija said: "The big powers put their hands on the region and devastate everything. These people are stateless, we have no money to offer them a good life and the world powers just watch." After describing to us where we could find refugees, she wished us the best. We took a taxi to go to the main Belgrade bus station around where migrants spend their days. The taxi driver, Boban, said: "They are too many and everyday more people are coming. The government and Europe have to collaborate to overcome the problem." Angrily saying that Hungary is building a fence on the Serbian border to prevent migrants from entering, Boban said: "Can you believe this? What are we going to do? We have no money but are forced to look after these people." Revealing his stance on the political division in Serbia of being pro-EU or pro-Russian, he said: "What is the EU doing? They want to finish off Russia over the Syrian war. The West's ambitions put us in trouble."

When we arrived near the main bus station we saw thousands of migrants in parks and on the streets. Families with their children and infants, young people and elderly men were sitting on sidewalks, on the grass and on the few benches. Migrants generally stay in Belgrade for weeks until finding a way to go west. During their stay they are unable to have a safe place to stay and are frequently subject to robbery. There was no bathroom and migrants were using the parks for their needs. In the almost 40-degree-Celsius-heat the heavy smell had engulfed the area. Besides the parks, some migrants were using empty buildings to stay at night. The luckier ones had the chance to find a place in a camp allocated by the Serbian government to stay temporarily. Serbia has six asylum centers and people can stay no more than two weeks.

Ahmad from Afghanistan told Daily Sabah he and his brother arrived in Belgrade after an almost 5,000-kilometer journey through Pakistan, Iran, Turkey and Bulgaria. He said: "We have no money left. The Serbian officials say they want money to deport us back to Afghanistan." Another migrant, Youssef from Aleppo in Syria, said: "We are here finally. My wife, our one-year-old baby and I reached Belgrade after almost two months. We had to give all of our money as bribes during the journey. We understand that Serbia has no money to accommodate us, but what can we do? Our home is ruined. Nothing is left back in Aleppo." His wife, Zahra, crying, said: "We would not want to have a life as such. That is fate. The police treat us badly. I know we cause problems. But we did not ruin our homeland."

Human Rights Watch (HRW), in a report published in April, said its investigations found that the Serbian police harass and abuse migrants. HRW accused the police of assaults, threats, insults and extortion. A HRW fellow said: "Serbian authorities should be protecting asylum seekers and immigrants, including children fleeing war and persecution, not allowing the police to victimize them." HRW warned: "Serbian authorities should immediately investigate cases of police abuse against asylum seekers and migrants and hold to account anyone found responsible."

"The government should issue clear guidance to police officers that they should treat asylum seekers and migrants with respect and in a manner consistent with human rights obligations, and should never summarily deport them. Officials should make clear that police will face punishment for harassment, violence and extortion. Serbian and international law prohibit ill-treatment and use of unjustified and excessive force by police, and require authorities to address police bribery and extortion," the report added. "The 1951 Refugee Convention and its 1967 Protocol, as well as its own constitution also bind Serbia to respect the right to asylum and the principle of non-refoulement, the prohibition on returning a person to where they may face persecution."

Serbia as a candidate for EU membership was told to apply requirements that meet EU regulations. However, Serbian officials, in several statements, complained about limited opportunities and budget to tackle the problem. The officials estimate that more than 220,000 asylum seekers have entered Serbia. "More than 34,000 migrants have been stopped and sought asylum in Serbia so far this year, mainly crossing from Macedonia and Bulgaria, up from 16,500 in 2014, but there are no clear figures on the overall numbers of people entering the country illegally."
RELATED TOPICS