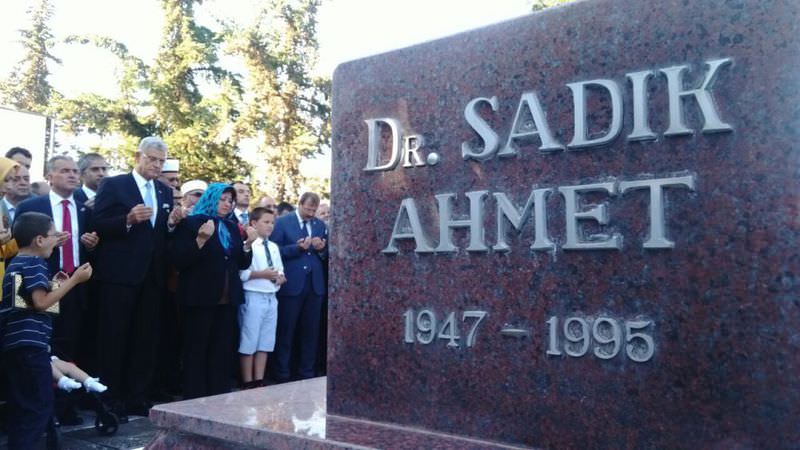 by Ali Ünal Jul 27, 2015 12:00 am
The founder of the Western Thrace Turks and Friendship Equality and Peace Party, Dr. Sadik Ahmet, was commemorated by Turks from Western Thrace with a series of events over the weekend. Speaking at the 20th memorial ceremony at his grave in Gümülcine (Komotini) last Friday, Minister for EU Affairs and Chief Negotiator Volkan Bozkır said that even 20 years later, Dr. Sadık Ahmet and his struggle are still alive and provide inspiration to future generations. Underlining that the Turkish minority in Western Thrace constitutes the most important and strongest connection between Turkey and Greece, Minister Bozkır added that the government has always wanted to have good relations with Greece. Bozkır said that good relations would also contribute to the Turkish minority's welfare and peace. While saying that he knows the current situation of the Turkish minority in Western Thrace is not what they wanted, Bozkır said that the improvement of Turkish-Greek relations would benefit a resolution. "The Turkish minority is the most important and strongest connection between Turkey and Greece and the consolidation of this connection will benefit both countries. As the Turkish and, hopefully, Greek governments, we will devote our efforts to the realization of this ideal." The minister said.

Western Thrace is located in the northeastern part of Greece extending over an area of 8,578 square kilometers and it is estimated that approximately 200,000 Turkish Muslims live in the area. The Greek government refers to them as "Greek Muslims," and flatly denies the existence of a Turkish minority in Western Thrace. Moreover, Human Rights Watch (HRW) reported that for many years, the Greek government has been trying to reduce the number of ethnic Turks in Western Thrace. This has been done via techniques ranging from the deprivation of citizenship to "encouraging" emigration to Turkey, to efforts to assimilate the Turkish minority. Since the 1990's, the situation of the Turkish Muslim minority has improved relatively compared to the previous decades and most of the human rights violations have come to end. Nevertheless, there has not been major progress in the field of the group-based collective rights of the minority. Greece has also attempted in the past to prosecute and jail elected muftis. Greece still does not recognize the elected muftis of the Turkish minority, despite a ruling by the European Court of Human Rights stating that Greece is violating the European Human Rights Convention in the context of religious freedom.

After the commemoration ceremonies, Minister Bozkır met with muftis and Turkish minority institutions on the second day of his visit to Gümülcine and İskeçe.
Last Update: Jul 27, 2015 10:15 pm
RELATED TOPICS