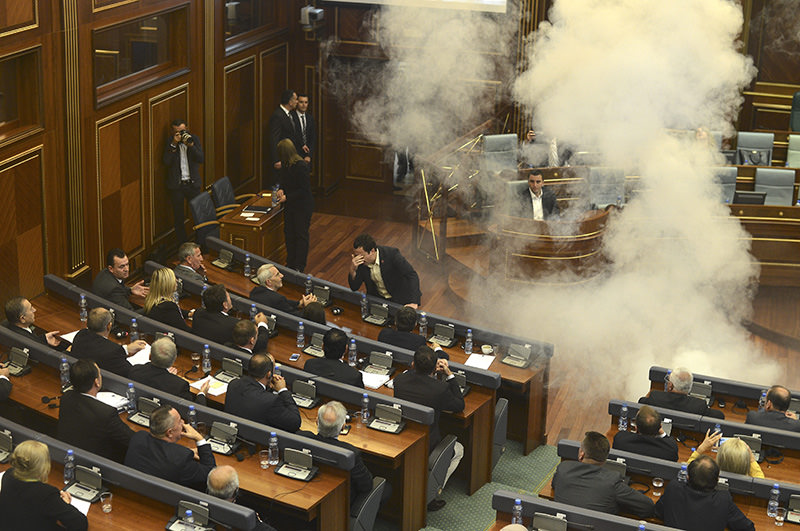 by Anadolu Agency
Oct 08, 2015 12:00 am
Kosovo opposition deputies threw tear gas canisters in Parliament on Thursday to protest the latest EU-brokered agreements between Kosovo and Serbia.

Opposition deputies first blew whistles and threw water at the speakers, but would succeed in ending the session just after throwing tear gas canisters on the assembly floor.

"As we have warned, this government has just two choices: withdrawing [from the agreements] or resigning," opposition MP Donika Kadaj- Bujupi said in Parliament. "We call on [the government] to withdraw from the agreements, harmful for Kosovo, and to turn back to Parliament where we would continue working."

This development comes as opposition deputies continue blocking the normal functioning of the Parliament for the third week in row. On Sept. 22 opposition deputies pelted with eggs Kosovo Prime Minister Isa Mustafa. Kosovo deputies began throwing eggs at the prime minister as he insisted that the agreements with Serbia were in full compliance with the Kosovar constitution.

Serbia and Kosovo signed on Aug. 25 four agreements, namely one on the establishment of an association of Serb majority municipalities.

The decision to form the Association of Serbian majority municipalities in the predominantly Albanian Kosovo, has been strongly decried by opposition political parties, the Self-Determination Party, the Alliance for the Future of Kosovo and the Initiative for Kosovo.

They argue that this would lead to what they call the "Bosniazation" of Kosovo, and thus create a dysfunctional country.

The Movement for Self-determination, the biggest opposition party in Kosovo, referring to Statistical Agency of Kosovo numbers said the association will have about 30 percent of Kosovo's territory, while serving 74,000 people -- less than five percent of the population.

The Movement for Self-determination said this association would be a "state within the state".

The Kosovo government has sent the agreement to the country's Constitutional Court to make sure it is in compliance with the constitution.

Kosovo is a former Serbian province populated by nearly 1.8 million people, over 90 percent of whom are Kosovo Albanians.

Kosovo declared its independence on Feb. 17, 2008 and is recognized by about 110 countries, including the U.S., the U.K, France, Germany and Turkey. Serbia, Russia and China are among countries that have not recognized the country's independence.
Last Update: Oct 08, 2015 5:58 pm