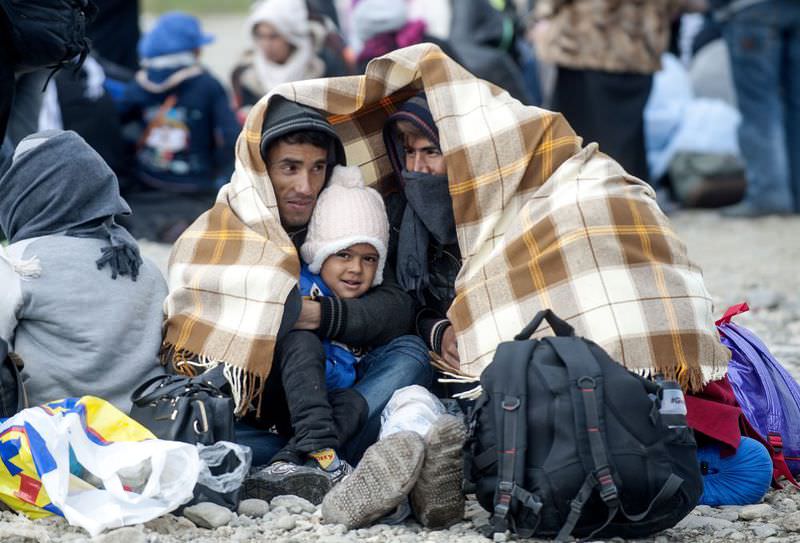 Migrants and refugees huddle together as they wait to enter a registration camp after crossing the Greece-Macedonia border near Gevgelija.
by Daily Sabah with Wires Oct 22, 2015 12:00 am

Thousands of refugees fleeing war and persecution in the Middle East have been spending freezing nights stranded in the Balkans. Ten EU and Balkan leaders will meet in Brussels on Sunday for talks on the ‘unfolding emergency'

European Commission President Jean-Claude Juncker has called an extraordinary meeting of several European leaders on Sunday to tackle the migrant crisis in the western Balkans as thousands trying to reach Germany are trapped in deteriorating conditions.

In the face of rising migrant numbers and sinking temperatures, the commission said in a statement yesterday that Juncker had invited the heads of state or government of Austria, Bulgaria, Croatia, the former Yugoslav Republic of Macedonia, Germany, Greece, Hungary, Romania, Serbia and Slovenia. The summit comes as hordes of refugees and other migrants camp by roads in western Balkan countries in worsening autumn weather after Hungary sealed its borders with Serbia and Croatia, causing a chain reaction in other overwhelmed states.

"In view of the unfolding emergency in the countries along the western Balkans migratory route, there is a need for much greater cooperation, more extensive consultation and immediate operational action," the commission statement said. The summit's aim was to agree on "common operational conclusions that could be immediately implemented," it said.

Slovenia passed legislation yesterday to give the army more power to help police guarding the state border as refugees streamed in from Croatia on the way to Austria, which is within the passport-free Schengen zone. Under the measure, Slovenian soldiers will be able to warn, direct and temporarily restrict the movement of persons and engage in crowd control over the next three months. After Hungary, Slovenia is now the second EU country and second member of Europe's passport-free Schengen zone to deploy the military to its borders during the migration crisis.

With 2 million inhabitants, Slovenia is the smallest country on the Balkan migration route. Leaders worry the country's population and infrastructure will be overwhelmed by the surge of migrants arriving after Hungary blocked its border on Oct. 16.

Serbia, Croatia and Slovenia have struggled to cope with the relentless flow of migrants traveling through the Balkans, their journey made more difficult since Hungary erected fences protected by razor wire, police and soldiers on its southern borders, forcing migrants to find new routes west. Hungary closed its border with Serbia to the free flow of migrants on Sept. 15 and clamped down on its border with Croatia on Saturday. Since then, over 20,000 migrants have entered Slovenia from Croatia, with many thousands more on their way.

The so-called "Balkan route" has been witnessing dramatic scenes as cold weather and heavy rains began to loom. Thousands of refugees fleeing war and violence in the Middle East spent a freezing night stranded on Serbia's border with Croatia.

A crowd estimated at 3,500 endured a night of nearly freezing temperatures at the formally closed crossing at Berkasovo-Bapska.

"We are humans, like Serbs and Croats," said Yassir, a young refugee from Damascus. "Would they let their own people suffer like this in the cold?" Most people huddled under tents and tarpaulin covers provided by aid agencies. Many gathered around bonfires, burning discarded rain ponchos, blankets and whatever else they could find. "There was also war here. Don't they remember how it was and how people had to run from their homes?" Yassir asked.

Police began allowing groups to enter Croatia in the morning, but hundreds of migrants lost patience and skirted police to bolt across the border. Wading between orchard trees through the mud and muck, the migrants began a 10-kilometer trek toward the reception center in Opatovac, a witness at the scene said.

Two U.N. officials coordinating efforts to help the migrants in the Balkans said Tuesday the EU effort to coordinate a response to the worst migrant crisis since World War II was being hampered by indecision. The U.N. representative in Serbia, Irena Vojackova-Sollorano, told AFP it was "rather frustrating for us to watch." She and her U.N. colleague in Macedonia, Louise Vinton, also warned there was no sign the influx of migrants was slowing down, as many had expected with the approach of winter. U.N. Refugee agency officer Francesca Bonelli said around 3,000 migrants were there overnight, including little children, the elderly, people in wheelchairs and many sick and exhausted.

Meanwhile, a fire broke out yesterday at a camp for migrants in Slovenia, the current gateway to Austria and beyond. The cause of the fire at the camp in Brezice, on Slovenia's border with Croatia, was not clear, but migrants had been lighting fires outside their tents to ward off the chilly fall weather. Firefighters extinguished the flames, which consumed several tents, while women and children were evacuated from the camp. Many of those at the Brezice camp arrived in the dark of night after wading or swimming across the Sutla River in temperatures close to freezing.

Last week, EU border agency Frontex announced that 710,000 refugees entered the EU in the first nine months of this year, while 282,000 entered in 2014. But it also cautioned that many people were counted twice. The crisis has exposed deep divisions within the 28-nation European Union over how to distribute the new arrivals - many fleeing conflict in Syria, Iraq and Afghanistan - and how to stem the flow.
RELATED TOPICS