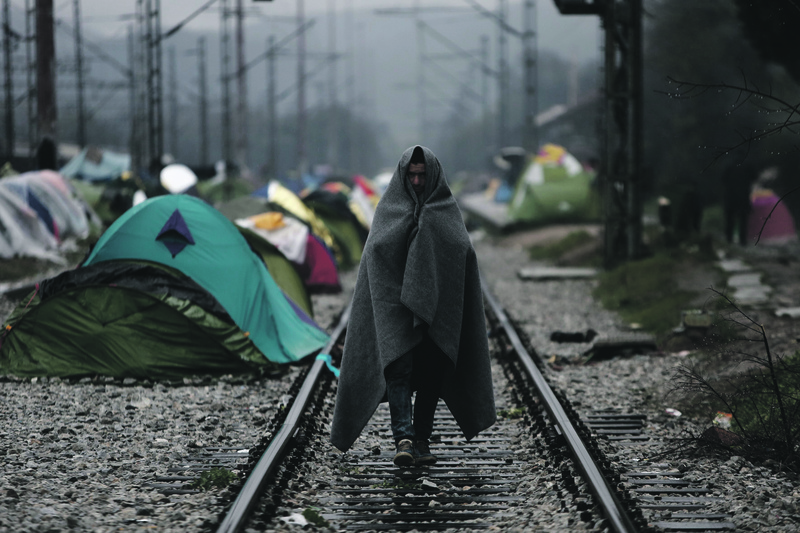 Migrants found their path blocked after a string of western Balkan countries slammed shut their borders, creating a dire humanitarian situation in the Macedonia. Italy and Albania are working to prevent migrants from diverting to their countries

The Balkan route - which has seen thousands of refugees stream across Greece, Macedonia, Serbia, Croatia and Slovenia as they seek to reach richer Western Europe - has been a key focus of the ongoing European migration crisis.

As of Wednesday, the final legal door seems to have been slammed shut on the route, after Slovenia announced it would close its borders to migrants. That move was the culmination of months of ever-increasing limits on the ability of refugees to traverse the path.

Slovenia and Croatia, two of the countries along the route used by hundreds of thousands of people in recent months, barred entry to transiting migrants from midnight. Serbia indicated it would follow suit. EU member Slovenia said it would make exceptions only for migrants wishing to claim asylum in the country or for those seeking entry "on humanitarian grounds and in accordance with the rules of the Schengen zone."

Prime Minister Miro Cerar said the move meant that "the (Balkan) route for illegal migrations no longer exists," while EU President Donald Tusk said on Twitter, "Irregular flows of migrants along the western Balkans route have come to an end." "Not a question of unilateral actions but common EU28 decision... I thank western Balkan countries for implementing part of EU's comprehensive strategy to deal with migration crisis," Tusk added.

As the 28-nation EU battles the worst migration crisis since World War II, the fresh measures ramped up the pressure on the bloc to seal a proposed deal with Turkey to ease the chaos.

Austria's decision in February to cap the number of migrants passing through its territory had already led to a gradual tightening of borders through the western Balkans - and a backlog in Greece. "This is putting into effect what is correct, and that is the end of the 'waving through' (of migrants) that attracted so many migrants last year and was the wrong approach," Austrian Foreign Minister Sebastian Kurz said.

Authorities in Greece said Wednesday that nearly 36,000 migrants were now stranded there. Police said a further 4,000 were unaccounted for. The U.N. refugee agency estimated Wednesday there were also as many as 2,000 migrants stuck in Serbia. There are fears that some will turn to people-smugglers and try their luck getting into Albania, and from there to Italy, or into Bulgaria.

Meanwhile, more than 14,000 mainly Syrian and Iraqi refugees have camped out on the Greece-Macedonia border crossing - many of them for weeks - at a squalid camp.

Macedonia has not let anyone enter since Monday. "We are hoping a miracle will happen," said Ola, a 15-year-old from war-scarred Aleppo who has lived in a tent at Idomeni with her mother and two younger brothers for two weeks. "We thought Germany wanted us. That's why we took the boat and came here."

Greek officials on Wednesday were trying to coax refugees to leave Idomeni for migrant centers elsewhere in the country. Many are reluctant to do so, however, fearing this would mean the end of their journey north.

More than a million people have crossed the Aegean Sea into Greece since the start of 2015, many from Syria, Afghanistan and Iraq and most aiming to reach wealthy Germany, Austria and Scandinavia. This has caused deep divisions among EU members about how to deal with the crisis and put German Chancellor Angela Merkel under severe pressure domestically for her open-door asylum policy.

German Chancellor Angela Merkel warned Thursday that closing the route used by migrants through the western Balkans "does not resolve the problem" and that this move is "not sustainable." "You don't resolve the problem by taking a unilateral decision," Merkel told public radio MDR, after western Balkan countries barred entry to transiting migrants from midnight Wednesday. "This situation is neither sustainable nor lasting," she said.

"Personally I think that Austria's unilateral decision, and then those made subsequently by Balkan countries, will obviously bring us fewer refugees, but they put Greece in a very difficult situation," she said. "If we do not manage to reach a deal with Turkey, then Greece cannot bear the weight (of migrants) for long," she said, urging a "decision that is right for all 28" EU member states. "That's why I am seeking a real European solution, that is, a solution for all 28," she stressed.

The majority of migrants come from the Middle East and Africa. The turmoil in the Middle East and the five-year war in Syria have led many people to flee the conflict in an attempt to seek security and shelter in a more prosperous and peaceful country, such as one in Europe. According to a recent data from EU border agency Frontex, nearly half a million migrants arrived in Greece in the last three months of 2015, most on the Western Balkan route.