Macedonia says it returned about 1,500 migrants to Greece 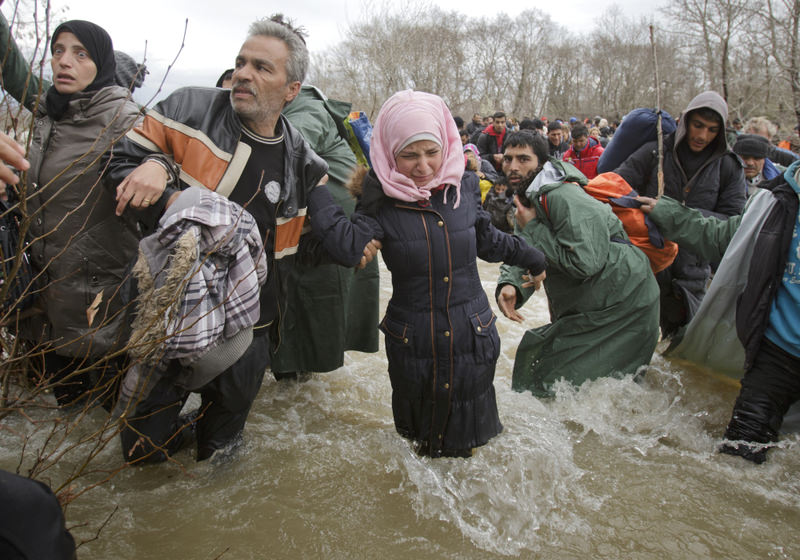 A woman cries as she crosses a river along with other migrants, north of Idomeni, Greece, attempting to reach Macedonia on a route that would bypass the border fence on March 14. (EPA Photo)
by Daily Sabah with Wires Mar 16, 2016 12:00 am

Macedonia has sent about 1,500 migrants and refugees who crossed the border on Monday back to Greece, Macedonian police said yesterday.

Most of the migrants, who marched out of the Idomeni transit camp in northern Greece on Monday and got around a border fence, had been taken back to Greece on Monday or overnight on trucks, an official said.

Hundreds of people waded through thigh-deep waters of a surging river to cross the border from Greece, and clung perilously to a rope strung between the banks to cross north into Macedonia, bypassing the closed regular border crossing. Some older family members stumbled after losing their footing in the swift-flowing water, while some parents carried children on their shoulders as they made their way across the make-shift river crossing.

Reporters and aid officials on the scene said the migrants had been left at the Greek border and that there were migrants on both the Greek and Macedonian sides of the border. About 1,500 people pushed their way into Macedonia on Monday through an unguarded section of the border, frustrated at being stuck for weeks in a waterlogged tent city outside the closed crossing of Idomeni. They walked about 5 kilometers and forded a swollen stream near the Greek village of Hamilo, but they were detained by Macedonian security forces.

At least 14,000 people, including thousands of children, have been stranded in the Idomeni camp in swampy conditions after days of heavy rain, their path to the European Union blocked after Macedonia and other nations along the so-called Western Balkan route closed their borders. EU leaders are trying to stem a flow of migrants and refugees that brought more than a million people fleeing war and poverty in the Middle East and beyond to the EU since early 2015.

They are due to hold a new summit with Turkey this week to seal an agreement intended to halt the exodus. Greek Prime Minister Alexis Tsipras blamed Monday's mass move to circumvent the border fence on misleading leaflets distributed at Idomeni, which encouraged the refugees to make a concerted push north. Tsipras said on Tuesday there was "no chance" border shutdowns throughout the Balkans would be lifted, and urged refugees to move to reception centers set up by the state.

Jan van't Land, an official with medical charity Doctors Without Borders at Idomeni, said around 400 migrants had returned to Idomeni camp. "There are still many hundreds of people on both the Greek and the Macedonian sides of the border," he told Reuters.

Conditions at the Idomeni camp have deteriorated after days of heavy rain. Scuffles have broken out there in recent days as destitute people scrambled for food and firewood, while many have been sleeping in the open. Concern about the spread of infections grew after one person was diagnosed with Hepatitis A.

Greek officials say leaflets that circulated at the Idomeni camp before Monday's march showed it was planned. "We are in possession of leaflets that show this was an organized incident, a very dangerous one, endangering people's lives," Greek government spokesman George Kyritsis told reporters on Monday evening.

Babar Baloch, a regional spokesman for the United Nations refugee agency, UNHCR, who is at Idomeni, said the migrants' breakout and return "hasn't solved anything." "It just increased sufferings of refugees. It started raining again. The sense of support for refugees in the region is missing," he said.

Meanwhile, Austrian Chancellor Werner Faymann is urging his German counterpart, Angela Merkel, to follow his country's example and set a limit on the number of asylum seekers Berlin is prepared to accept. The appeal from Faymann appears aimed at increasing pressure on Merkel ahead of Thursday's EU refugee summit. In an interview published yesterday by Kurier newspaper, Faymann said "Germany too needs a point of reference," and urged Merkel "to say clearly and openly" that there cannot be uncontrolled migration into Europe. Austria capped the number of asylum seekers it will accept this year at 37,500 after nearly 90,000 applied for that status in 2015.

More than a million migrants and refugees entered Europe in 2015 as the influx shows no sign of abating. Since Jan. 1, 2016, more than 153,000 migrants and refugees crossed the Mediterranean Sea, most of whom arrived in EU member Greece, according to the UNHCR. The turmoil in the Middle East and the more than five-year civil war in Syria have led many people to flee the conflict in an attempt to seek security and shelter in a more prosperous and peaceful country, such as one in Europe. However, Europe has been slammed for lacking a collaborative response to the crisis.