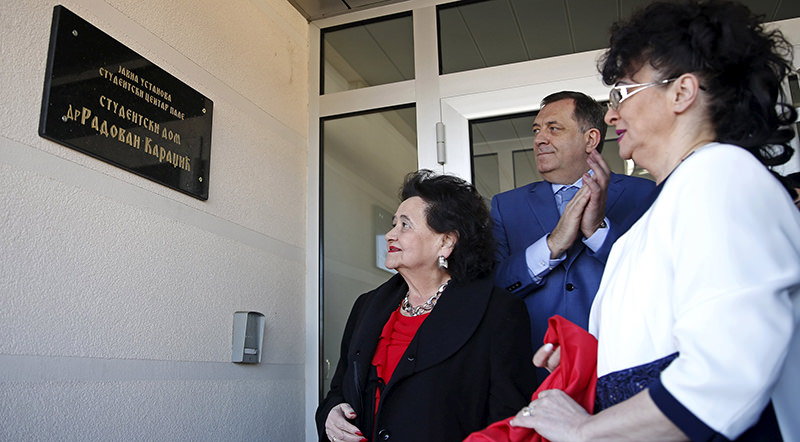 Bosnian Serb officials on Sunday inaugurated a student dorm named after wartime leader Radovan Karadzic only days ahead of a Hague-based war crimes court's verdict on his role in the 1990s conflict.

A plate with Karadzic's name was unveiled by Milorad Dodik, the president of the Bosnian Serb-run entity, Republika Srpska, at a ceremony attended by several hundred people, including Karadzic's wife Ljiljana and daughter Sonja, Bosnian Serb public broadcaster RTRS reported.

"We dedicated this place to the man who undoubtedly set the foundation of Republika Srpska -- Radovan Karadzic, the first president of this republic," Dodik said at the ceremony in Pale, a Bosnian Serb stronghold during the bloody 1992-1995 interethnic war.

The International Criminal Tribunal for Former Yugoslavia (ICTY) will on Thursday announce its verdict in Karadzic's case.

Karadzic faces charges of genocide for the killing of more than 8,000 Muslim men and boys from Srebrenica, Europe's worst massacre since World War Two, when ethnic Serb forces gunned down prisoners after trucking them to killing sites.

He is also held responsible for the 43-month siege of the Bosnian capital Sarajevo, in which more than 5,000 civilians died.

Dodik, a fierce critic of the ICTY, said the inauguration had "strong symbolism" at the moment when the court's highest-profile verdict is due.

"They judge only one side, not the others that equally contributed to everything that happened during the break up of Yugoslavia," Dodik said.

Karadzic, 70, had evaded justice for 13 years after the war, but was eventually arrested in 2008 in Belgrade and extradited to the ICTY, where he pleaded not guilty.

He was indicted on 11 counts, which include allegations stemming from the 1995 massacre of some 8,000 Muslim men and boys in the eastern town of Srebrenica and the 44-month-long siege of Sarajevo that claimed more than 10,000 lives.

The peace agreement that ended the war divided Bosnia into two semi-independent entities, Republika Srpska and the Muslim-Croat Federation.