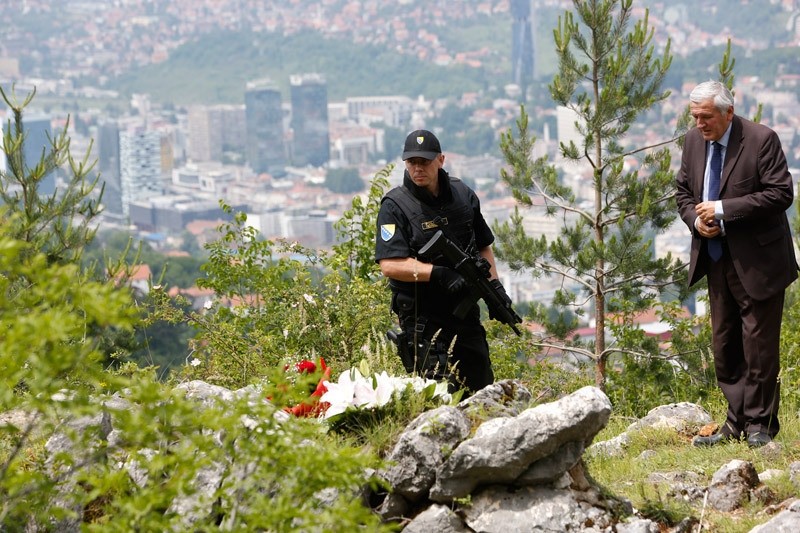 Bosnian leader Bakir Izetbegovic visited a memorial for victims of the 90s Bosnian War in the Bosnia-Herzegovina capital Sarajevo Monday.

Izetbegovic, who is the chairman of Bosnia and Herzegovina's Presidency Council, visited the Kazani Memorial, where 23 people, mostly Serbs, were killed during the war.

Addressing the media, Izetbegovic said: "Such things should never happen again to anyone. I felt a feeling of debt to Kazani. I wanted to be here early to express my condolences to people who were horribly killed here. This is the main purpose of my visit. I hope that this will have a positive political impact."

The number of victims in Kazani has not been officially determined; however, 23 bodies were recovered from a pit at the site during exhumations.

Out of the 23 bodies, only 15 were identified; five of these victims were females, while the rest of the 10 were males, aged between 27 and 66.

Two victims were Ukrainian, two others Croatian, another a Bosnian and 10 others were Serbs.

For the Kazani crimes, 14 former soldiers of the Army of Bosnia and Herzegovina were sentenced to between 10 months and six years in prison.

Musan Topalovic, commander of the 10th Mountain Brigade, is said to be main man responsible for the crimes in Kazani.

Topalovic was killed while he tried to escape in 1993 after getting arrested.