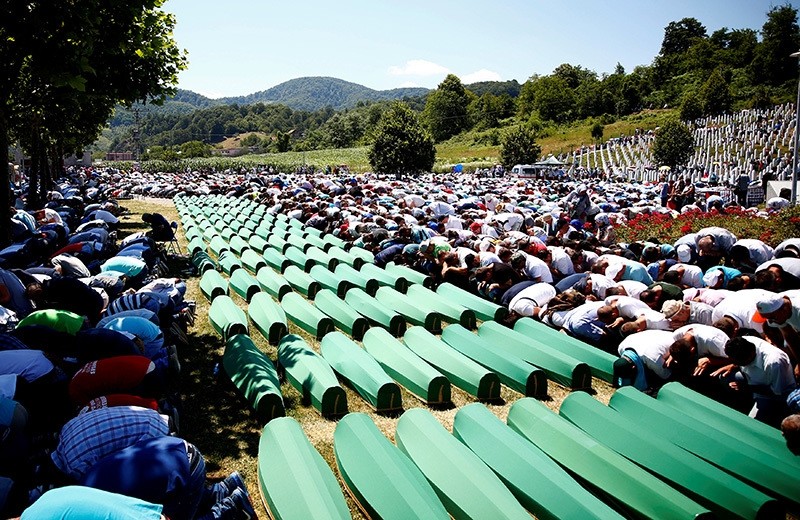 Muslim men pray in front of coffins during mass funeral in Potocari near Srebrenica, Bosnia and Herzegovina July 11, 2016. (Reuters Photo)
by Compiled from Wire Services Jul 11, 2016 12:00 am

Thousands have gathered in Srebrenica on Monday to mark the 21st anniversary of Europe's worst mass murder since the Holocaust and to attend the funeral of 127 newly-found victims.

Family members sobbed as they hugged the coffins for the last time before they were buried at a cemetery next to 6,337 other victims found previously in mass graves. The youngest victim buried this year was 14, the oldest 77.

The ceremony avoided by Serbs after survivors said they were not welcome because they denied genocide had occurred.

The United Nations had declared Srebrenica a safe haven for civilians, but that didn't prevent Serb soldiers from attacking the town they besieged for years. As they advanced on July 11, 1995, most of the town's Muslim population rushed to the nearby U.N. compound in hopes the Dutch peacekeepers would protect them.

But the outnumbered and outgunned peacekeepers watched helplessly as Muslim men and boys were separated for execution and the women and girls sent to Bosnian government-held territory. Nearly 15.000 residents tried to flee through the woods, but were hunted down and also killed.

International courts defined the massacre of more than 8,000 people as an act of genocide.

Serb forces subsequently dug up the bodies and scattered them in a systematic effort to conceal the crime. U.N. war crimes investigators later excavated the mass graves, but over 1,000 bodies are still missing.

During the process, the half-decomposed remains were ripped apart by bulldozers so that body parts are still being found in more than 100 different mass graves and put together and identified through DNA analysis.

Then they are buried each year at the memorial center across the road from the former U.N. base where most of the victims were last seen alive.

Fatima Duric, 52, buried her husband whom she saw last when Serbs overran the eastern Bosnian enclave at the end of Bosnia's 1992-95 war.

Duric lost her husband as they fled with their two children through the woods and walked for days toward government-held territory.

"After all these years, his body was found. In fact, just a few bones. I am burying them today," Duric said.

Most Serbs, both in Bosnia and Serbia whose 1990s leadership armed and funded Bosnian Serb forces, strongly deny that the massacre was genocide as judged by the U.N. war crimes tribunal for former Yugoslavia.

They dispute the death toll and the official account of what happened, reflecting conflicting narratives about how and why Yugoslavia broke up in bloodshed. That divide continues to hinder reconciliation and stifle Bosnia's progress toward integration with Western Europe. The Balkan country today is split into autonomous Serb and Bosniak-Croat entities.

For Muslim Bosniaks, Srebrenica has become a symbol of collective suffering and July burials of victims an annual ritual. July 11, the start of the five-day massacre, was made a national day of mourning by Bosnia's weak post-war central government comprised of Bosniaks, Serbs and Croats.

Some Serb officials attended previous burial ceremonies but this year was the first time none came after families said that those who deny genocide happened in Srebrenica were not welcome.

"How can anyone say this was not a genocide?" said Nura Suljic, 57, pointing at endless rows of white marble tombstones in the flower-shaped Potocari memorial cemetery near Srebrenica, where more than 6,300 victims are now interred.

Suljic buried her brother after his bones were found in three different mass graves.

Bakir Izetbegovic, the Bosniak chairman of Bosnia's three-person inter-ethnic presidency and son of its late wartime president, urged Serbs to face up to historical facts.

"Acceptance and recognition of the truth is the first step towards genuine trust," he said.

Last year's 20th anniversary was marred when an angry crowd at the ceremony chased away Serbian Prime Minister Aleksandar Vucic, who had enlisted ally Russia to veto a U.N. resolution that would have condemned the denial of Srebrenica as genocide.

Survivors did not want a possible repeat of any such incidents that would distract attention away from the victims.

Serbian and Bosnian Serb officials bristled at the condition for attendance. "That was not genocide and Serbs will never accept that word," Bosnian Serb President Milorad Dodik said.

Thousands of grieving families stood by green-draped coffins in sweltering mid-summer heat, some kneeling, crying and hugging the caskets before they were lowered into freshly-dug graves.

"All I have been left with are these three cold stones I can hug instead of my two sons and husband, and a grief I will carry in my heart until I die," said 67-year-old Nezira Memic.