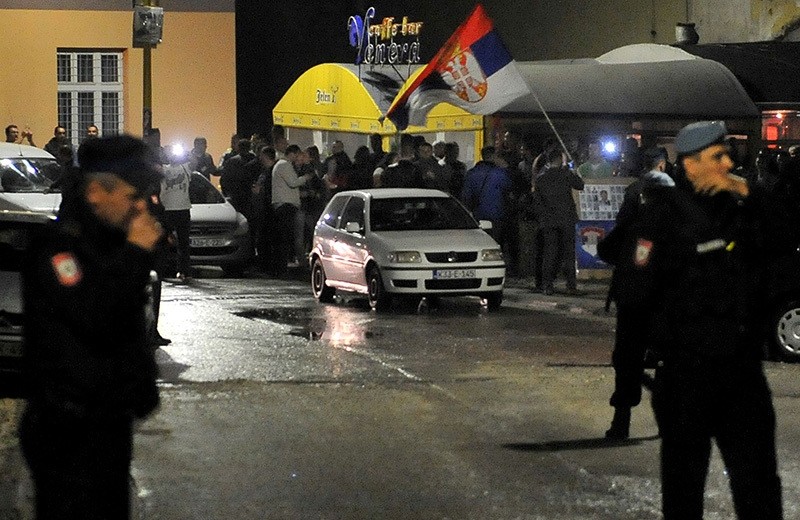 Bosnian police control streets while a group of Bosnian Serbs wave Serbia's national flag as they gather in the center of the eastern Bosnian town of Srebrenica, in the early hours on October 3, 2016. (AFP Photo)
by Oct 05, 2016 12:00 am

The Bosnian town of Srebrenica, known for the wartime massacre of 8,000 Muslims by Serb forces, looked set to get its first Serb mayor in 17 years after elections on Sunday.

A Muslim war criminal was also poised to become mayor in the northwestern town of Velika Kladusa following the poll, which came at a time of renewed tensions in the fragile country.

Based on a preliminary vote count in Srebrenica, 34-year-old Mladen Grujicic declared victory over his Muslim opponent and said people had shown "they want changes".

If confirmed, Grujicic's victory would make him the town's first Serb leader since 1999, although his rival and the incumbent mayor Camil Durakovic said it was too soon to declare with postal votes not yet counted.

Srebrenica today is a microcosm of Bosnia, with Muslims and Serbs living side by side but by no means together -- still distrustful more than two decades after Bosnia's 1992-1995 war, which claimed 100,000 lives and displaced two million people.

Grujicic assured that the town hall would continue to help commemorate July 11, 1995 -- the date of Europe's worst massacre since World War II.

In the mass slaughter -- deemed genocide by two international courts -- Bosnian Serb forces carried out the executions of thousands of Muslim men and boys, despite the enclave being under UN protection.

"I want us to turn the page in Srebrenica, to have a new life, to look ahead, to develop Srebrenica in all areas, to ensure that people stay here, regardless of their faith or ethnicity," said Grujicic.

In the northwestern town of Velika Kladusa, the position of mayor was expected to go to war criminal Fikret Abdic, 77, who was convicted by a Croatian court in 2002.

During Bosnia's war, the Muslim warlord sided with the Serbs against Muslim forces loyal to Sarajevo and proclaimed an "Autonomous Province of Western Bosnia".

He was released in 2012 after serving two-thirds of a 15-year jail sentence.

This year tensions in Bosnia are particularly strong, intensified by the decision of its Serbs at a referendum last weekend to continue celebrating their "national holiday" -- despite Sarajevo authorities ruling the holiday and the plebiscite illegal.

The Dayton peace accords that ended the war in 1995 split Bosnia into two semi-independent entities -- the Serb-run Republika Srpska (RS) and a Muslim-Croat federation -- linked by weak central institutions.

The political leaders on both sides, Milorad Dodik in the RS and Muslim Bakir Izetbegovic, led aggressive campaigns ahead of Sunday's vote using nationalist rhetoric.

Dodik proclaimed the victory of his SNSD party late Sunday, saying it had won in 11 more municipalities than in previous elections.

The nationwide vote, which saw turnout of 53.8 percent among an estimated 3.2 million voters, was marked by a minor clash between Muslims and Croats in the country's south.

A fight broke out in the southern town of Stolac when a Muslim candidate, complaining of fraud, lashed out violently at an ethnic Croat who was overseeing the poll, said national electoral commission chief Ahmet Santic.

Three people were slightly injured and polling was cancelled in the town of 14,500 inhabitants, a mix of Croats and Bosnians.