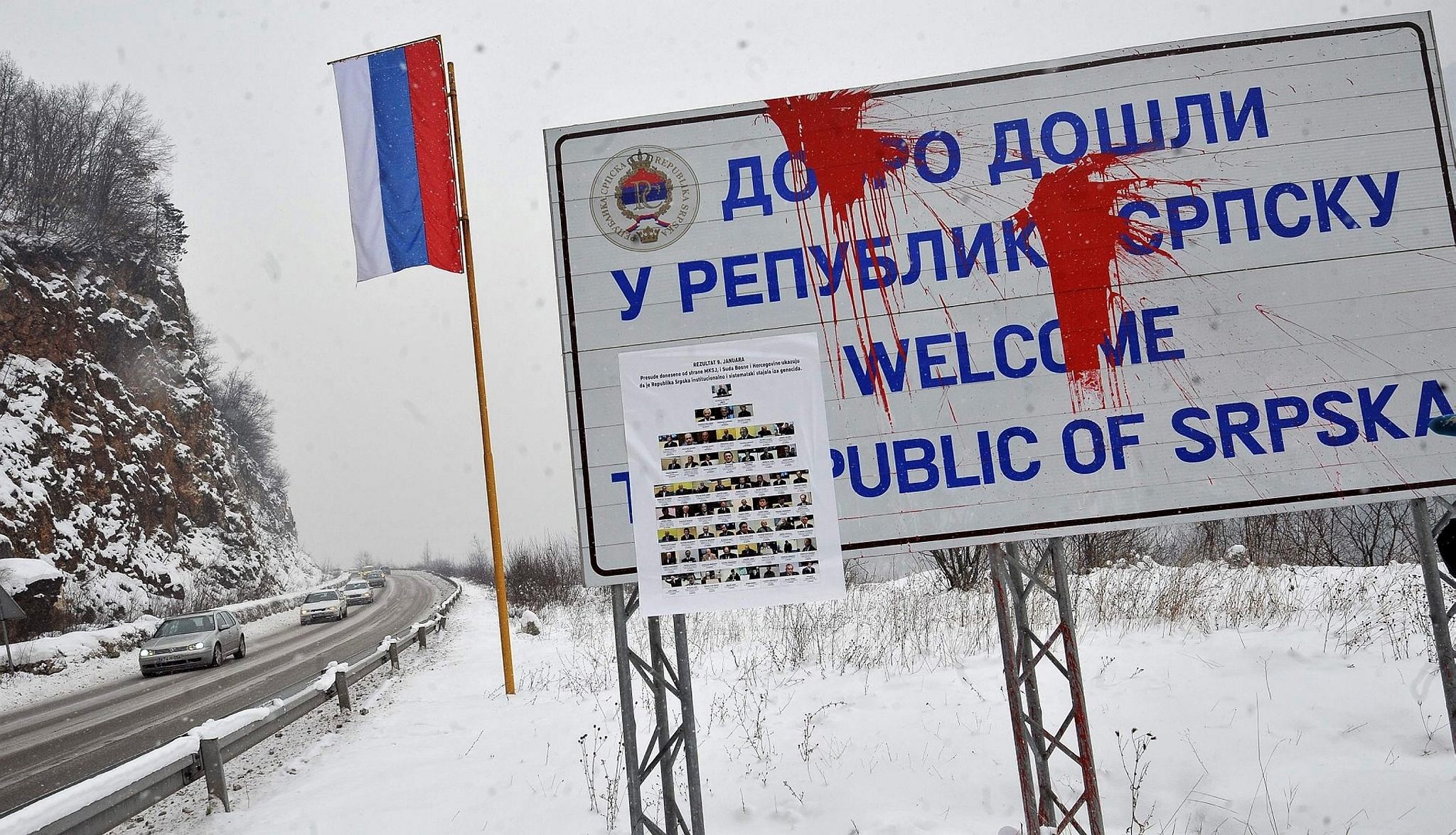 A vandalised road sign is pictured on a road near Sarajevo, on January 9, 2017. The sign was vandalised and a poster with portraits of Bosnian Serbs wartime leaders convicted by war crimes tribunal in The Hague is displayed (AFP Photo)
by Anadolu Agency Jan 10, 2017 12:00 am

People in Bosnia and Herzegovina's Serbian autonomous entity - Republika Srpska - celebrated the creation of the small state for the second year in a row on Monday, defying a ruling from Bosnia's highest court.

Celebrations, which were backed by senior members of the entity's government, began with a parade in Banja Luka city.

Monday's ceremony was secured by around 1,000 police officers, and the entire city was decorated with Republika Srpska flags.

Republika Srpska's president, Milorad Dodik, told a rally in Krajina Square that the entity had been created "as a response to the Serbian people's call for achieving freedom in this region".

"We will never give up on Republika Srpska," he added.

Serbia's Prime Minister Aleksandar Vucic earlier issued a message of "sincere support" to Republika Srpska but did not attend in person, due to an official visit to India.

Bosnian Serbs consider Jan. 9 to be their small state's most important holiday.

However, in late November 2015, Bosnia's Constitutional Court ruled that celebrating Dan Republika Srpska [Republika Srpska Statehood Day] could be discriminatory to other ethnic groups in the country.

The Constitutional Court of Bosnia Herzegovina was established by the Dayton peace agreement that ended the Bosnian War in 1995. It consists of two Bosniak, two Serb, two Croat and three foreign judges and its decisions are legally binding.

However, Serbs in Republika Srpska overwhelmingly passed a controversial referendum on a "national holiday" in defiance of Bosnia's highest court in September last year.

Over 99 percent of voters in the Serb-majority territory chose to make Jan. 9 "Statehood Day" - fueling fears the referendum could be a first step towards seeking independence from Bosnia, a country torn apart by violent ethnic conflict in the 1990s.

That investigation is ongoing.