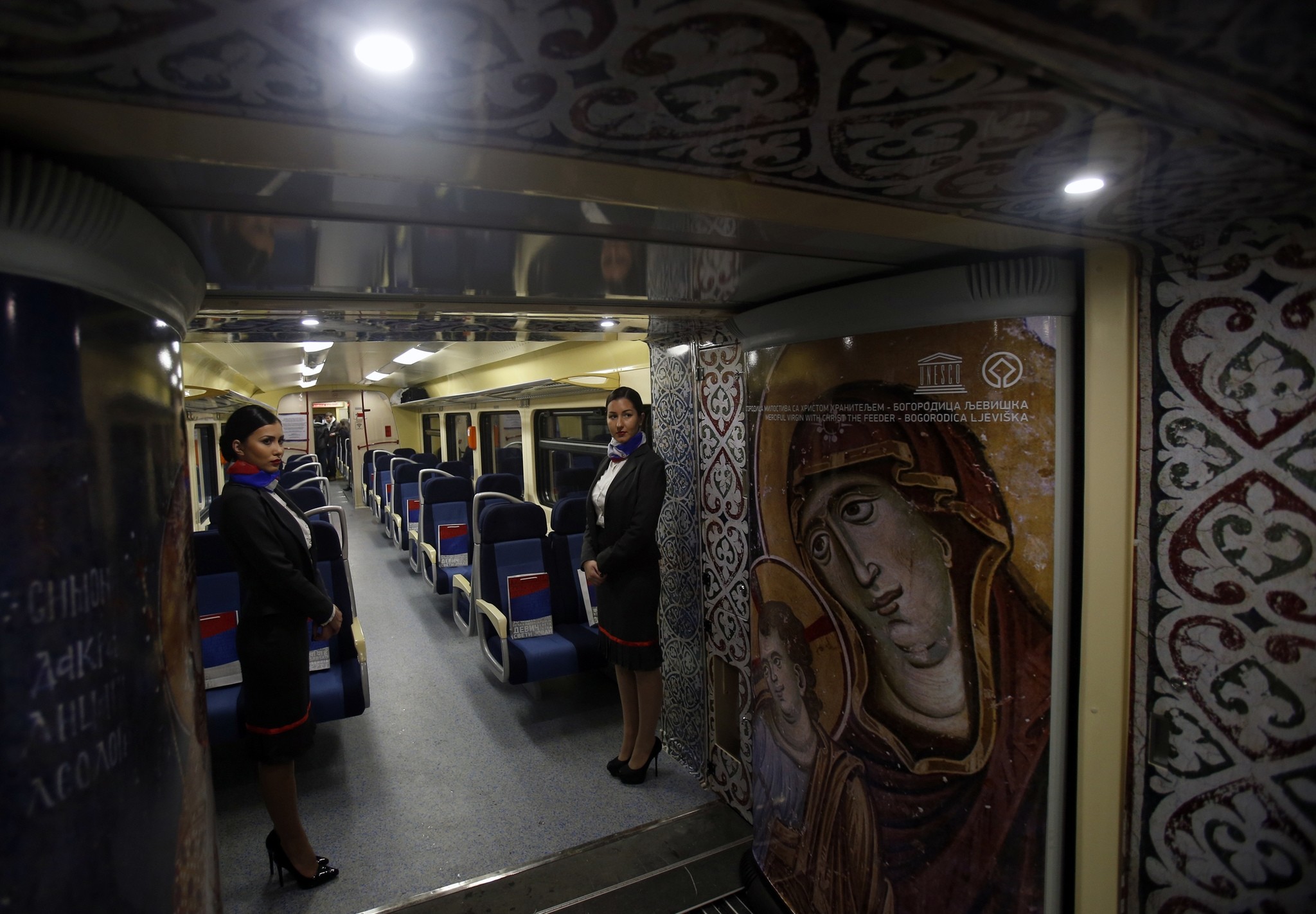 A Serbian train decorated with the national colors and plastered with icons and a nationalist slogan left Belgrade on Saturday for Kosovo, the former Serbian province, but was halted just before the border as tensions flared.

Serbia had styled the train as a bid to revive the first rail service from the Serbian capital to the mostly ethnic Serbian north of Kosovo since a bloody war 18 years ago that propelled Kosovo towards independence.

But Kosovo denounced the scheme as a provocation and an attempt to damage its territorial integrity. Its president, Hashim Thaci, called on "leading officials to take the necessary measures to stop this train, which threatens Kosovo's sovereignty".

Several hours after the train left central Belgrade, Serbian Prime Minister Aleksandar Vucic said he had ordered it to be halted in southwest Serbia, just before the border with Kosovo, because of fears it would be attacked.

"I decided to stop the train at Raska to avoid a conflict and save lives," Vucic told a press conference in Belgrade.

He accused the Kosovo government of sending police units to the north of the territory to "provoke a wide-ranging conflict".

"Serbia wants peace... but I ask the Albanians of Kosovo not to try attacking Serbs in Kosovo because Serbia will not allow it," Vucic warned.

Although most of Kosovo is ethnically Albanian, many Serbs consider it their native homeland and a cradle of their culture.

Some 13,000 people were killed in the 1998-1999 war, sparked by clashes between the forces of the rump Yugoslav state -- Serbia and Montenegro -- and Kosovo separatists. The conflict ended when NATO carried out an air campaign against Serbia.

Kosovo unilaterally declared independence in 2008, but Serbia and its ally Russia have yet to recognize its sovereignty.

The train, painted in the red, blue and white of the Serbian flag, was decorated inside with replicas of religious icons from Serbian Orthodox monasteries located in Kosovo. It also bore the inscription: "Kosovo is Serbia".

It would allow the majority Serbian population in Kosovo's north "to have better communication with central Serbia", he said.

"Who has the right to call for the violation of a fundamental right -- that of free movement?"

"The introduction of an illegal rail service represents interference which threatens our sovereignty and proves Serbia is seeking to destabilize Kosovo," said Edita Tahiri, who leads Kosovo's negotiating team with Belgrade.

The central Kosovo government has no real control over the predominantly ethnic Serb north and that region's borders with Serbia. It appealed to the European Union to "stop this illegal train".

Ill-feeling between Serbia and Kosovo is at its worst since the signing of a historic agreement in 2013, under the aegis of the EU, to normalize relations.

The train incident coincides with an attempt by Serbia to have Kosovo's former prime minister, Ramush Haradinaj, extradited from France for alleged war crimes.

Haradinaj has already been twice tried and acquitted at the International Criminal Tribunal for the former Yugoslavia (ICTY) in The Hague.