Row between Serbia and Kosovo over train intensifies 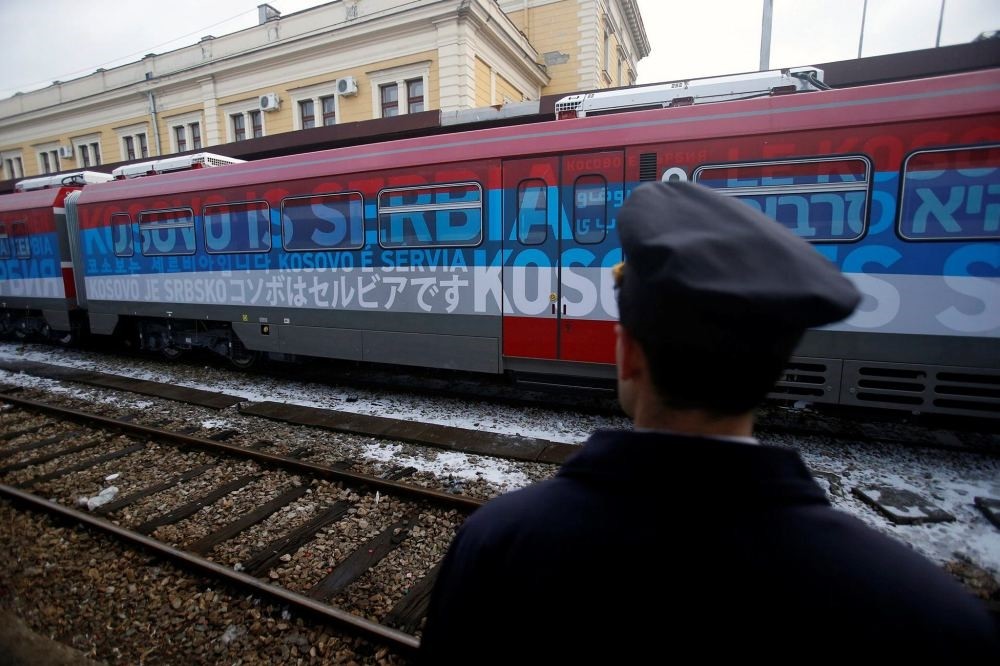 A railroad worker stands by the first train decorated with letters that read u201cKosovo is Serbianu201d written in twenty languages departing from the Belgrade to Mitrovica, Kosovo at Belgradeu2019s railway station, Serbia, Jan. 14.
by Compiled from Wire Services
Jan 17, 2017 12:00 am

Officially seeking European Union membership, Serbia is threatening Kosovo with intervention triggering a major political row in the Balkans. The conflict has intensified after a Serbian train, with signs saying ‘Kosovo is Serbian' was halted before it entered Kosovo

A Serbian train halted at the border with Kosovo and bearing signs reading "Kosovo is Serbian," has fueled a major crisis in the Balkans and escalated a potential Russia-West row over dominance in the heart of the war-torn region.

President Tomislav Nikolic said the neighbours had been "on the brink of conflict" on Saturday, while Kosovo's prime minister told reporters the train, a project of the Serbian government, sent "a message of occupation."

Serbia accused Kosovo's leaders on Sunday of "wanting war" and warned that it would defend "every inch" of its territory, a day after the train, provocatively decorated in Serbian Christian Orthodox symbols and flags, was prevented from entering the neighboring nation.

Kosovo, supported by much of the West, declared independence from Serbia in 2008. But, Serbia and its Slavic Orthodox ally, Russia, do not recognize the split.

Serbia has sought to maintain influence in Kosovo's north, where most of the country's Serb minority lives. NATO-led troops have controlled Kosovo's borders since a three-month air war in 1999 to stop a bloody Serbian crackdown against ethnic Albanian separatists.

Kosovo Prime Minister Isa Mustafa said he had contacted the United States and the European Union to express his country's concerns. "The time of provocation, conflicts and wars should belong to the past," Mustafa said, adding that such moves "are unacceptable, unnecessary actions that do not contribute to the normalization of the relations between our two countries."

Kosovo's President Hashim Thaci said on his Facebook page that he hopes "Serbia has learned a lesson" from the latest incident.

Serbia officially is seeking European Union membership, but has lately been sliding toward the Kremlin and its policies to increase its influence in the Balkans. Serbia has strained relations with most of its neighbors — something many analysts believe is a Russian influence.

Relations between Belgrade and Pristina came under renewed strain on Jan. 4 when former Kosovo Prime Minister Ramush Haradinaj was arrested in France on a warrant from Serbia which accuses him of war crimes. Kosovo has called the warrant illegitimate and urged France to ignore it, while Serbia is urging Haradinaj's quick extradition to face war crimes charges.

Kosovo Albanians make up more than 90 percent of Kosovo's 1.8 million population. Northern Kosovo, where Mitrovica is situated, is home to a Serb minority of around 40,000 to 50,000 people who do not see Pristina as their capital.

Normalizing relations between Kosovo and Serbia is key condition for both countries to progress towards membership in the European Union both governments are aiming for. In 2013 Belgrade and Pristina opened an EU-mediated dialogue to normalize relations, but Serbia is still blocking Kosovo's membership in international organizations including the United Nations.
Last Update: Jan 17, 2017 1:40 am