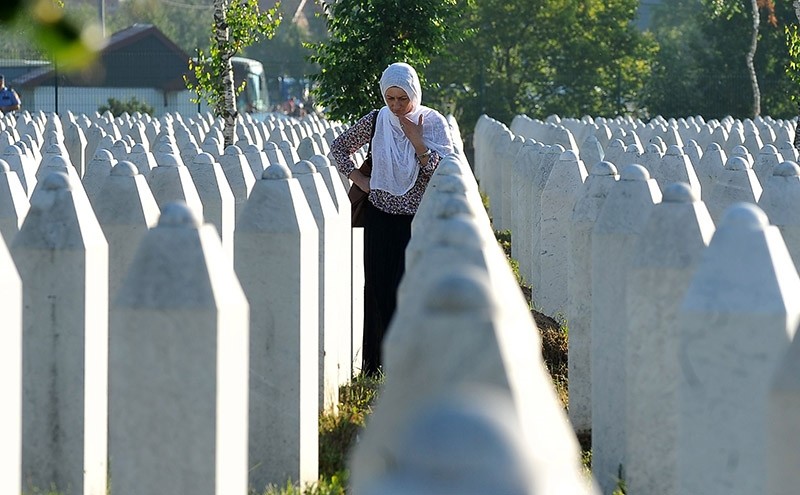 A Bosnian Muslim woman, survivor of Srebrenica 1995 massacre mourns near graves of her relatives, at memorial cemetery in village of Potocari, near Eastern-Bosnian town of Srebrenica. 2016. (AFP File Photo)
by Feb 01, 2017 12:00 am

A Bosnian Serb woman has been indicted for taking part in the killing of 37 Muslim Bosniak prisoners of war early in the Balkan country's 1992-95 war, the office of a Bosnian war crimes prosecutor said in a statement on Monday.

Visnja Acimovic, known as 'Beba', 44, is accused of war crimes against the civilian population and of acting against international humanitarian law by violating provisions of the Geneva Conventions, the statement said. The war crimes department at Bosnia's state court is pursuing the prosecution.

Acimovic is accused of "consciously and willingly" taking part, along with another soldier from the Bosnian Serb army, in the murder of 37 Bosniaks in eastern town of Vlasenica in June 1992.

The men were brought by bus from the Vlasenica prison to the location where Acimovic shot them down from a fire arm at close range. The bodies of the victims were found in 2000 and unearthed from the same site where they were murdered, the statement said.

Acimovic, among a handful of women accused of war crimes in the Bosnian war, has a dual Bosnian and Serbian citizenship and lives in Serbia, where she was questioned in the case, prosecution spokesman Boris Grubesic told Reuters.

Bosnian Serb forces conducted a campaign of persecution and killings of non-Serbs in the territories they slated for their exclusive Serb statelet during the war.

Several hundreds of thousands died in the conflict. Around a third of the victims, most of them Muslim Bosniaks, were killed in the eastern Bosnia.