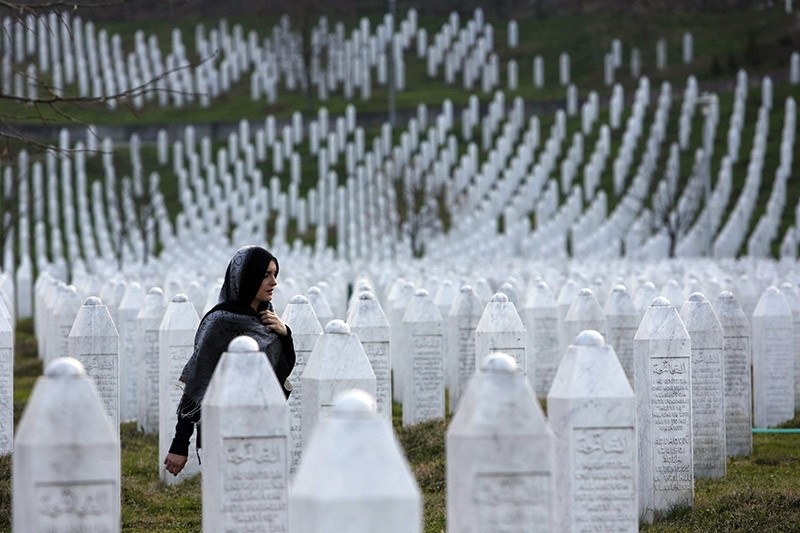 A Bosnian woman walks among gravestones at Memorial Centre Potocari near Srebrenica. (AP File Photo)
by Associated Press Feb 07, 2017 12:00 am

The landmark trial of eight former Bosnian Serb police officers charged with taking part in the 1995 Srebrenica massacre started in a Serbian court on Monday with judges rejecting another postponement.

The long-awaited trial at the War Crimes Court in Belgrade is seen as a test of Serbia's pledge to deal with its wartime past and an important step in Balkan reconciliation efforts more than two decades after the Bosnian war ended.

The proceedings mark the first time that a Serbian court deals with the killing of around 8,000 Muslim men and boys in Srebrenica, at the time a U.N.-protected enclave, by attacking Bosnian Serb troops — Europe's worst single atrocity since World War II.

Serbia, which armed and backed the Bosnian Serbs during the 1992-95 war, has promised to punish war criminals as it advances toward EU membership. The country's nationalist government has faced criticism for stalling on that pledge.

The trial was supposed to start in December, but was postponed over defense demands to know the identity of protected witnesses interviewed by prosecutors.

On Monday, one of the defense lawyers demanded another adjournment, claiming the testimonies by the protected witnesses — believed to be Bosnian Serbs who were in the firing squads — were illegal as they were given without the presence of defense attorneys.

The eight suspects are charged with participating in the killing of hundreds of Muslims in a warehouse in Kravica, a village outside Srebrenica, as they tried to escape the Serb onslaught.

Around 1,300 were crammed into the warehouse in the village and then killed with grenades and machine guns in a rampage that lasted all night.

Among the suspects is a special police unit commander, Nedeljko Milidragovic, also known as "Nedjo the Butcher," accused of ordering the killings.

The group was apprehended in 2015. They were later released despite the gravity of the charges.