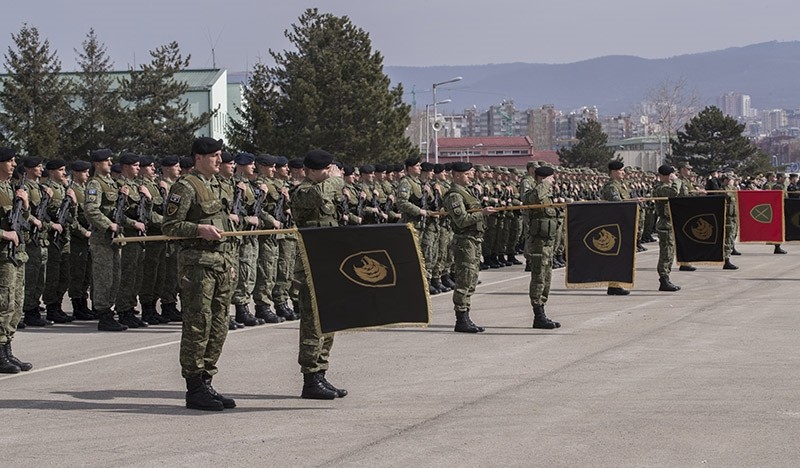 A photograph made available on March 8 and dated March 5, 2017 shows members of Kosovo Security Force attending the ceremony to mark the 19th anniversary of Kosovo Liberation Army Commander Adem Jashari death, in Pristina, Kosovo. (Photo via EPA)
by Compiled from Wire Services Mar 09, 2017 12:00 am

Kosovo signalled on Wednesday plans to turn its security force into a national army, a move strongly opposed by its ethnic Serb minority and by Belgrade which said it would cause instability in the region.

Nearly two decades after the Kosovo war, relations between Belgrade and Pristina remain strained and Serbia continues to regard Kosovo, which declared independence in 2008, as a renegade province.

The Kosovo government ordered the creation of a national army three years ago but Serbian deputies said they would block the required changes to the constitution.

On Wednesday parliament indicated it would bypass that opposition by preparing amendments to an existing law that would allow the Kosovo Security Forces (KSF) to buy heavy weapons,effectively turning it into an army.

A vote is expected in the coming days. Serb deputies, who number just 11 in the 120-strong chamber but whose support would be needed to change the constitution, said they would boycott the session.

On the other hand, NATO's chief said the alliance could scale back cooperation with Kosovo's security services if the government goes ahead with plans to transform its lightly armed security force into an army.

NATO Secretary General Jens Stoltenberg said Wednesday that he told Kosovo's leaders "that unilateral steps such as these are unhelpful."

He warned that if Kosovo goes ahead as planned "NATO will have to review its level of commitment, particularly in terms of capacity-building." NATO advises, trains and has been helping to build up Kosovo's security force.

Relations between Kosovo and Serbia have been tense recently and the move is likely to make things worse, with Serbia vehemently opposed. Kosovo declared independence in 2008. The move has been recognized by 114 countries but not Belgrade.