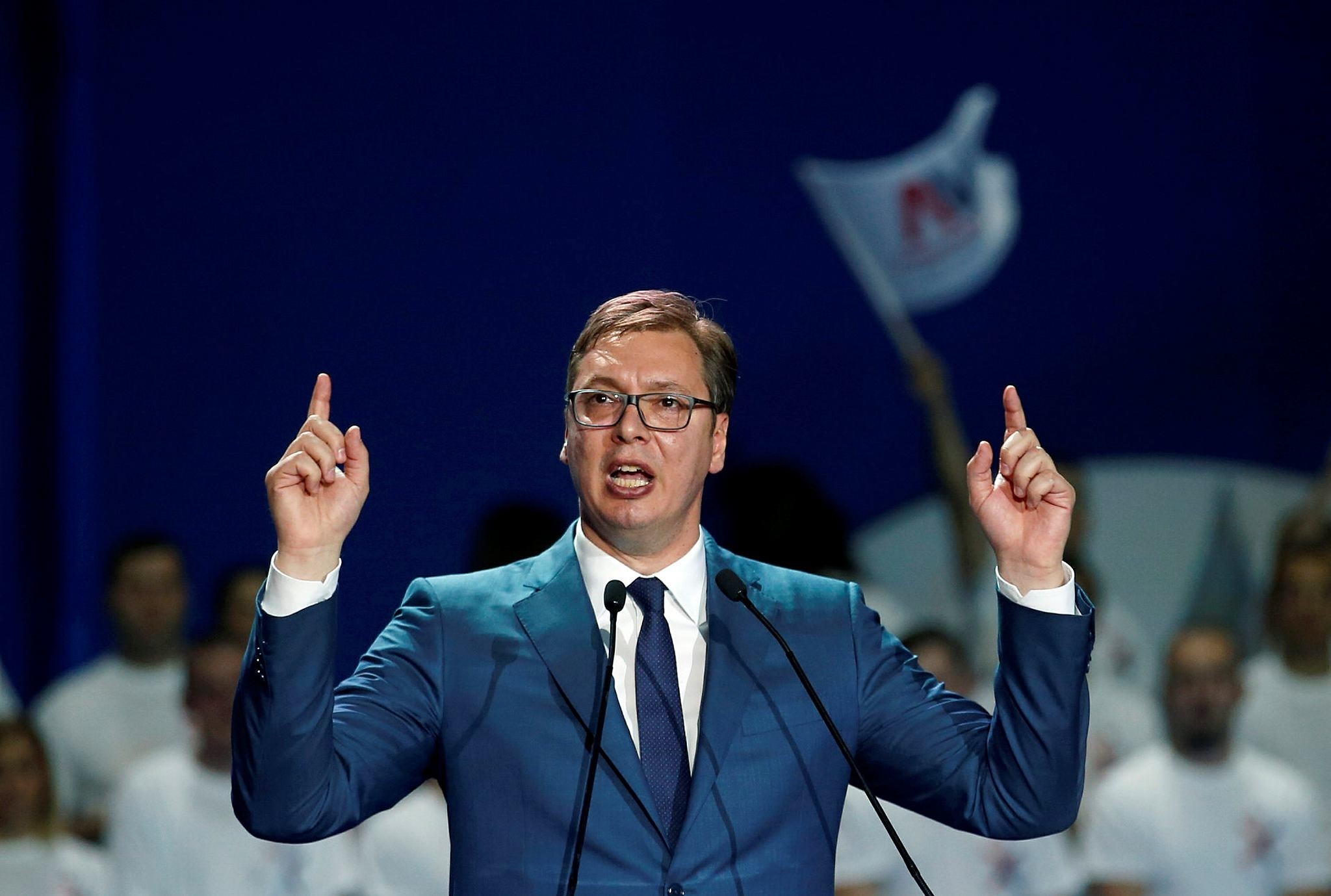 Aleksandar Vucic, who declared victory in Serbian presidential elections on Sunday, has undergone a remarkable political transformation from ultra-nationalist to pro-European liberal.

Once banned from entering the European Union during the 1990s Balkan wars, when he was a close ally of Slobodan Milosevic, the tall 47-year-old is now spearheading Serbia's efforts to join the EU after a dramatic switch away from nationalism.

Vucic, prime minister since April 2014, won Sunday's presidential election in the first round, picking up around 55 percent of the vote, according to an estimate by the research institute IPSOS.

In 2009, Vucic appeared on Serbia's version of the hit TV show "Dancing With The Stars" -- and he has had to be nimble on his feet in his relations with the EU on one side, and traditional ally Russia on the other.

Seen as a pragmatic rather than passionate supporter of the EU, Vucic refused to join the bloc in sanctioning Moscow over the Ukraine crisis.

He told Russian President Vladimir Putin that Serbia "showed our friendship when times got tough."

However, he is seen as a reliable partner for his "cooperative" approach in a troubled region.

"Serbia moves forward. We do not hide our interests, we do not lie to anyone, we keep our word and know what we want," he said recently.

Political analyst Jadranka Jelincic said Vucic's practical approach has meant the West has been prepared to "turn a blind eye" to accusations of authoritarism, populism and media control.

A lawyer by training, Vucic joined the far-right Serbian Radical Party in 1993 and soon became one of its top officials, known for his hardline speeches.

He fiercely defended the actions of ethnic Serb leaders during the 1992-95 war in Bosnia.

"You kill one Serb and we will kill 100 Muslims," he said in July 1995, just days after Bosnian Serbs killed almost 8,000 Muslim men and boys in the Srebrenica massacre.

In 1998, he was appointed information minister by then-president Milosevic, the so-called "Butcher of the Balkans", who later died awaiting a verdict in his war crimes trial.

As late as 2007, Vucic said his home would "always be a safe house for general Ratko Mladic", the Bosnian Serb wartime commander who was then on the run from international prosecutors.

Critics see Vucic as an authoritarian leader who has failed to live up to his reformist and graft-busting promises, instead sharply curtailing media freedom and centralising decision-making.

Vucic surprised observers in 2008 when he announced he had split from the Radicals to form the centre-right Progressives along with the outgoing President Tomislav Nikolic, advocating cooperation with the West.

The reformed Vucic has described the Srebrenica slaughter as a "horrible crime" and visited the site to pay his respects -- although he was chased from the 20th anniversary ceremony two years ago by an angry stone-throwing crowd.

Vucic's political career skyrocketed after he was named deputy premier following the victory of his Serbian Progressive Party in 2012.

He went on to the top job two years later, winning widespread support with his populist rhetoric.

He has pushed for better relations with former foe Kosovo -- a key requirement of both sides' EU membership bids -- and won plaudits for showing compassion to refugees travelling through Serbia during the migrant crisis.

He now presents himself as a tireless worker, the only person capable of attracting foreign investment and implementing the economic reforms called for by the EU and the International Monetary Fund (IMF).

Little is known about his private life -- except that he likes to strut his stuff, as shown by his appearance on "Dancing With The Stars."