Kosovo heads to polls to vote in snap general election 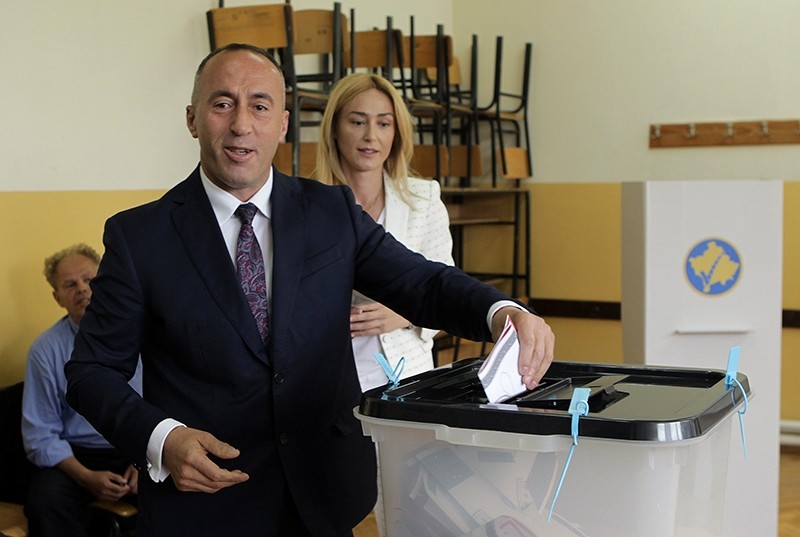 Ramush Haradinaj, candidate for Prime Minister, of the coalition of the former Kosovo Liberation Army (KLA) commanders AAK, PDK and NISMA casts his vote during the Parliamentary elections in Pristina (Reuters Photo)
by Compiled from Wire Services Jun 11, 2017 12:00 am

Voters in Kosovo were casting their ballots Sunday in an early general election for the new 120-seat parliament.

At stake are thorny issues of the border demarcation deal with Montenegro that brought down the previous government, and the approval of another deal with Serbia giving more rights to the ethnic Serb minority.

The continuation of fraught talks with Belgrade — which denies Kosovo's existence as a state — is also a key concern.

Kosovo has been at the heart of controversy in the Western Balkans, facing internal crises between ethnic Albanian and Serbian communities as well as disputes with Belgrade that does not recognize Pristina.

A unilateral declaration of independence from Serbia in 2008 is recognized by more than 100 countries, including the U.S., Britain, France, Germany and Turkey, but tension between Belgrade and Pristina has risen to its highest level since the EU tried to normalize relations in 2011.

The main focus of early election in 2017 is on Kosovo's former Prime Minister Ramush Haradinaj who was detained in France in January, accused of committing war crimes in June 1999 when he was the commander of Kosovo Liberation Army.

Serbia demanded his extradition but French courts have rejected the demand.

One of two major pre-election alliances in the election is the PDK coalition led by Haradinaj.

The PDK, which includes important political parties such as the Kosovo Democratic Party (PDK), the Alliance for the Future of Kosovo (AAK) and the Initiative for Kosovo (NISMA), is one of the electoral favorites.

It was founded by Kosovo's current President Hashim Thaci.

Haradinaj, under the slogan of a "new start", promises to improve the country's health system, economy and production as well as attracting investors from the Kosovo diaspora and says he will abolish corruption while fighting crime and terror.

The 48-year-old was one of the key figures in the former Kosovo Liberation Army during the 1998-1999 war with Serb forces. He still serves as the head of the Alliance for the Future of Kosovo.

He was Kosovo's premier from December 2004 to March 2005, when he stood down to face war crimes charges at the International Criminal Tribunal for former Yugoslavia. He was twice acquitted.

As Haradinaj announced his candidacy for the next four-year term, however, a fresh dispute broke out between Kosovo and Serbia.

Haradinaj has said if he wins there will be no place for Serbia nor for Serbian-dominated municipalities in Kosovo.

Serbian Minister of Internal Affairs Nebojsa Stefanovic slammed Haradinaj's statement saying: "The Albanian side not only tries to make the process of normalization of the relations with Belgrade meaningless but seeks to demonstrate that Serbs have no place neither in Kosovo nor in Metohija."

"Otherwise Kosovo will reciprocally add one third of the Serb land to its map," he added.

"I knew also their bosses [Slobodan] Milosevic and [Vojislav] Seselj. They are their students. They should stand before Albanians with their heads bowed down, considering what they did to them. Apologizing is the first thing they should do," Haradinaj said.

Dacic reacted angrily. In an interview with Sputnik he said: "We should apologize to whom? To Haradinaj, who belongs in prison, serving a long sentence? We should apologize for what? For not giving up on showing the whole world that he, who has participated in crimes, must be prosecuted and end up behind bars?

"What should I apologize for? I didn't commit crimes. He committed crimes. He and his men were slaughtering, murdering, beheading," Vucic said.

Another Kosovo alliance running for office is the LDK coalition led by Avdullah Hoti.

It includes the Democratic League of Kosovo (LDK), the New Kosovo Alliance (AKR) and Alternativa.

Hoti's coalition promises to continue Serbia-Kosovo dialogue, which was initiated in 2011 by the European Union, as it believes Serbian recognition of Kosovo should be the ultimate goal of talks.