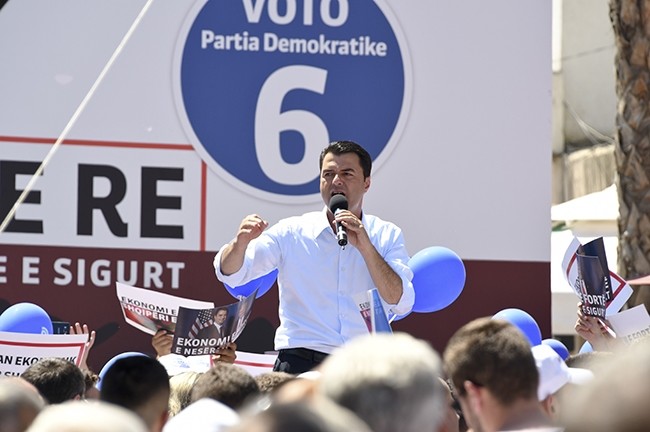 The country of 2.9 million people, slightly smaller than Belgium, joined NATO in 2009 and earned EU candidate status in 2014 but has struggled with key reforms vital for the bid to advance — with the election process at the top of the list.

Seeking a second term, Socialist Prime Minister Edi Rama argues that Sunday's vote, which is being closely watched by international observers, could be a pivotal moment in the country's history.

"These elections in Albania will either open the door to the European Union, giving us a seat at the negotiating table, or we can again slam it shut ourselves," he said.

On Friday thousands of supporters gathered peacefully in three cities for the final campaign rallies of the three main contending parties or coalitions — Rama's Socialists, the Democratic Party of Lulzim Basha and the Socialist Movement for Integration of Petrit Vasili.

Saturday and Sunday are considered pre-election silent days when politicians must suspend campaigning.

The Socialists and the Democratic Party reached agreement in May, ending a three-month parliamentary boycott by the opposition, which charged that election rules had been open to manipulation.

The overhauled rules delayed the election date by one week and handed the opposition greater oversight. The move was introduced together with a battery of other legal reforms considered important for European integration.

Not everyone, however, was happy with the compromise.

It sparked a heated spat between Rama's governing party and its ally, the Socialist Movement for Integration, or LSI and its leader Ilir Meta, Albania's president-elect.

The LSI has been the country's coalition kingmaker in the past two elections, in 2009 and 2013, first siding with the Democrats and then the Socialists.

Both the Socialists and the Democrats insist they will not join the LSI in another coalition.

All main parties campaigned on a reform agenda, pledging faster economic growth, pay hikes and a further reduction in unemployment, which currently stands at a little over 14 percent.

The May compromise produced an unusually quiet election campaign, with parties scaling down budgets and ending a modern tradition of large public rallies and giant banners on buildings.

The battle migrated to social media, where campaign events were streamed live.

A total of 18 political parties and groups will field candidates for the 140 seats in parliament. Some 6,000 police officers will be on duty for election security, while more 300 international observers will monitor the electoral process.