Croatians honor war criminal who killed himself in court 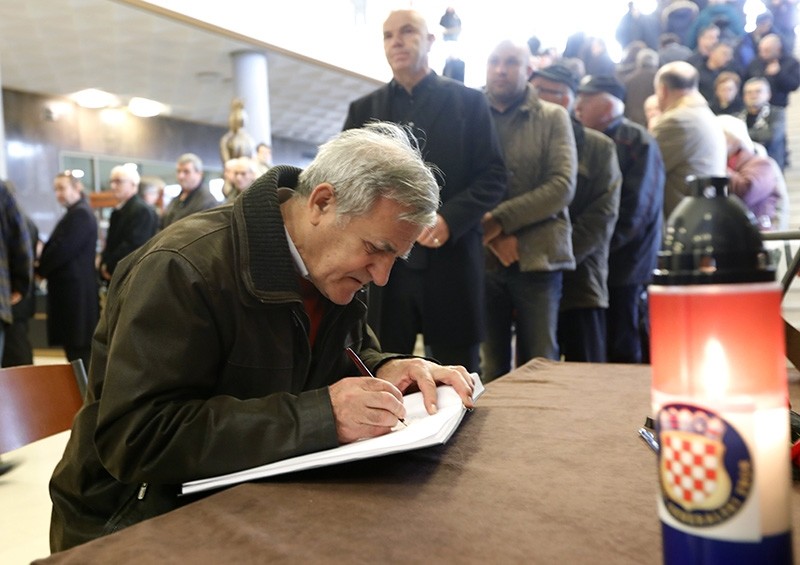 Slobodan Praljak's fans write into the condolence book during the commemoration event at the Vatroslav Lisinski concert hall in Zagreb, Croatia, Dec. 11, 2017. (EPA Photo)
by Dec 11, 2017 12:00 am

Some 2,000 people packed a public memorial in Croatia's capital Zagreb on Monday for Bosnian Croat war criminal Slobodan Praljak, whose final act was to commit suicide in front of U.N. judges.

Public buses ran free of charge to the ceremony for the 72-year-old Bosnian Croat commander, who swallowed potassium cyanide during a hearing broadcast live around the world.

The concert hall where his memorial was held was packed with some 2,000 people, while hundreds more crowed into the building's entry and hallways to watch on giant screens.

Praljak had private a funeral in Zagreb last week, according to reports.

Since Praljak's death, Croats have paid multiple tributes to the late general, laying flowers and lighting candles in town squares in Croatia and Bosnia.

Monday's commemoration, organized by the Croatian generals' association, was attended by a government minister in charge of war veterans issues, and top officials of the ruling conservative HDZ party.

Before the ceremony the visitors were signing two books of condolences.

Praljak, who worked in film and theatre before joining the military, remains a hero to many Croats despite his conviction for war crimes and crimes against humanity during Bosnia's 1990s conflict.

The judges confirmed that Praljak and his five Bosnian Croat co-defendants were part of a "joint criminal enterprise" to ethnically cleanse Bosnian Muslims in the war.

Their convictions were upheld for crimes including murder, persecution and inhumane treatment.

After the commemoration a mass for Praljak is to be held in a Zagreb church later Monday.