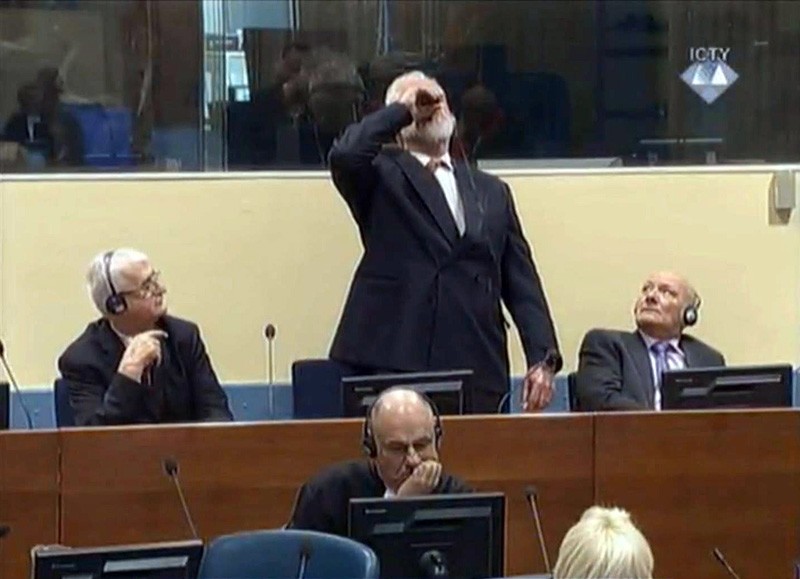 The U.N. International Criminal Tribunal for the former Yugoslavia (ICTY) said it could not be held responsible for the November suicide of Bosnian Croat Slobodan Praljak, which he committed on live TV after his 20-year sentence was upheld on appeal.

An internal investigation released on New Year's Eve "has not exposed any gaps or flaws in the ICTY legal framework with regard to the treatment of detainees" and pointed out how "no measures ... would have guaranteed detection of the poison."

Convicted with five others for ethnic cleansing of Muslim Bosniaks in the 1992-95 Bosnian war, Praljak drank potassium cyanide in a shocking gesture of protest at the November 29 verdict.

The amount of the substance required for the death, was, however, too small to be detected, particularly as the ICTY had no indication of Praljak's intentions, the report said.

"Potassium cyanide can be transported as a powder or dissolved in water. The amount ... required [for] a lethal dose is 200-300 mg," or the dosage of a single tablet.

The report did not determine how and when Praljak acquired the poison, but said that an ongoing criminal investigation by Dutch authorities may shed light on that.

The appeal judgment of Praljak and others was the final before the ICTY closed down after 24 years of work.

Leftover proceedings, such as appeals by Serbs Radovan Karadzic and Ratko Mladic, sentenced for genocide in Bosnia, will be handled by the U.N. Mechanism for International Criminal Tribunals (MICT).