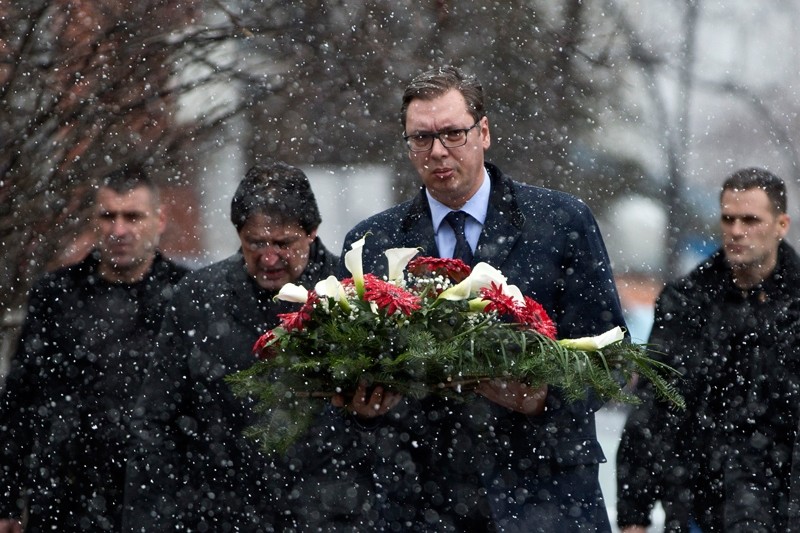 Serbia's President Aleksandar Vucic attends a wreath laying ceremony at the site of the attack where Kosovo Serb politician Oliver Ivanovic was assassinated in the northern, Serb-dominated part of Mitrovica, Kosovo (AP Photo)
by Compiled from Wire Services Jan 20, 2018 12:00 am

Serbia's president is visiting Serb-dominated areas of neighboring Kosovo days after a moderate Kosovo Serb politician was gunned down in an attack that fueled concerns of instability in the Balkans.

Waving Serbian flags, hundreds of people welcomed President Aleksandar Vucic as he arrived Saturday in northern Kosovo. Officials say the two-day visit is designed to ease tensions among Kosovo Serbs following the killing Tuesday of one of their leading politicians, Oliver Ivanovic.

Assailants opened fire on Oliver Ivanovic close to the offices of his political party in the Serb-controlled northern city of Mitrovica. He was taken to a hospital but doctors were unable to save him.

Upon arriving in the town, Vucic laid a wreath at the site of the attack.

Ivanovic, 64, was one of the key politicians in Serb-dominated northern Kosovo, a former Serbian province where tensions remain high a decade after it declared independence. Serbia does not recognize the independence of its former province.

Some 40,000-50,000 ethnic Serbs live in northern Kosovo, rejecting integration with the mainly Albanian state since it declared independence from Serbia in 2008.

Relations between Serbia and Kosovo have been tense since 2008, but in 2013 both parties agreed to participate in the EU-sponsored negotiations on normalizing relations, a condition for both to progress on their way towards membership in the bloc.